Bo Deadly said:
I thought we covered this but the SMPS has to be the right size.
Click to expand...

Yeah, you did
I was focusing on the +/- supply at first, and only now got around to check up on my errors for the other supplies.
Thanks for the info!
A

Hmm... I guess my measurings were off....
I managed to measure up to about 5A when using all faders at once, and up to 8.5A on the 5V line.
Anyways, I've tried to simulate that shunt circuit. The 10R resistor will get quite toasty, but I can manage that heat.
The 12V line does go down to the lower 11's during heavy work, but I think it will ok.
Here's the circuit simulation: 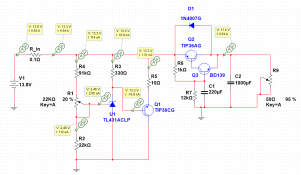 arjepsen said:
Hmm... I guess my measurings were off....
I managed to measure up to about 5A when using all faders at once, and up to 8.5A on the 5V line.
Click to expand...

Yikes. That mixer doesn't look like it would chew up that much current. There are much bigger consoles that don't use 5A on one rail. Those fader motors are hungry.

arjepsen said:
Anyways, I've tried to simulate that shunt circuit. The 10R resistor will get quite toasty, but I can manage that heat.
Click to expand...

What's the voltage across it? I would think the transistor would be taking most of it. But between the two it is 12W or so. You should probably stick to the safe side and get a little piece of aluminum and use resistor and transistor packages that you can mount on there. You could probably get away with a ceramic deal and a PCB layout heat sink for a TO-220. But I would over design for a one-off especially if you don't have a lot of experience with power bits.

arjepsen said:
The 12V line does go down to the lower 11's during heavy work, but I think it will ok.
Click to expand...

If 12V is just for the motors, that'll be fine. If the voltage dropped even more it probably still wouldn't be a problem, the faders would just get a little slugish. But at low 11's you won't even notice.

I would simulate it with a variable load. Meaning put a current sink in place of R9 and modulate the current up and down between 0A to 5A at 1Hz or so. Then look at the dynamics of everything and verify that the shunt is really doing what it's supposed to. I've never made a shunt regulator like that. This is all theoretical.

Also maybe try R5 on the collector instead and study the difference in dynamics. My initial thought was that on the emitter it would be like a sort of local feedback but I'm just thinkin' out loud at this point. I have to think there's probably some clever way to weave the shunt regulator and CM together but I'm blanking on that. I think the circuit you have is about what I would probably try at this point. I would play around with this in LTSpice but I know if I do I'll get caught up in it for hours and I'm supposed to be doing work stuff.

Just double and triple check the power dissipation and manage that heat accordingly. 8.5A is enough current to cause something to burst into flames. Make sure everything is connected properly and you use the right gauge wire. For 8.5A you're going to need some fat wire (18 AWG maybe?) with solid crimped spades and secured properly and so on ...
A

Yeah, I'm using some heavy duty wires for the 5V. Luckily there's a large solid aluminium tray running through the gut of the mixer, that will work nicely for dissipating the heat of the transistors - I think I'll just get one of those small but beefy power resistors, that can be mounted on that tray.
I do wonder if I should just forget about the CM on the 12V line - since this is only supplying the motors, would there be any real benefit of adding the CM after the current shunt?

arjepsen said:
Yeah, I'm using some heavy duty wires for the 5V. Luckily there's a large solid aluminium tray running through the gut of the mixer, that will work nicely for dissipating the heat of the transistors - I think I'll just get one of those small but beefy power resistors, that can be mounted on that tray.
I do wonder if I should just forget about the CM on the 12V line - since this is only supplying the motors, would there be any real benefit of adding the CM after the current shunt?
Click to expand...

You could try it. But again, you then cannot have a lot of capacitance on the line because the SMPS might go into hiccup mode. And if you were hearing a whistle, that implies that something is bleeding into the audio. But that could just be a completely separate problem. We probably should have explored that to completion first before designing circuits.

Grounding is going to be super important with this mixer. With 8.5A peak of 5V for what I can imagine must be digital and 5A peak of 12V for motors, it's hard to believe the thing can pass clean audio at all. You should really take detailed measurements of your noise floor for before / after. Otherwise you'll never know if what you did made it better and it would be very easy to make it worse.

The Mackie D8B is all digital and from ~1998 apparently? That's a bad time period for digital stuff. It is possible that it is of just such and age and design that it could be somewhat inherently noisier than it's analog equivalent. But with study and careful measurements you might actually improve on the old arrangement just by upgrading the PS and maybe tweaking grounds.
A

Yeah, it really is an old thing. The GUI for the console is basically run off an old pc (an old pentium-2 celeron), which is housed together with the powersupplies in a seperate rack unit. The 12V line is fed from the 300W AT supply that also powers the pentium motherboard. The +/- supply, as discussed, was set up as a linear power supply, and the 5V was originally an SMPS
One of my main objectives here, is to get rid of that rack unit - partly because it's annoying, and there tends to be issues with the cable that powers the mixer. But also because computation power is so much smaller and powerfull today - I actually think the gui could easily run off a raspberry pi. Unfortunately Mackie made their own OS for it, which is so specific about hardware drivers, that it can't even run on a virtual machine! (that's a project for another day: write up a new gui....).

I've been looking over the schematics, and as far as I can tell, the 12V line goes to the motors, but also to a couple of 7805's, a couple of other chips (4051B & AD8803/4 which are used for the digital pan pots and faders) which are referenced to digital ground. I did try running the desk both without the 12V grounds connected to the other grounds, and with a 100R resistor between them. Without connection the faders and vpots gets unstable, but it seems they might work with the 100R connection.
On the power distribution board, the digital and analog grounds are tied together, and are tied to the chassis connection.
From what I can tell, the 12V "motor-grounds" were run all the way back to the rack-unit, and connected to ground there, through the 300W AT supply.

The 12V supply does have an audible whine to it. I tried to connect an 8ohm power resistor across it, and that stop it. Unfortunately it doesn't remove the whine I hear in the audio, when I crank everything up.

I've tried to draw up the way things are connected - hope it makes sense: 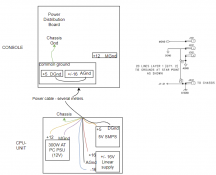 I think the ideal scenario would be that the wires for AGND, DGND and MGND all tied directly to the ground terminal of each supply (and preferably as close to the last filter cap ground if possible) and then there would be separate wires from each to a single point on the chassis and it sounds like that's the case or close.

So you should really focus on the source of the whine. An 8R resistor will shunt 1.5A so what's the current of the SMPS that you're using now? If it's more than 20% or so that should be enough to stop it from modulating. So if you're still hearing the whine then it's coming from somewhere else.

It could be that these supplies are just throwing around too much current to put inside. The only real downside of SMPS is that if they are physically too close to high Z / high gain stuff, the EMI can get into those circuits. Try temporarily moving the SMPS outside of the enclosure. Just let the wires cross outside the chassis and move them as far as you can outside without re-wiring anything. Does that make a difference in the noise level?

But a whine is a sine of an SMPS modulating the output so maybe it's the 5V? Is the 5V constantly loaded with 20%+ it's current capability?

Also note that you should at least rest the cover or backplate or however it's enclosed together so that stuff isn't exposed. And maybe use one screw or something to electrically ground the pieces together. Otherwise you could pickup noise from the environment. Although I don't think that would cause a whine. A whine sounds like an SMPS modulating.

Adjustable Bench Supply won't adjust (at least not as much as I'd like...)