I have an ADR Gemini on the bench I'm calibrating for a friend and I'm running into some odd issues. Seeing as there seem to be some people knowledgable about ADR gear here, hopefully someone will be able to at least point me in the right direction.

First of all- does anyone know the original FET1 used in this compressor? I am not 100% certain the ones installed are original, as they are rotated in the socket to compensate for a different pinout. What's in there now are 2N5462s. 2N3820 is the only other FET I've found that actually fits the pinout properly that has similar characteristics, which makes me thing that might have been the proper original. Either way, I get similar results trying both FETs in that position so maybe the point is moot.

So I'm going through the calibration procedure in the service manual that's posted here in the tech docs section.
I start with a -40dbu 1khz sine wave going in, with all trimmers and pots at the specified positions.
GR cal works fine, on to the next. Turn FET Bias all the way to the left and I should read -3dbu. I get around -4.5dbu. Reasonably close, I'll move on.
Turn all the way to the right and adjust range to get around -36dbu. I'm able to do that, although the range trimmer is very far to the right, around 3 oclock.
Then, adjust FET bias for -6dbm. Again I'm able to do that.

Now here's where I get a bit confused.
I'm supposed to increase the signal to -12dbu, which is an increase of 28dB.
The manual states that I should read +12dbu on the output, yet going from -6dbu to +12dbu is only an increase of 18dB. I should add that up until this point, no compression is engaged as the manual states it should be at 1:1.
So I'm wondering if -12 is a typo and it should be -22dbu being fed in.

At this point I'm not really sure how to continue as nothing behaves as the manual expects it should and somehow I'm getting more compression at 2:1. I get that maybe the threshold is lower at lower compression ratios, but it doesn't explain why the manual states I should see a similar output at 2:1 as well as limit.


Any help is appreciated!
D

Hi, I can't help you with your calibration issues. But I just opened up mine, and FET1 is a 2N5462 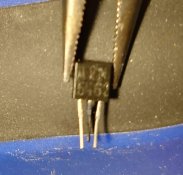