Hey, I am having some trouble on the 1176 schematic concerning the LM7824 Regulator.
Please correct me if I am wrong. On the schematic the 30V output comes out of the Pin 2 of the regulator which is the GROUND pin according to every 7824 datasheet I found.
This bugged me a lot so I went to doublecheck in the PCB schematic which takes the output from Pin 3 (the actuall output according to the datasheets).

Is this a typo in the schematic?

Your pin numbers refer to the TO220-type housing, the original probably used the TO-3 which has a different pin numbering system..

As you have already guessed, the PCB is known working

Hi everybody ! I have bought a dual 1176 build from another user and I am in the process of making sure everything is calibrated. it is Revision J so the G1176 and Ive looked at many posts on how to calibrate it : https://www.xenoworld.org/wp-content/uploads/2011/07/g1176ln-calibration.pdf the official Gyraf and also from hairball audio which I have followed to make sure I have the right Voltage from output so I did the Q bias adjustment to drop 1db but I was supposed to somehow shorten Pin22? I don't understand how that is done... is pin 22 the 22 label on the board?

Now they seem to behave well and the meter adjustment to 0 is ok but one compressor has a much higher output level when output is all the way up...

Either way, should I redo that process with pin22 shorted? and what to look for to match output levels on both units? ideally if I could match the outputs from both units then I could just rely on my ears for stereo comrpession

pad22 should be labeled on the pcb, you need to short this to ground when doing the bias adjustment

regarding uneven output levels, how many dBs are we talking about ? is it happening also when the compression is switched off ?
some mismatch is to be expected because of component tolerances, potentiometers in particular tend to have high tolerances and that means even if they are set in the same position the resistances are different.

some basic troubleshooting could be done by injecting a test tone into both channels and follow the signal flow from input to output with oscilloscope or ac voltmeter. you should be able to find where the mismatch is generated and possibly solve the issue by putting matched components in that section.
M

That makes sense... I checked the Mnats videos but the connectors are places differently on the G1176 board. 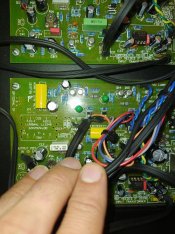 Is it where it says 22? next to the empty Lundahl slot
B

First of all check the dc voltages with no signal applied, on Gyraf website there is a schematic marked with reference voltages.

Once you confirmed the dc measurements are ok, input a sine wave and take measurements in the audio path from input to output with a scope or ac voltmeter. Should become obvious where the level mismatch is happening
M

First of all check the dc voltages with no signal applied, on Gyraf website there is a schematic marked with reference voltages.

Once you confirmed the dc measurements are ok, input a sine wave and take measurements in the audio path from input to output with a scope or ac voltmeter. Should become obvious where the level mismatch is happening
Click to expand...

Thanks, I spent the morning going through the voltages and it turned out Q15 is busted. need to replace that and check again.
On shorting Pad 22 all I need to do to connect it to ground?

Hi there, is the 1176 clone on the Gyraf site still upgraded ? Is it the last revision ? Thanks

yes, that one is the latest version - and the one discussed all through this thread..

There are reservations, like remember to cut the ground trace at the edge (like mentioned earlier in this thread), but other than that it's the reference design..

Hi all new here so be gentle, I have had a go at building the G1176 using the gerber from Jakobs site I get the correct voltages at the reg and diode at +30.07 and -10.01 so they look good. I am really struggling to get it to pass signal past the 27k resistor at the bottom of the board. I have thus far had a faulty input pot, dodgy Chinese FETS reporting as BJT-Ns etc. I have swapped the fets which are reporting correctly now using Philips BF245Bs and the BC107bs look good and giving a high hfe of above 245. When I probe the BC107s I get the correct voltages but I am not seeing any signal in any of the circuit past this point using my scope. I have tried swapping them out for new BC107s, and am using all the semiconductors that were originally recommended so there are no pin compatibility problems to rule this out even though they were difficult to source they look good.

where is the next place I should be able to pick the signal up after this point on my scope? it's definitely not getting to the output pot or the output pins on the board... but I am at a loss now as to what to do next. Attached photos of the scope output for music vs probe points... after this point it gets lost.

so you have signal at the top of the input pot, and variable signal at the viper of the pot, going into PCB point2 - but loosing it entirely after R6, the 27K

as you have found, JFET's are problematic to source recently - most of them are fake. Try without the FET for checking your signal path

Do you have approximately correct DC voltages around Q2-3-4?

Very strange numbers should I be applying the 1khz signal? are they all screwed should I swap them out?

..and from measurements, your Q2, Q3 looks like they're gone - can't tell about Q4
P

Well I am having fun with this, desoldering q1 from the board pulled the copper tracks off it... so looks like I am rebuilding a new one.

If I get the power supply going first and then just concentrate on the bottom section where the preamp is there anything else will I have to populate for it to work?

if you loose a PCB trace, just replace it with a small piece of wire you cut off a resistor. scrape off the solder resist from the pcb trace where it's still good, and solder onto there..
B

I have a g1176 on my desk that I built about 8 years ago. I built 3, 2 for me and 1 for a friend, my 2 have never had an issue and I assume his unit worked fine when I gave it to him, otherwise I would have fixed it then. He just gave the unit back to me as he's been 100% ITB for some time now and said he never used it. Unfortunately its not working properly and I'm trying to diagnose what the issue is but its been a while since I've done DIY. It was built with Lundal trafos on Input and Output, It passes audio, input and output knobs amplify and attenuate the volume respectively, the meter works for I/O, I can use it as a fuzz box, but it doesn't compress. I've referenced voltages at the points noted on the schematic and they seem to be where they should be. I'm a little stumped and not sure what the issue could be or what I should do next.

P
Before You Begin Your DIY Journey...