Glad you found it!

This is your first build, right? I think that we all get really excited at the beginning and think, "I want to do all sorts of customizing to this and that's going to make it perfect" (however we are conceiving of "perfection"). I have to tell you, projects like the Hairball have been tweaked and refined to be very high quality over years and years and a multitude of builders, and I honestly don't think you're going to gain much, if anything, by trying to swap out iron or components or what-have-you. The Ed Anderson transformers are very meticulously designed and do not lack anything. I have a Rev D in my rack that I'm looking at right now, built completely stock, and I have never wanted to change a thing about it. These units aren't the KT/WA/etc clones where we might expect cheap parts and cut corners (though to be fair I don't have experience with either of those companies' 1176 models). They really are pro standard right out of the box.

I only say all of this because I recognize your excitement about adding the best gear possible to your studio AND your frustration when you get stuck on the little things. Don't get bogged down in it, it will mostly just create more stress around what should be a fairly easy, enjoyable build. With these units, someone else (mnats, Ed Anderson, Hairball) has already gone down the rabbit hole of tweaking and perfecting things so that you can just relax and build it.

I'm sure you're right. My only big hand up with it is that there are a limited amount of original parts in the world so it would be impossible to, for instance, have an original input transformer for every unit.

With that said, I understand exactly where you're coming from with how they've spent years doing the tweaks already and that it's already got just about the best possible components already.
I didn't just think "Shit. I can't afford a bluestripe. I guess I'll try to build this, since it's all I can afford". I listened to too many units to count both in videos online and plenty in person using ones other people owned. After 3yrs of listening and comparing countless variations, the original and the Hairball were my favorite 2 (with the Bluey coming in 3rd) and the only ones I often couldn't tell apart.
That's a pretty big deal because I can ALWAYS tell a difference. Occasionally, I prefer the knockoff on a particular source for a particular sound (for example, the WA Buss Comp knockoff has more punchy low end than the real thing and that may be preferable on a hiphop drum buss from time to time) but I can always notice the difference.

The reason I focus so much on accuracy and she'll out for the original everytime up until now, as opposed to just being good/bad, is that I like consistency for my work-flow. I might be mixing a song for a client using SSL Native Buss Comp 2 or CLA-76 and suddenly decide it needs a little more life (analog) but its already perfect otherwise. In that case, I wanna swap the plugin out for the real thing and keep going. Maybe I'm remixing a song I already got approval from the client with a couple notes and wanna make that swap in the process. Maybe I started at another studio with an original and need to finish in our studio. The possible scenarios can go on and on but the point is that sounding as expected is often key.
It probably sounds stupid but thinking like that has served me well for 2 decades. My meticulous nature's and discerning ear have earned me a reputation with local musicians that's on par with far more accomplished studios in the Detroit area and I take a lot of pride in maintaining that reputation.

I also think you're right that I'm way over-thinking it because it's my first. I've learned so much in the last few days. Stuff I didn't know that I didn't know lol.
I'm a very fast learner though and have no doubt I'll easily build the next one in a single afternoon.

On a sidenote:
When I was in college studying audio-engineering, we covered a lot of the science behind how EQs and compressors work from the electrical engineering standpoint but (here's something I've never mentioned, let alone admitted) I fell ill with a deadly illness called Gillian-Barre Syndrome one semester and missed a month of school. I'd already completed an apprenticeship and worked at a commercial studio before ever taking a course and the teachers all new that so they never made me makeup the work I missed. Within that month (from what I can tell looking back at the textbooks) is the stuff I should know about ADC/DAC, maintaining equipment, and the much of what I'm learning through this project.

Anyway, what I'm getting at is that I really appreciate you guys.

No doubt, I think everyone here can definitely understand where you’re coming from and is happy to help!

I'm almost done but I ordered a small batch of RCA 2N3053 (NOS/gold leads) to replace the one I forgot to add the spacer to. They can't ship until Monday so I've got time to go over my work and order parts for any more mods I decide to make, if I choose to.
I presume this black plastic W-shaped thing is the heatsink I'm looking for.
The top socket on my Meter Switch is crooked, which is preventing me from being able to plug anything into, so fixing that is on the agenda. I also have the ceramic caps, XLR, Active Switch and some test-posts to build. I just can't imagine that taking very long.

Update:
Got the cap I messed up off. Just took a little will-power. A small amount of solder had come to the surface and basically added a little "surface-mount" to it. That appears to be what the problem was with getting it off.

Added the transformers. Just need a good DMM, the new 2N3053 to arrive, then calibrate & test. 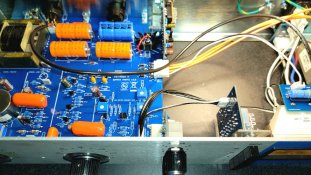 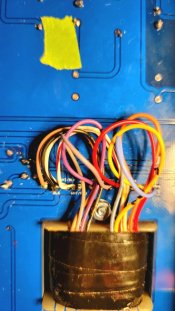 Got calibration ready to go. All set on the input... Wrong reading on the output.

Output readin 0.4mVAC, doesnt change whether I turn output knob to center, all the way left, or all the way right. That seems like a bad sign.

Any idea where I should start checking for mistakes? Could the question of whether or not I need to repair the contacts for the TO-39 transistor be the answer to the problem? Or is it definitely something else?

My Hairball 1176 kit has has the wrong resistor. Use whats in the box or order the right one?