abbey road d enfer said:
Define "open" and "pinched". Someone has to invent an openness meter and a pinch meter.

Several have undertaken the issue, and came out with current feedback opamps.
Some are quite remarkable, e.g. LT1795 or ADEL2020. They are not cheap though. They are not plagued with the G.BW limitation. For some reason audio designers have neglected them, so the only available are not really suitable for audio; they often lack voltage headroom (due to low rails) and are optimized for high output current, which is not always necessary.
Click to expand...

It's hard to describe, but it's something you can't see on a meter, because you have a complex amount of tones going through it (music). One way I test things like this is to run them in parallel with one out of polarity, sum them together and null them. You can then hear what's different, then go back and find those things in each. This method works well for comparing mic pres, matching EQ settings and matching compressors. It's all about training your hearing. To me, open makes me feel relaxed and happy, pinched makes me examine it instead of enjoying it.

abbey road d enfer said:
I can't speak for John, but large capacitors are efficient antennae, which could create problems of HF rectification and unstability due to unwelcome parasitic capacitance.
Click to expand...

Keep in mind that a large cap is also wound, which gives it inductance, and that usually cuts that down. Though I did have a Japanese DAT machine DO-9 by Panasonic that had all the caps wrapped in nice little copper condoms. I would expect it was for radiation more than pickup. And device that is in a chassis isn't going to pick up much radiated RF, except for the input and output jacks.

abbey road d enfer said:
A question: What is a "purist" in this context?
Click to expand...

swpaskett said:
Many years ago I was doing sound reinforcement in churches where they insisted I drive the installed system because "speaker boxes are ugly," I learned the transformer was my friend. If you don't know what you are driving, a good bridging transformer and a handful of pads are hard to beat -- it almost always works -- even when the output driver is poorly designed.
A question: Has anyone ever met a purist who has actually worked in the industry? I haven't...
Click to expand...

Correct. LOL! When I see the $100K speakers, the CD player with the pet rock on it, the ICs painted with special silver paint and the speaker wires on little telephone poles, I say "Thats a lot of money to spend on listening to a 44.1K 16 bit CD." In a 8X8X8 room... With an AC plug that goes into a $5K power conditioner, plugged into an AC outlet that has 14GA wires pushed into the rear of the AC receptacle, that daisy-chained to 3 other rooms... (though I am guilty of designing a digitally controlled room EQ that could go to 1/12 of an octave to kill the 3 most prominent standing waves in rooms like that for a hifi company)

First of all, I have never tracked, overdubbed or mixed any record on or through anything in that room, Plus, the guitar player was hung over, the drummer was strung out, my assistant was sleeping, I was up for 40 hours straight, the producer was coked up and the manager was hitting on the coffee person. And of course, we mixed it through NS-10s, cut a lacquer, played it on a TT, transmitted through a small AM transmitter fed by the same audio chain as WLS and listened to it in the car. Having said that, I do enjoy a vinyl record playing through my Manley Stingray tube amp.

Of course I was banned from this HIFI blog for posting this: 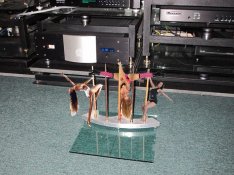 The sticks and base are supposed to eliminate standing waves in your listening room. I took the liberty of adding the pole dancers...

Multiple later op amps were available in unity gain and decompensated versions. The iconic NE5534 will remind you of that if you attempt less than 10 dB of closed loop gain, while the more popular(?) NE5532 is unity gain stable.

And the 741 sounded really good... I remember when the 5534 first came out, the guy that helped design it said that it was optimized to maximize the spec with the 10K square waves they used to measure slew rate...
A

FIX said:
I remember when the 5534 first came out, the guy that helped design it said that it was optimized to maximize the spec with the 10K square waves they used to measure slew rate...
Click to expand...

Which shows that sometimes, designing for numbers can result in satisfactory subjective results.

As long as you design for the correct numbers.

Product design is a simultaneous equation with multiple variables to solve for (including cost). Over reliance on one single metric can allow others to suffer.

Square wave testing involves multiple performance metrics. Over reliance on how the square wave looks can be a distraction (like a square wave with upper harmonics scrubbed off by a digital filter).