I've been a long time lurker on this forum, and i've learned a lot reading it.

Today, I need some help with a little project of mine.

I play in a small punk-rock band, we mostly play in small clubs where guitars won't be in the PA.

The problem we encountered is that we have two guitars, but the lead singer is not playing all the songs. So when he's not playing, the guitar level drops down, which is not good for the overall sound.

So the idea is that when the lead singer doesn't play his guitar, the rythm guitar would play through both amps. This way, the overall sound doesn't change between songs.

So far, we've been using a simple switch to choose between guitars in combination with a ground loop isolator to get rid of hum. It works well, and we are now using it as an effect on some song to vary guitar volume (switch between one and two amps on some intro...)


So I thought i could make custom switch box that could allow some improvement:

-keep the cable runs as short as possible
-having one or several remote switches. we some time play larger venues, and it would be nice to be able to command the switch from different stage positions.


Here's a drawing i made of the general idea: 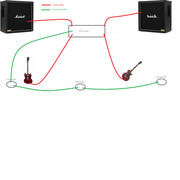 Now with my issues / questions...

-If the box fails, both guitar should play through their dedicated amps. So i'd like to keep signal path passive and use a no-latch relay for switching.

-guitar amps must be isolated with transformers. WHich would be the best? For now, i'm using OEP A187A12C 600ohms 1:1 transformer in my ground loop isolation box and it works, but maybe it would be best to use a 10k:10k? which model would you recomend?

-should the two guitars share the same ground? I'm a little concerned about sharing the same ground while being across a large stage... So I thought we could have both guitars floating. Not sure if it's a real problem though.

Attached is a schematic with, i think, too many features. I put 4 transformers and two buffers, but added ways for bypassing them, so i could try it and tweak it if necessary.
I think I won't use input transfomer nor buffers for a start. And also join both guitars COMs. schematic doesn't show command circuit, but i left that on the side for now.

Schematic doesn't show command circuit, i'd like to be sure about signal circuit first.


If anyone has any advice about it, it'd be really appreciated.

Each guitar works direct. Both guitars may share the same ground. The only ground issue is the two amplifiers. In many venues, plugging both into the same power strip gives acceptable buzz; however you may need isolation. You really only need to isolate one amplifier.

Thanks a lot PRR, you confirmed my thoughts.

Would a 10k:10k transformer be better suited?