So every half decade or so I seem to buy a studio at auction. This time I ended up with 5 Redco DB25 - TT patchbays and a fu¢k-tonne of DB25 cable. A lot of it has the cut in half blues cause it was just me removing and the contractor hadn't kept things as free and easy as yr pal Crazy Paulie. But there's a fair amount of 8 channel DB25-DB25, DB25-XLR and DB25-TRS and there's a LOT of 8, 16 and 24 pair terminated in either DB25, XLR, or TRS on one side. Its mostly Redco with a smattering of Gepco. XLR's are black Neutrik with gold. TRS are Black Neutrik with silver. I opened up a few of the DB25's and they were TASCAM, so I'm going to go with that.

I've also got some Dynaudio Air subordinate devices and mic stands for anyone who fancies a trip to Charlottesville.Additionally there's 12 channels of Behringer Powerplay monitoring, a half dozen Alesis 3630's (yay) and a small mound of video adapters/cables. AH and groupDIY gets first crack the rest will end up on the Reverb probably around the end of the coming week I'd reckon with prices a bit steeper as Crazy Paulie hates paying fees.

Of course, whats one of the reasons Crazy Paulie loves living in America? Everything's negotiable.
Last edited: May 25, 2021
F

This is everything 8 channels/pairs and up that I have 70%-ish off new for complete cables and parts price rounded down and cut in half for the cut in half blues special. I've chimed out some of them and verified TASCAM. Tomorrow I'll get a notion of what there is in 4 and 2 pair and I'll make certain all the snakes labelled with a "Dxxx" are indeed TASCAM. I've also got a Sony PCM-r500 DAT. It turns on but I have no DAT's with which to verify operation (I also must confess that there are no cassettes in my life anymore, apart from a few 1/2" reels and VHS from my wifes first career, no linear media of any kind.) So if anybody wants it for parts/repair value feel free to reach out. 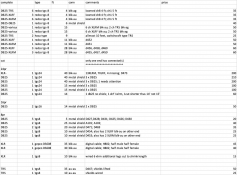 Location
third stone from the sun

I took some pictures

Going fast but I still have some stuff. Let me know if I can be of help to anybody.
F

Man have I shipped out a lot of cabling! I've just noticed that I've got a big box of DB25 with 2 pair or 4 pair cable attached to make up a 2 channel or 4 channel snake, mostly shorties ~5 feet or so. If interested let me know.

All the other cabling is down to this:

reverb.com
You must log in or register to reply here.