rock soderstrom said:
I'm running out of ideas. I would also disconnect the output transformer and see if the naked amplifier also shows the behavior. A good idea would also be to trace the signal through the individual stages and see where the high frequency are lost. Be careful with your interface! HT!

Have you replaced the tubes?

How about an additional test with REW or RMAA?
Click to expand...

Thanks, I will try without the output transformer.

I have replaced tubes, and I’ve also tried tracing the signal with a scope. Right at the input I see HF loss with the input transformer connected (very slight loss), then after each tube there is slightly more loss, so it’s just been very hard to trace where it is occurring.

So, for an input transformer designed to work from a design centre value of 200 ohms (which the original REDD.47 was), the 40dB pad I mentioned above will be suitable to use for determining frequency response.

I'm not saying these are the only reasons for the top end droop on your plots, but they should be looked at before any definitive evaluation is done.
Last edited: Jul 14, 2021
G

So, for an input transformer designed to work from a design centre value of 200 ohms (which the original REDD.47 was), the 40dB pad I mentioned above will be suitable to use for determining frequency response.

I'm not saying these are the only reasons for the top end droop on your plots, but they should be looked at before any definitive evaluation is done.
Click to expand...

Thanks! I’ll try the 40dB pad and see if there’s any improvement, although the HF loss is still there with a mic.

I have removed the zobel after the sowter input so currently it is just straight into the primary, and then secondary straight to the ef86, but no improvement.

So does this mean you are not padding down the output of the UAD before feeding it into the mic pre? If not you could easily be overloading something. I would recommend using a 40dB pad (which you can make from a couple of 7K5 resistors and a 150 ohm resistor).

ruffrecords said:
So does this mean you are not padding down the output of the UAD before feeding it into the mic pre? If not you could easily be overloading something. I would recommend using a 40dB pad (which you can make from a couple of 7K5 resistors and a 150 ohm resistor).

I have had the output attenuated about 40dB out of the converter so it shouldn’t be anywhere near clipping the input, and I’d imagine I’d see the distortion on the sweep if that were the case.

I guess I’m just unsure whether the way I’m testing it is an issue as the hf loss is there even with a microphone plugged in.

There is a polarity switch on the output that is using a relay to flip phase, and other than that nothing is different from the schematic. It’s hard to know if there if some fault on the pcb itself, but so far everything I’ve traced seems correct.

It’s really got me puzzled now!

There would be noticeable level differences obviously but, are the cables consistent through the different tests? A broken pin connection could maybe act similar...
G

scott2000 said:
There would be noticeable level differences obviously but, are the cables consistent through the different tests? A broken pin connection could maybe act similar...
Click to expand...

Cables are all ok. I'll have to give it some more time early next week and see if I can find any silly mistakes I've missed somewhere. I may even just recap the entire pre, just in case anything is playing up there. I'll also bypass the pad and phase invert relays and have it all configured as simple and straightforward as I can, and if that doesn't change anything I may lose my mind slightly

Seeing as there is no schematic for drip's board, and I also no longer have the documentation for the build, I overlayed the top and bottom of the pcb so it's easier to follow traces. I've since removed the zobel.

Cranehazard said:
Personally my opinion is caps in those locations are a band aid to cover for phase shifts and oscillations in the negative feedback network.
Click to expand...

The caps in parallel with the series feedback resistors do indeed correct for phase shifts, from the output transformer.

I built REDD.47 amplifiers with 3 different types of output transformer myself and, from memory, I was able to decrease the values somewhat, but not eliminate them. Doing so puts the amplifier on the verge of oscillation at the lowest gain settings.

I never built a unit using Sowter transformers though so the values I used won't really be relevant to the OP.

What does Drip say about this?
C

Maybe it's a bad value in those pf caps in the feedback network. That would definitely kill the high end if too high a value was In there.
G

Ok so I have played around with different cap values in the feedback. With no caps at all, at 34dB gain it is almost flat, but still down 0.5dB starting from about 5-7k. Then at 46dB gain it rolls off almost as bad as with those caps in circuit. Any value caps in the feedback causes some roll off. I have gone over the transformer wiring many times but cannot see anything incorrect.

So currently I have no CT connected on the input side and no zobel. Any value caps I've tried in the zobel will cause some roll off. I also have no feedback caps, and this is the best result so far (still not quite there) but only at the 34dB and 40dB gain settings.

Unfortunately, drip is silent and not replying to my emails.

I had the scope on the secondary and watched the amplitude shrink as the Hz went up. At the moment the secondary is going straight to the ef86, by resistive load are you talking about the 100k resistor that is part of the zobel? I've seen that strapped across the secondaries in 1 schematic but at the moment I've removed it completely.

gg85 said:
At the moment the secondary is going straight to the ef86, by resistive load are you talking about the 100k resistor that is part of the zobel? I've seen that strapped across the secondaries in 1 schematic but at the moment I've removed it completely.
Click to expand...

There is a 1M resistor, for the DI input. (2 in the photo). What is this 68k resistor for? A pad for the instrument input or the termination for the secondaries? These are not shown in the original schematics.

What are 1 and 3 (parallel cap for cathode cap?) in the photo? Can not read it. Could you please post a overlay with higher resolution? 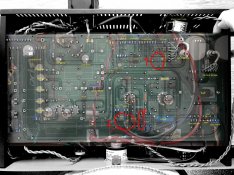 Edit: Top PCB design! I always enjoy to learn from the best in our business! This is art and real art needs no schematics! Will it ever work flawless??
Last edited: Jul 20, 2021
G

Try this for hi-res

The DI input to me looks the same as a regular guitar amp input. With 1M to ground and 68k grid stopper. I'm not sure about #1 as I no longer have the documentation for this PCB and have no idea how to get it. Nothing on drip's site, and no email reply so I think it's a lost cause. On the PCB it says TERM ALT 1 and TERM ALT 2, #3 is a 1k resistor, R4 on the original schematic. There are a few areas on this pcb with alternate footprints for larger (physically) caps.

I will definitely be moving that relay closer once things are working, this was one of my first builds haha, a lot about it makes me cringe a bit, but I have bypassed that relay completely for now with the XLR in going straight to the input transformer primaries.

Yep I think you're right. I think the issue i'm having is definitely impedance related. The reference mic i used is probably used to seeing an input with higher impedance. I think that's what's been throwing me, because i would understand it if it was only the line out from the Apollo causing the HF roll off, but because i am hearing it and seeing it plotted even through the mic, I assumed the problem was in the amp. I will build up a U pad and see if this flattens my response.

I always thought, seeing as these pre's were used with condensors back in the 60's, I shouldn't have any issues. But I missed the fact that those mics had much lower output impedances when comparing to something newer.

Hopefully I'll find some more time next week to make up the pad and see what happens, but judging by the response I got when using the A-10 50k:600, i think maybe rock soderstrom may have been right by saying I've been chasing ghosts.

If I have a switchable pad, something like 10k:60, for use with modern condensers, I'm not sure if I'll be dropping too much level before the mic pre, but that should bring the mic down to vintage impedance specs right?
C

Try reducing the value of the 330k resistor in between the stages. Maybe its acting as a grid stopper and reacting with the miller capacitance of the next stage, creating a low pass filter. Seems like a huge value! I have seen modified schematics of the redd 47 with this as low as 1k. You might have to sacrifice historical correctness for functionality. Maybe new tubes have more miller capacitance. Using an online grid stopper calculator puts the rolloff starting at around 5k with the 330k value. Maybe they were trying to kill a hf peak created by the original input transformer. This is all just conjecture.
C

Also, try it without the 1M6 resistor. It looks to me that this negative feedback loop is out of phase with the other.

The OP has already said he is losing hf at the input transformer. Thats his problem. Its pretty straightforward.