Hi, I made a stereo reverb unit using a Klark Teknik DN360 EQ, a spring reverb drivers and two type 9 tanks.
everything works and sounds great.
The only issue I having with this unit is that every time I move the EQ faders on the front panel I can hear the springs wobbling.
I'm trying to think of a good way to isolate the springs from the chassis and to be able to change the EQ settings without unwanted noises.
Any ideas how I can isolate the tanks?
Here's a demo of the spring reverb unit (with the wobbling noises):

Maybe some reading through forums about turntables or speakers in regards to different ways of isolation could give some ideas on materials or techniques..?like steve hoffman forum or something....

Depending on how much room there is under the tanks, maybe an inch thick layer of low or medium density foam rubber might help. A fabric or craft store might carry it. Or check with a local upholstery shop, if there are any still around. They might just give you a scrap or two.

Sit the tanks on top of that, and where you have them screwed to the chassis, use those small rubber grommets that we sometimes insert in chassis holes to pass wires through.

Yeah, some great ideas there. I was going to suggest the thick rubber standoffs that you see in shockmount rack cases for vibration insulation too (and for mechanical hard drives), but I'm sure the suggestions above will get you there.

I also wanted to say I very much like the sound of both the reverb and your mix there! Gonna have to build myself a spring reverb at some point now.

If you want to *really* isolate the takes, they should be in an external enclosure to keep the transducers away from mains and other nearby sources of EMI. That alone can reduce hum by quite a lot. But clearly that's not what you're going for here so ...

In this case I would say you want to suspend the units with shock mount cords and add mass. More specifically, if you're going to add mass, you might try to find or construct a metal enclosure that can be electrically connected to the tank shells which should be grounded. Steel is better than say aluminum because it also provides some electromagnetic shielding and not just electrostatic shielding and of course steel will have more mass than aluminum. And obviously it has to be small enough to fit inside the enclosure and big enough for the tanks which is to say you will probably want to have someone make it using a sheet metal break. If you really don't have the room or patience for that level of detail, maybe just find a flat plate. Bolt the tanks together and to the metal enclosure / plate using stand-offs to make one rigid hefty unit. Then get four shock mount cords (you can find these for sale in lots of places searching for "shock mount cords" if you don't already have some old ones laying around), find some brackets to connect to the standoffs / plate and outer enclosure and suspend the whole inner, now hopefully heavier enclosure / plate with tanks so that they are softly suspended and giggle freely when touching the controls.

That should knock down the noises but again, the tanks should really be separate and stuffed into the ceiling in a metal box wrapped in padding at the end of some CAT6. Although I've never done that, I would bet dollars to doughnuts that would drop the noise by 10 dB at least and noise is the Achilles heel of reverb tanks so that 10 dB would make a big difference in fidelity.

The Telefunken Echomixer has the springs on...springs. So that's an idea. 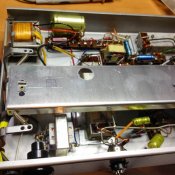 A spring damper system to hang the tanks as others have described.
Look at how the tanks are hung in the orban 111b in this picture. I have one of these orban units and it works well.

the tanks should really be separate and stuffed into the ceiling in a metal box wrapped in padding at the end of some CAT6
Click to expand...

No, the pickups aren't balanced on these so you'd have unbalanced cables running to them. No CMRR rejection. I can't think of a single spring reverb unit that isn't self contained.

Mechanical lowpass filter. Add weight to spring units and hang them in springs until their complete self-resonance is well below that of the individual springs..
S

Thank you all for your replies!
The reverb is quite quiet and there is no hum since the PSU is in a different box away from the springs and there is no AC inside the box (except from the audio signal).
The problem is only with mechanical noise that occurs when I'm playing with the EQ faders. I'll try to install the springs in a different way, maybe like in the Orban 111B. I'll see what I can do with the limited space inside the box.
S

Thanks, the reverb is post EQ, so I can cut / boost frequencies before the spring.
After the spring I have a parametric EQ on the desk for more manipulations.

I would like to try to hang both tanks with an external springs from the upper part of the box.
The weight of the two tanks is 1.25 KG. What type / strength of springs I should look for at the springs shop? (I really don't know anything about springs...)

LIke Gyraf said, you're essentially making the mechanical equivalent of a low pass filter. So think about a simple weight on a spring. A stiff spring and light weight results in a higher resonant frequency. A soft spring and heavier weight is lower. Your weight is largely fixed being defined by the weight of the two tanks. But of course you want to bolt them together so that they are one mass. Then use the softest springs that still suspend the tanks without bottoming out. So more soft springs is probably better. Like two in each corner. Or a shock mount cord at each end that makes 4 or 6 or maybe even 8 trips between the tanks and the chassis.

smilan said:
I would like to try to hang both tanks with an external springs from the upper part of the box.
The weight of the two tanks is 1.25 KG. What type / strength of springs I should look for at the springs shop? (I really don't know anything about springs...)
Click to expand...

I'd get a few springs and try them out. depending on how far they are stretched they will exert more force so the spring length and your mounting geometry matters.
F = k*L

I think you want to use 4 springs per tank holding it at all four corners. Not just hanging from the top. The Orban does this but it's hard to see in the pic.


Bo Deadly said:
But of course you want to bolt them together so that they are one mass.
Click to expand...

No you want to decouple the two tanks so you don't have bleed between the channels. Notice they are hung separately in the Orban and there is a steel plate between the tanks for shielding.

If you alter the spring mounting strategy keep in mind that reverb tanks are manufactured for specific vertical or horizontal mounting orientation. This is done to account for spring sag and mechanical clearance.

i used a t shirt and a couple of tie wraps to silence a Fender Blues Jr pan, they guy brought it in a few weeks ago to play a sidewalk show in front of the music shop, it still worked but i was embarrassed that i did it that way,
T

You could use the old fashioned padded vinyl tank covers , screw that in around the edges so the tanks themselves hang with a droop a couple of cm's under the lid .
You get good resistance to LF wobbles but also a reduction at higher frequencies from any tendency to feedback due to physical vibration . Its simple its proven and it works in the context of a guitar combo amp , it would be like deciding to build reverb tanks into the studio monitors ,

All too often in reggae reverb tank hits are actually part of the sound , its metal hitting metal,
As an alternative Ive often used small felt pads to buffer metal to metal contact in tanks , between either the springs and the back plate or back plate to tank housing , if the tank is knocked inadvertantly or for creative purposes it less like a gunshot in a cow shed and more like a minor disturbance in softly furnished theatre or auditorium .

Another thing I tried was a damper that could be brought into contact with neither, one or both springs it behaves like 3 position tone switch .

I have to agree with Tubetec here. The padded bags have been used in Fender amps since, lets see, the 60's. Maybe earlier, but I wasn't fooling with guitar amps before that. That bag stops some acoustic transfer of energy to the tank.....................which is pretty bad in a combo amp. The other suggestions of adding mass and softer springs are also good..................remember omega= SQRT( k/m) I think I recall from school. Omega is the resonant freq(radians), k is spring constant(stiffer spring has higher k), m is mass. Don't know if this helps you.
S

Thanks again for all of your comments. The isolation that required for a guitar amp is not enough for a studio application. I've tried to make a construction like the one in the Orban 111B with no successes.
Eventually I decided to take the springs out of the EQ's chassis and put them away.
As long as I'm keeping the springs away from electromagnetic fields there is no hum issues.

I'll try to isolate the front panel from the chassis with damper screws as soon as I'll get some.

Some tank suspension springs include a foam core inserted in to each spring to provide some dampening. Adjusting that dampening may be a good initial start, as it could suppress the high Q mechanical peaks that are intrinsic within the tank. The easiest way to do that may be to do a frequency sweep of a speaker with the tank sitting on the speaker, and using spectrum software to identify the magnitude and frequency of peaks, and then try different types of stuffing in the springs.

The same could be done for external suspension springs that you may want to use to isolate the tank(s) as a unit from an enclosure.

The link provides the mechanical equations for general application and in particular for identifying a suitable spring compliance if you are placing the tank on a compliant mat or rubber feet.
https://www.dalmura.com.au/static/Microphonics in valves.pdf
F

JohnRoberts said:
…keep in mind that reverb tanks are manufactured for specific vertical or horizontal mounting orientation. This is done to account for spring sag and mechanical clearance.

IMO, JR told you everything you need to know. The tank you showed in the video are 2bb2b1c…according to

www.tubesandmore.com
Yours are supposed to be mounted vertically with the connectors pointing up. The way they hang the springs inside is based on which direction they’ll deflect the most without banging while hanging. Make sure yours are oriented correctly and I’d imagine you’ll enjoy far better mechanical noise immunity.
Love this concept BTW, and totally understand why it’s way more fun to be able to eq on the fly withOUT a huge floppy sound messing everything up. Good luck!