I've built a 2-channel Gates STA-Level clone (Drip), and while channel 2 is operating nicely I'm having problems with channel 1. The output is clipping big time, even when the output attenuator is turned down all the way. When turned right down the low end of whatever track is playing still clips my converters, and the signal is very distorted - in effect, I'm only getting distorted low end. When bypassed the signal is good, but the meter still shows gain reduction. I've swapped tubes between the channels, and it's not a tube issue. Main board voltages are very close, although the 105VDC test point near the input transformer is measuring around 114V, and much higher when compressing. This is the case on both channels.

The second channel is much better, although I think it's still running hot as I can hear a lot of distortion at 15dB compression and higher. The meter on this channel doesn't show gain reduction when bypassed.

After tracing the audio path with a probe connected to amp so I can hear what's happening through the circuit, I've found something at the output transformer of channel 1. The inputs are good, but the seconday Low output is not giving a signal. The secondary High is giving a signal, and the centre taps (which are tied) give a signal. Because channel 2 is operating well I can compare output from the transformers, and this lack of output from secondary Low is only happening with channel 1.

I'm inclined to think it might be an issue with the secondary winding of channel 1 output transformer, because the input signal is the same in channels 1 and 2. Is this a reasonable conclusion, or could it be something further down the signal path?

Any help much appreciated.
Cheers
Stephen

I've done some resistance measurements, comparing the output transformer on each channel. They all match up except for the measurements of secondary leads to chassis. I need to go and get a new battery for my multimeter, but for the good channel this measured in the megaohms, while in the other it was around 12 ohms or less between each secondary lead and chassis.

Measurements between output tubes and primary are the same for both channels.

For all measurements, output tubes and rectifier tubes were removed. Transformers still hooked up to boards.

Here are the measurements... 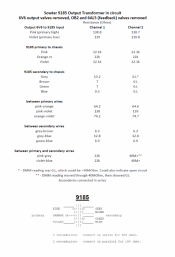 Thanks, I’m planning to do that later today.

Swapped the main boards over, and I'm happy that the issue is not with the transformer. Hard to imagine how it could be, seeing as it's brand new...
The problem channel (now channel 2) is passing signal, but meter is not working and no compression.
I guess you could call this progress... 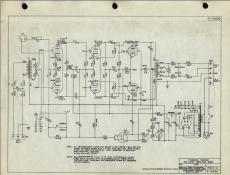