Hi,
I got this unit with two CA-127A cards for service. 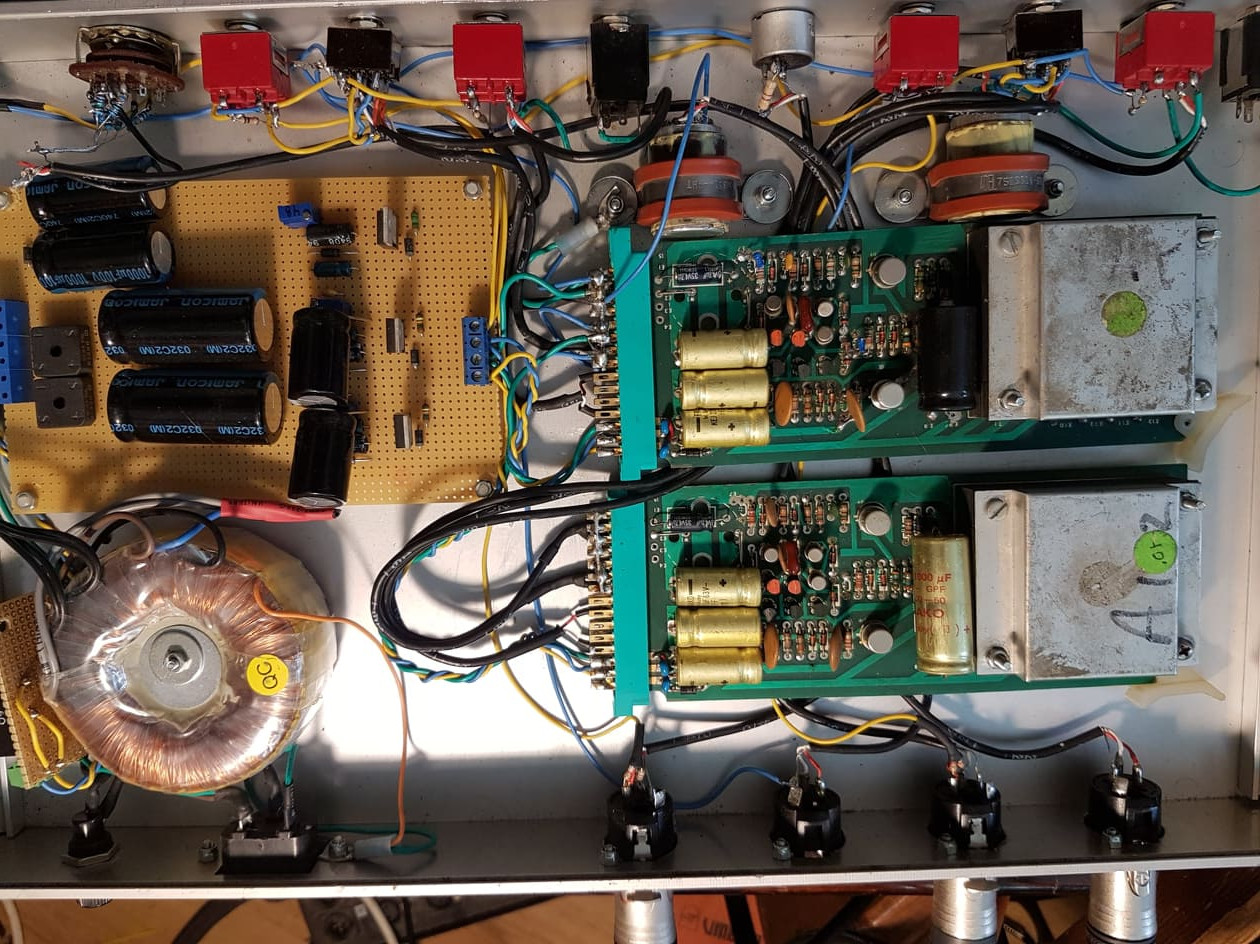 The owner complained about a non linear response of the gain pot (which I fixed by installing a stepped gain switch instead of the 10K linear pot that installed by the guy who put this unit together).

The owner also complained about low gain and bad signal to noise ratio (especially on full gain)  that make this preamp unsuitable for recording vocals and other low output acoustic instruments.
I'm intending to recap the electrolytics on both cards and on the PSU. I hope the new caps will reduce the hum and flatten the frequency response.

As far as the frequency response there's a low cut starting around  200 Hz on both cards. 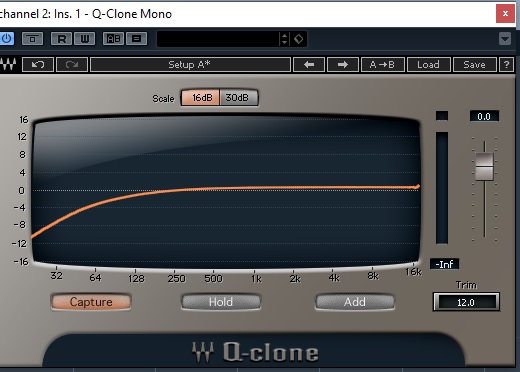 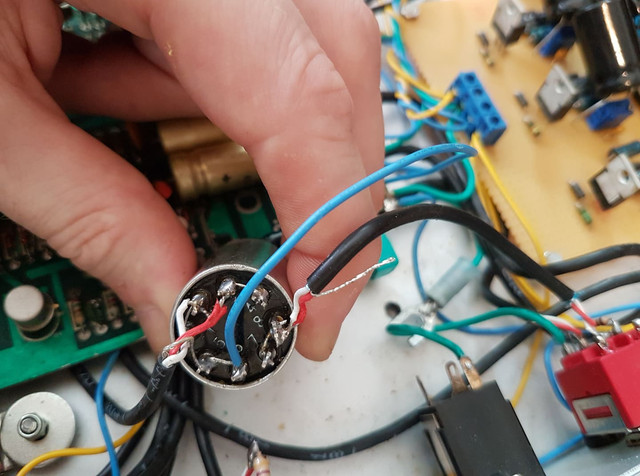 When I compared the Quad preamp maximum gain to my Amek Angela preamp I got about the same out out when the gain pot on my Angela set to 3 o'clock (on a 60db preamp).
This is the gain I should expect from this pre?

I've also noticed that on one card C5 and C6 are missing while on the other card they replaced with new 18 pF caps.
Should I install those two caps where they're missing or it's better to remove them?

From memory the gain pot should be 50k reverse log and that looks like on Ouncer transformer, not what Q8 used.
Could be factors?

I doubt power supply caps are the cause of hum, I think it's the layout.  Those caps don't look old.  The caps on the cards themselves could causing rolloff.  The input transformer is wrong, as nielsk said.  The pot is too.    The correct general schematics should be in the tech docs section.  I think I posted response charts of the QE rack-ups I did years ago.
S 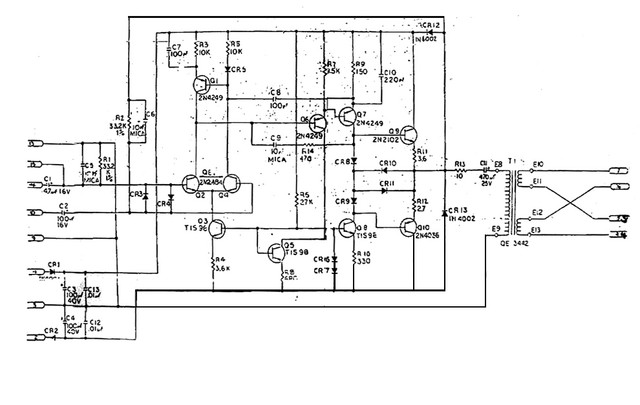 Regarding the input transformers, what is the correct model for the CA-127?
I would like to check if the transformers I have are with the same specs as the original one...
If someone here have this preamp and can check the frequency response with Q clone or any other application I'll be grateful.

There's detailed info in the Orphan Audio forums, if they're still up.
S

One more thing, for a rotary gain switch, should I use BBM or MBB type of switch?

smilan said:
Regarding the input transformers, what is the correct model for the CA-127?
Click to expand...

But isn't the lack of input transformer the only difference between it and the preamp model?  Other than maybe some pre-trim NFB value resistance, if that?

I’ll have to check. You may very well be right. Ken was definitely selling 127s as starting points for building preamps from IIRC, and there’s no reason you can’t use them that way. But his question was “what was the original/proper transformer” for those cards, and the answer is there were none.

I’m struggling to find reference to the 127A beyond the schematic the OP posted though. That’s one I’m not familiar with.

I have a schematic for the 227 which has the same diff pair on the input, but without the current source/sink. That one uses a 150/600:50k input transformer. With the current source/sink transistors, the optimal input impedance should be lower, should it not be? Without doing any math, I’d guesstimate you could do fine with a 1:10.

From the Orphan forum I have:

The CA-Series cards were designed as utility amp cards for building custom recording and mix desks, in single or dual channel versions and with options that changed the card designation. The CA-Series were first released in the early 70's and updated over the years with better opamp designs as the model numbers changed.
The CA-127, 127a and 137 were principally used as Line-Amp output or bus amps, but have a built-in location for a QEE-3440 or 3440a mic transformer, thus converting any of these cards to a CA-227 (along with some circuit changes). Check the initial posting photo to see the dedicated transformer mounting position near the edge connector, that is partially covered by capacitors not required for preamp function.

The fully implemented version (QEE MP-227) became our flagship preamp in the early 90's when we started pairing them with restored vintage eq modules in our 1ru rackmount "Classic Channel Strip" series, which are still in limited production.

I have seen quite a few CA cards paired with Ouncers and other small frame transformers in an attempt to create a preamp, often with results similar to the original posters complaints (Low gain, LF rolloff, Hi-THD, poor level handling with condenser and modern active microphones).
Nothing against Ouncer series transformers as they absolutely have their place in the pro-audio world that cannot be challenged, but compared to the tone and level handling provided by a 3440a mic input transformer installed on-card, the sonic difference is astounding.
Note that a few very specific circuit changes must be done to change any single channel CA-Series Line-Amp card to a preamp, beyond installing the right mic input transformer.
The QEE CA-227 card provides as much as 68 to72 db of gain (depending on impedance of mic selected and input transformer strapping) with flat response from below 9hz to well over 70khz. Along with the array of tonal variations from at least four input impedance selections, the harmonic contribution of the huge custom wound grain-oriented silicon steel output transformer has been pivotal in countless recordings and is still a first call preamp for many engineers to this day.

We still offer DIY mic preamp kits for QEE, Electrodyne, Sphere (and many others) on special order, and continue to stock mic input transformers for experienced builders who are fortunate enough to have some of our vintage CA-cards in hand.

Please feel free to contact me through the QEE or Orphan Audio contact pages for kit details or parts to complete any build using our vintage Quad-Eight or Electrodyne parts.


"Education is the cure for everything"

Hey Ken, good to see you here. Thanks for the details on the CA cards! Do the kits come with the steel output transformers you mention, or are those user-sourced? I assume they’re 1:1 (600:600)?

While you’re here, I’ll give you a nudge on the Altec 9475 transformer data (or anything else from your conversations w/John Hall about that unit) we emailed about w/David Geren a few weeks ago.

Hope you’re all settled in to the new digs.

smilan said:
* I don't think that the low cut comes from the input transformer
Click to expand...

pins 7 and 8 of the input transformer connected to the card's input (pin 14).
Click to expand...

I can't read the posted schemo clearly. Is it the pin that goes directly to the base of Q2?

These figures seem pretty low. It suggests quite a low inductance, resulting in restricted LF response.


When I compared the Quad preamp maximum gain to my Amek Angela preamp I got about the same out out when the gain pot on my Angela set to 3 o'clock (on a 60db preamp).
This is the gain I should expect from this pre?
Click to expand...

The circuit's gain is determined by the  ratio of the 33.2k resistor in the NFB loop and the resistance at the foot that depends on the gain pot. And there is the voltage gain of teh xfmr, which is unknown. Could you measure it?

I've also noticed that on one card C5 and C6 are missing while on the other card they replaced with new 18 pF caps.
Should I install those two caps where they're missing or it's better to remove them?
Click to expand...

These caps are needed for stability. the actual value must be determined by experimentation.

those ouncers were like 3 bucks a piece back in the day, the problem is you get a core worth 29 cents, so those transformers suck signal.
and the coils can be a bit sloppy, so you end up with a transformer that has  "character",    the trick is finding a way to take advantage of this "character."

the quad 8 output is very similar to the API quad wound output, only it is done on a "flatpack" core that fits in a 1 u rack a lot easier than the API core.

the best thing to do with those cards is find the sweet spot as far as gain is concerned, then fix the gain with a resistor and control level by mic placement.  the sweet spot will be the best balance point between noise and tone. if you use a pot for the gain, you can limit it's range by putting a resistor in series with it and dropping the pot value to cover the window you want.

As far as bad freq responce.... :-\
I have rebuilt literally dozens and dozens
of AM10s and AM12s for a buddy of mine who is restoring a beautiful
Coronado.  I have found many of the Rs in these have severally drifted in value.
This has caused all kinds of freq responce problems when checking
them with sweeps.  Your skitz is almost a cross between an AM10/AM12.
I would put a meter across the Rs.  You can do this in the circuit in most
cases as went these old Rs drift they drift hi to very high.  I have seen as hi a 2x s
what they should be.

subjectively Ouncers are shy in the low end but they don't roll off dramatically.
looked up some test results of a pair of custom tube units with O-1's;
20 Hz was down 0.7 dB re 1000 Hz  into a very flat response preamp.

probably not the issue, but not liking the series resistor into the output transformer primary.
A

subjectively Ouncers are shy in the low end but they don't roll off dramatically.
looked up some test results of a pair of custom tube units with O-1's;
20 Hz was down 0.7 dB re 1000 Hz  into a very flat response preamp.

probably not the issue, but not liking the series resistor into the output transformer primary.
Click to expand...

At the risk of repeating myself, the graphs clearly show the input xfmr as the culprit.
But not only.
The source impedance in these measurements is a dominant factor.
What is the test set-up?