I got my hands on one of these, so here's the initial report, thoughts, ideas.

Good news is the schematic seems to be the same as the original NT1a with some slight changes. Diferent in/out pin order of the 40106, 100nF output caps. The zener is 13.6V. Polarization voltage is about 70V. I am not sure about the FET, it says just 450 on it, but NJ450L stated in schemo is a technlology, there is no fet by that name, but several FETs produced using that technology.

It is really dead quiet, but i was thinking if i could take it to extremes, however i am not sure how far i can push the 40106. Fairchild states their absolute maximum Vdd 20VDC. This one from NXP has only recommended 15VDC, but not absolute maximum. I guess 18V zener would do fine, but i am tempted to try 20v.

I have tested the capsule at 80V polarization voltage, and it works just fine.

I have measured the response both with, and without the grille. It has really minimal effect on the response. The dip in the high end on the graph between 8k and 9k is due to headbasket, so i wonder what was the deal with all those headbasket mods, seem to be pointless. I will experiment more with custom grilles. There are no acoustic pockets, nothing gets in the way of the capsule, and the design is probably better than most headbaskets out there.

The graph i posted is without any smoothing, and take 180 response with grain of salt as i don't have true anechoic chamber

The body deceivingly seems to be of lower quality compared to the original, but only at first until you take the acoustics into the equation. A lot of the construction is made out of plastic, and body sleeve is thin metal that resembles BM800 tube material, which is a good thing. Both actually resemble u87 tube, which is thinner and weaker than many believe. All of this means there is no resonances traveling through the body, the sleeve is additionally damped by foam glued to the vertical profiles of the chassis. The body simply doesn't ring or resonate at all.

There is an issue though, and it is the ''improved'' capsule Rycote style holder. When you hold the mic in hand the whole thing works as a 30hz oscillator. It generates terrible low end rumble, so i plan to mod the holder.

The dome under the capsule is of great shape, i might just stick tiny amount of some absorbent material, and see if that changes anything.
Frequency response with grille (stock) NO SMOOTHING: 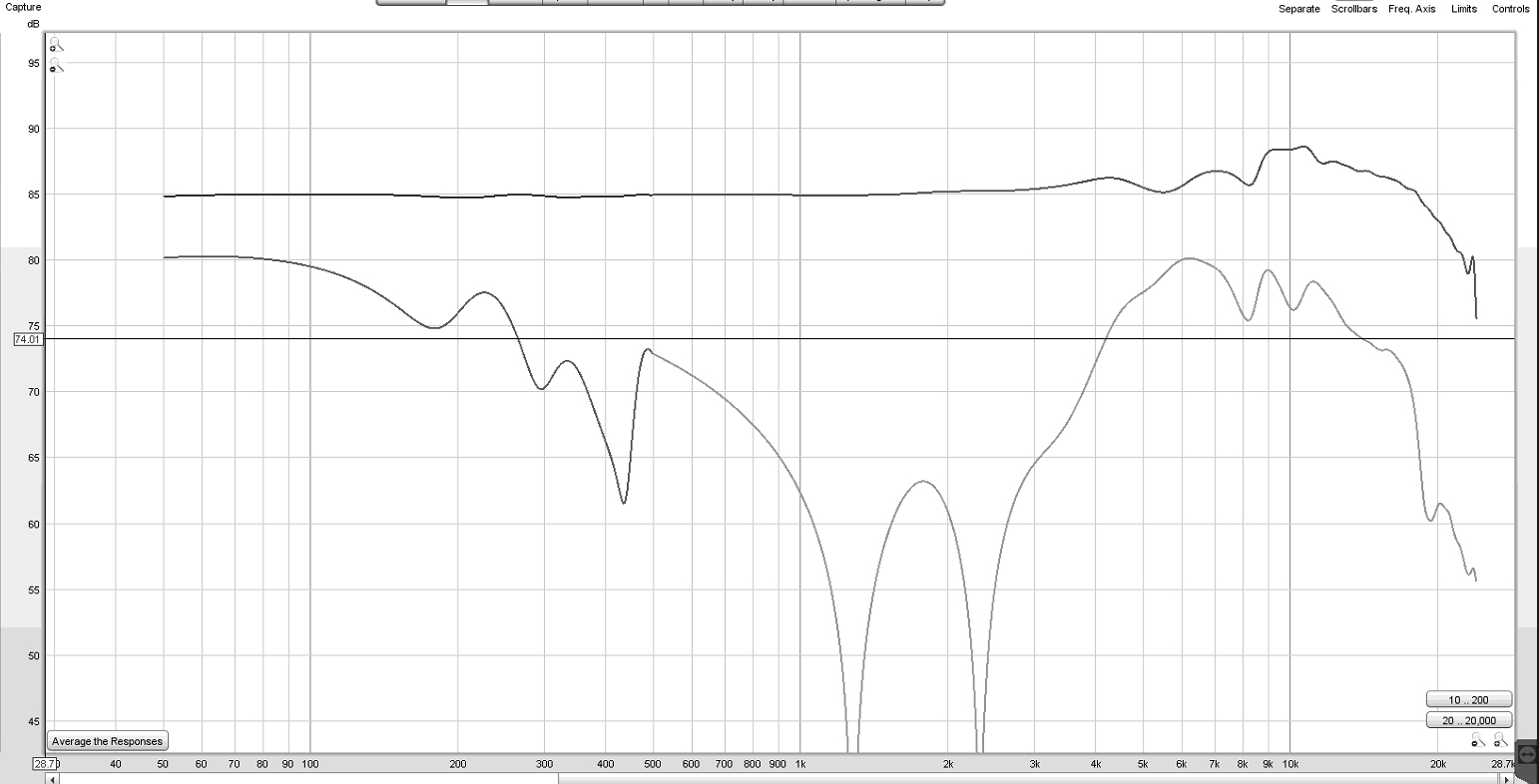 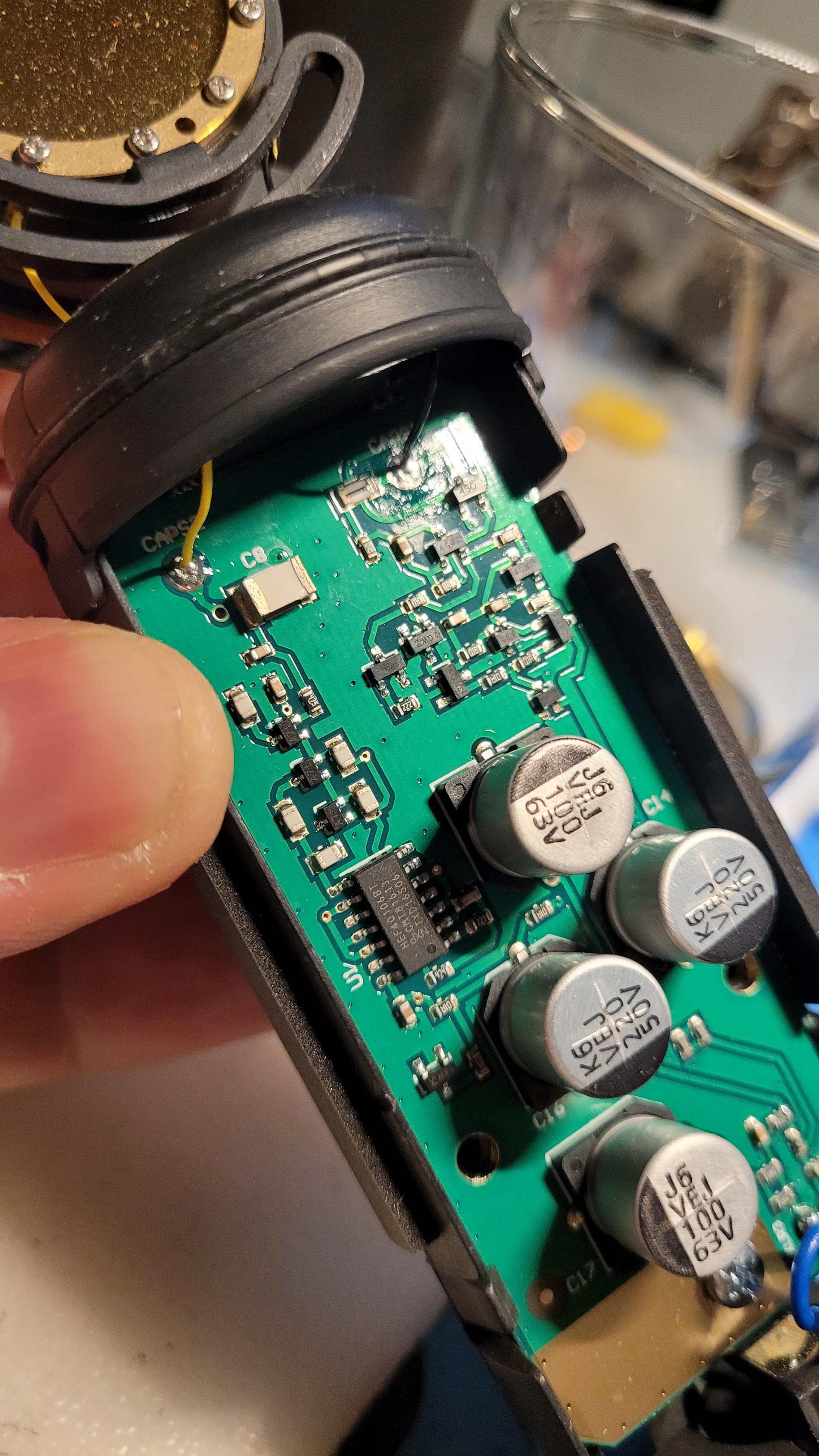 Here's a circuit mod i came up with. I had a 22mH inductor so i worked around that one. This gives the mic flat-ish response. Reminds somewhat of u67 response. Some trace cutting necessary, smd tinkering, so not very DIY friendly. 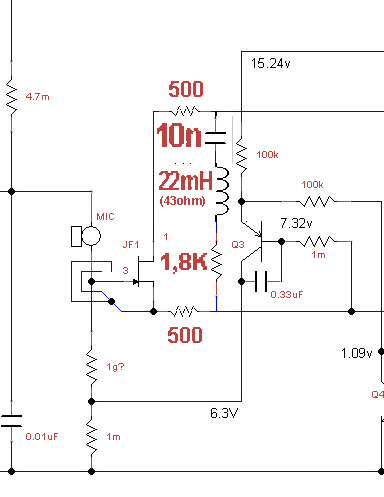 Here's before and after, and filter response curve on the top.

The JFET may well be an Interfet IF4500:

I'm surprised by the "different pinout" on the 40106 - are you sure it's not just that the gates are connected differently in the circuit (as opposed to internally, within the chip)?

I doubt you could get smoke out of phantom power, but... :
K

Sorry, i'll update that. It's just they rearranged ins and outs, pinout of the chip is the same.

Update:
Has to be if4500, Doug Ford of Røde actually recommended it to me:
"I have had good success with Interfet fets; For example - the IF4500 has extremely low noise, moderate capacitance and low gate leakage current."

As i understood his lecture on this topology, input capacitance doesn't even matter because of the negative feedback.
D

The optimum polarization voltage for this capsule is 70V.
See the graphs NT1-A (70V) and NT1 (60V).
The same capsule, the same amplifier, only a different design of the capsule holder changes the frequency response at high frequencies. 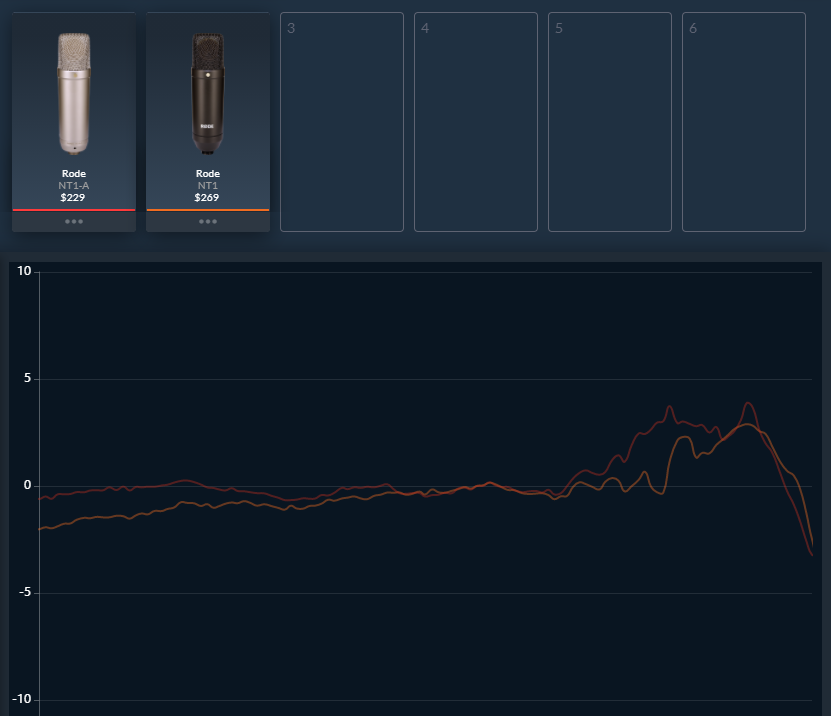 I'm still trying to figure out why Rode chose to parallel some of the inverters on the 40106?..

I used a simpler - but more variable application - based on Rory Holmes' 1983 ETI article on CMOS multipliers ( a copy of which gyraf has posted here: http://gyraf.dk/schematics/Voltage_multipliers_with_CMOS_gates.pdf )

I used that for my LDCX2 project ( http://www.jp137.com/lts/LDCX2.notes.pdf ) and was able to supply 60V to the capsule, even with just a 9V supply to the 40106.  It should be possible to get significantly higher voltages - or required - from a higher DC supply to the IC....

I also found that the simplest way to derive interim lower voltage outputs - when testing for example - was to just not fit one (or more) multiplier capacitors -- starting with C8 and working backwards...

As I recall, the 'generic' absolute max DC supply voltage for 4000 series CMOS was 18V. ... (with 3V as a minimum) Not sure if that applied to all manufacturers though?
D

rogs said:
I'm still trying to figure out why Rode chose to parallel some of the inverters on the 40106?..
Click to expand...

Why would you need a second inverter to act as a current buffer in this application?


rogs said:
Why would you need a second inverter to act as a current buffer in this application?
Click to expand...

And also to unload the generator by current for sharper pulse fronts.
R

I have found a single 40106 inverter perfectly adequate to charge a 10nF capacitor, using an oscillator frequency of c.125KHz.

'scope screen shot of sample output (all outputs look the same) suggests adequate source current available from each inverter for this task? (It's not exactly a very demanding load!) 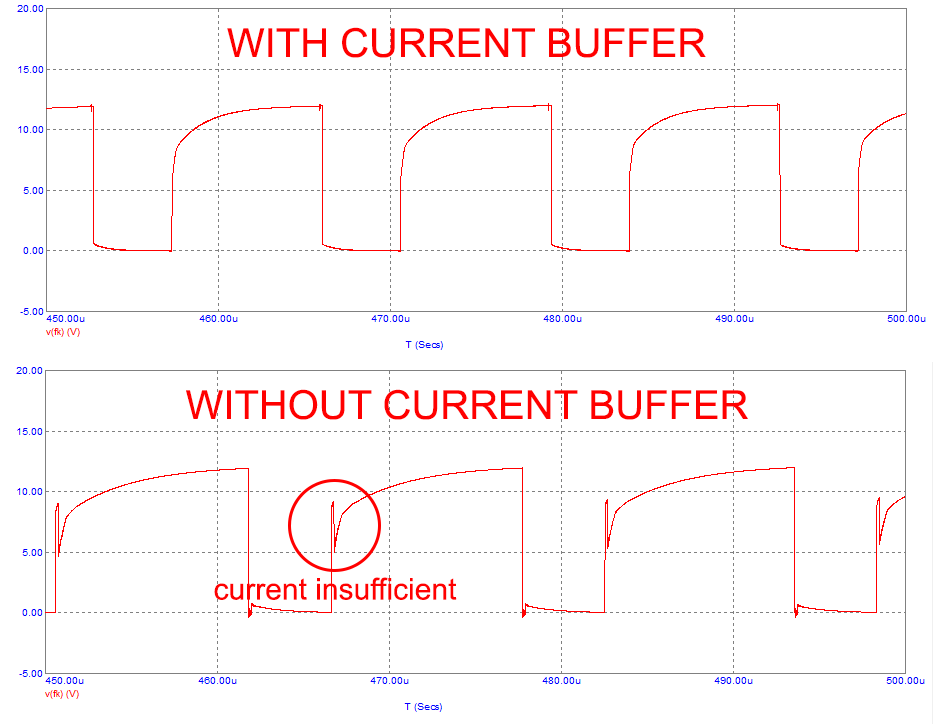 As you can see from my 'scope screen shot, I'm having no such problems. (Each 4000 series B type output is buffered internally as part of the series spec of course). The device I'm measuring is a CD40106BE.

The main advantage of using all the 40106 inverters sequentially is that it is possible to obtain a DC output up to around 100V from a single device, using a (comfortably within spec) 15V DC supply .

You do need to remember to ensure the multiplier caps have a sufficient DC ratings of course .. especially the latter few stages!
D

rogs said:
As you can see from my 'scope screen shot, I'm having no such problems.
Click to expand...

Of course, you have a completely different circuit. This topic is about RODE NT1.
K

dima_k85 said:
The optimum polarization voltage for this capsule is 70V.
See the graphs NT1-A (70V) and NT1 (60V).
The same capsule, the same amplifier, only a different design of the capsule holder changes the frequency response at high frequencies.

The capsule is not the same, the new one is produced by their latest equipment, has different construction and therefore different response.

I have measured many different capsules with different pol. voltages and they measure the same until the point of collapsing. That part is just a myth. I will post before/after graphs when i'm done.

How do you think they achieved better snr if they kept everything the same, yet lowered polarization voltage?

dima_k85 said:
Of course, you have a completely different circuit. This topic is about RODE NT1.
Click to expand...

My comment is about why Rode chose to use parallel inverters, when it clearly isn't required for a 'standard'  40106 multiplier circuit.
Quite why Rode have chosen a more complex design that does appear - from your comments - to require parallel inverters, only they will know?
I'm still trying to work out why they used 2 inverters on the oscillator. That style of oscillotor is more appropriate for a non Schmitt triggered inverter.
Where there is a Schmitt trigger on the inverter inputs - as with the 40106 - there is no need to use the second inverter for the oscillator.  That would release an extra invertor for use as an additional multiplier, if required.
Rode have certainly taken some design decisions that require their circuit to be more complex than is strictly necessary.
I'm sure they'll have had their reasons for doing that...

Certainly the simpler version provides perfectly adequate results, with only some 3mV p-p of 125KHz 'ripple' observed on a 60V output in the circuit I used.
K

Here's the promised measurement, 100v is as you can see identical in response, 2.5-3db louder, even quieter. Seems to work like a charm

kingkorg said:
The capsule is not the same, the new one is produced by their latest equipment, has different construction and therefore different response.
Click to expand...

The new NT1, NT1-A and Broadcaster microphones all have identical capsules.

How do you think they achieved better snr if they kept everything the same, yet lowered polarization voltage?
Click to expand...


kingkorg said:
Update:
I used 4x4.7v zeners, i get about 100v pol. voltage. The capsule takes it no problem!
Click to expand...

No problem with low humidity, start using it when recording voice and problems may appear.
The membrane may be electrically breakdowned.
R

dima_k85 said:
The new NT1, NT1-A and Broadcaster microphones all have identical capsules.
Click to expand...

Not according the Rode themselves....

The HF6 capsule was developed especially for the new (black) NT1, which was released some time after the NT1-A.