U87 in BM800 microphone donor body

I started DIY three years ago right before all the lock down action started and as it provided quite some nice distraction I had quite some projects going. In the dropbox link below you can find my attempt on transferring a U87 based layout to the BM-800 donor body.
The donor body is particularly cheap and does the job well in my opinion.

In the link below you can find the BOM, a detailed building guide and some sound samples recording OH and some vocals with the mic. The sound samples are unprocessed unless otherwise stated (the vocals are also presented once with EQ). Both instruments were recorded by the U87-based clone in the BM800 body, with the Dachmann K87 capsule.

Here is the link:

U87 in BM800 microphone donor body 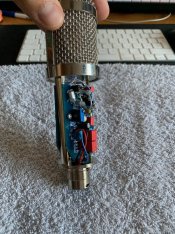 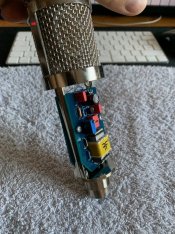 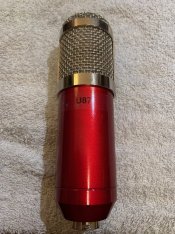 I had to split the curcuit part into two because of the limited space. I used a Dachmann K87 with non-isolated backplates and a MAIKU K87 capsule with isolated backplates (both worked fine), a 3u audio GZT-87 transformer (ratio 9.5 : 1) and a 3D printed capsule holder. Most parts were obtained from mouser, the styroflex capacitors were purchased from reichelt.at and budgetronics (for details see the BOM in the dropbox folder).

Last but not least the project has been highly influenced and some solutions were simply copied from members of this forum (e.g. matador, khron, poctop, chunger, and others) - thanks for all of their posts, ideas and solutions that they have shared over the times. The FET biasing has been adopted from Mic&Mod as well as the additional connector for a sine wave to adjust the bias via a tone generator.

As there has been already a discussion about the BM-800 donor body maybe the sound samples prove helpful to some forum members.

Thanks again for all the nice hours I spent browsing through this forum,
all the best
mike

In case anybody is interested, I put the remaining PCBs on the black market.

here is the link:

PCBs for U87 in BM800 microphone donor body

Hi! As stated in the building threat, I still have some PCBs left from the order. If someone's interested, they are 17.5 € / PCB + shipping costs to your country (I'm based in AUT (EU), so within AUT it's roughly 5 €, EU it's roughly 10 €). If you find better offers for shipping let me know...

I'm also open to exchanging them against other projects you may have elaborated - just drop me a note if you're interested.

As one of the new members pointed out, I forgot to describe the switches [polar pattern (Card., Fig. 8, Omni), PAD and Low Cut function]. These can be simply jumpered on the board. Additionally one can use the pins for jumpering to wire the PCB to a real sitch by a connector (I never tried that myself). More details can be found in the new Building Guide in the dropbox folder (Version 1_1).

Apologies as I forgot to include it right away.

PCBs for U87 in BM800 microphone donor body