I'm working on restoring an ancient Wilcox tube compressor which was a part of a telecommunications console and was originally designed to limit a mic level input for transmission to telephone lines. I managed to track down an Army manual that has a schematic, layout and other technical info.

The actual circuit & tube complement differs from the schematic. Judging by the condition of the wiring it doesn't look to be user modified, I suspect the circuit was revised at some point and that the revisions aren't reflected in the technical docs I have. 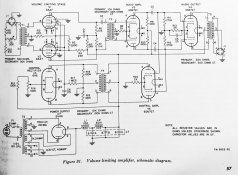 And my redrawn version- 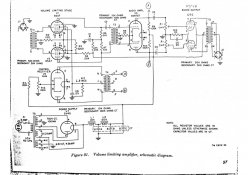 In the original schematic the output stage was a 6SN7 but mine seems to be wired up for a pair of 6V6's (there is a metal label on the chassis with the tube lineup printed on it and 6V6 is scratched into the surface corresponding to those 2 sockets).

I was surprised to find a dual 500k pot wired into the grids of the 6V6 output tubes. It seems R16 sets some control over the threshold of compression. I've never seen a tube compressor with 6SA7 tubes in the input stage.

Before firing it up I have some work to do in replacing the power filter capacitors, replacing the old connectors with XLR & attaching a proper power cord to it. I'll also need to track down some 6SA7's. The old cloth wiring is very brittle and cracks apart if I'm not extremely gentle with it.

Curious if anyone has worked with one of these before and any thoughts about the circuit?
Last edited: Jun 23, 2021

Never seen or heard of one before, but looks like it has the potential to be a nice limiter. Should be reasonably fast too.

Wow, that's an odd hack, I would expect to see 6V6's used to get a higher ratio, yet they've tossed a gain stage to the side chain rectifier to get another socket free.  A pot on a power tube grid is problematic too.  2K cathode on a pair of 6V6's.....I could go on.

Picture of the unit in question?
H

That's my bad, I forgot to redraw the value there.  The resistor color codes are worn but on mine I think R13 is 750 ohm

I'll post some pics soon. Its partially disassembled at the moment

I like that C2 is used to keep DC current away from T2 primary. 10k primary being fed from a very high source impedance doesn't look great and speech limiter might not have transformers with great frequency response to begin with.

The original schematic has very slow attack time. In the modified version attack has been made faster.

Before spending too much time and money I would probably check if the unit has decent enough frequency response for modern use.

Pics I have of one of these have a date of manufacture of 5/44. Mix of transformer types, some nice Thordarsons on there.
The 1st version 57-D from the late 1930's was advertised as a compressor for radio stations.  I've found most things of that era pass pretty modern sounding audio, in regards to bandwidth.
A

I believe it's the opposite. According to datasheet, pin 5 is the remote cut-off grid and pin 8 the sharp cut-off. Which makes sense. Anyway, the paucity of information regarding the construction of 6SA7 makes it subject to conjecture...

That is an odd hack.  Seems you'd want to take the output off the 6V6 plates with a blocking cap to get the faster attack times.  You wouldn't need the xtra gain stage in the side chain if done that way.

I'd be weary of that OT being able to take a pair of 6V6s without distorting.  Probably why they put the dual 500K pots there.  You can just rebuild it as a permanent voltage divider with fixed resistor values set for keeping output at a proper level.  Make sure the PT will take the xtra current draw if you rebias.

All this said without consideration of what happens upstream.  Maybe they just wanted higher headroom or more driving power in the output stage.
H

It seems that the unit I have might actually pre-date the schematic/manual I've been referencing.  Pot code on the dual 500k suggests 7th week of 1946 and the manual is dated 1952.

Both potentiometers are slotted type and mounted on the back of the chassis (i.e. set and forget).

I was tempted to do what lassoharp suggests and wire a fixed setting in place of the output pot and put a level control before the feed to the sidechain.  Level / threshold would then be interactive
H

Also, I found an eBay listing for a similar unit sold a few years back

This one is Wilcox model 57DE, looks the same as mine excepting the tube complement and the silver spray paint

That's a funny repaint, from the era when rust killed sales.  It doesn't anymore.

I've never had one, saw several in person side by side once.  I remember missing one on ebay for $1 once.....

Interesting, Emrr, the one you posted looks like it has 4 pots.  I see one in between the 6H6 & 6SN7 as well as the one by the i/o connectors that mine doesn't have.
H 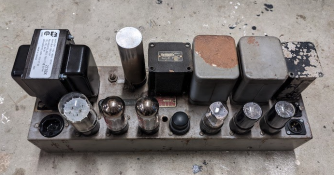 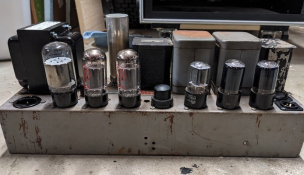 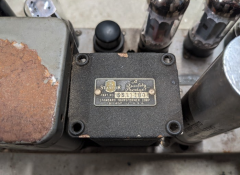 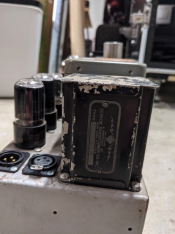 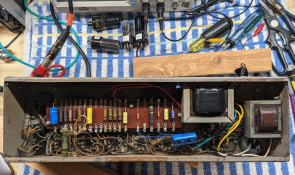 I've had some time to work on this.

The power transformer had a short and I replaced it with a Hammond 273BX - running on the 125V taps.

I also swapped out the electrolytic and mica caps and I replaced the dual 500k pot with 470K grid leak resistors. I'm using a pair of Shallco 600:600 variable T pads on the input & output.

R16 (100K pot) adjusts the threshold of limiting - it seems like the ratio also increases as I lower the threshold?

I was hoping someone could give me some tips for adding a db reduction meter. I have a spare 1ma meter that I could use but I'm not sure where to wire it in. I don't have much of a grasp on how the 6SA7 tubes work.


lassoharp said:
That is an odd hack. Seems you'd want to take the output off the 6V6 plates with a blocking cap to get the faster attack times. You wouldn't need the xtra gain stage in the side chain if done that way.
Click to expand...

So far I've just been working with test signals but I might experiment with this after I get a little further and have a chance to run some program material through it.
Last edited: Jun 23, 2021
H

The typical place for a meter is in series with R2.  Look at all the other tube limiters in tech docs.  It may or may not need a parallel resistor to set the range.
H

I've got the 1ma meter in series with R2 to ground and a 5k resistor strapped across the meter in parallel.  The 5k meter is helping to zero it but the scale is narrow.  I'm measuring something like 20db gain reduction and the meter isn't moving all that much.

EmRR said:
The typical place for a meter is in series with R2.
Click to expand...

The problem there is that R4 & R3 inject much more current (about 10mA) than the actual cathode current, which results in teh obervation that the needle hardly moves.
A

hereforever said:
I thought maybe I'd try wiring in a meter and resistor in parallel at the junction of R5/R7 & R6
Click to expand...

That would certainly provide a more sensible indication.

U
Shure M67; Restoring and Ideas