Yesterday I got a visit from a friend who is clearing his attic, he's an orchestral player and composer and once experimented with making electronic music the way it was done in the early days.

So, I got a ton of stuff and 3 boxes of old parts.

He told me to take it apart for parts as several "old guys who know tube stuff" have taken an attempt to make this work again without succes.
I don't think I can fix this, though I would love to see it working, also, there's some pretty lethal voltages going on in this thing, I don't feel comfortable working on this.

I don't have a variac, I have not powered it up, the story goes that it is "working" but it only shows a dot on the CRT.

But before doing anything to it I'd like to show what I've got and,... who knows... 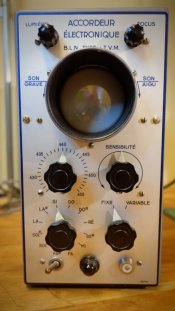 It's a tuning device... for instrument builders ?
I have not got a clue on how this thing operates, it came with a mic that is not functioning anymore but I was told it has once worked with a tonegen at the input. 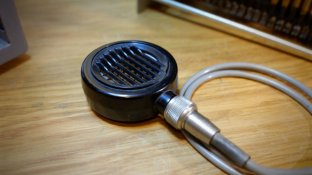 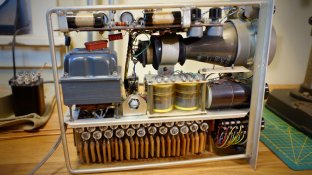 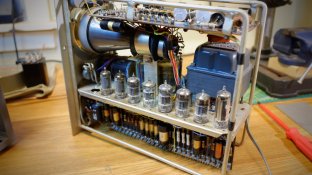 So yeah, I love the construction of this thing, and parting it out and use the frame for some tube mic pre build is defenitely an option for me.

So I wonder, what do you guys think ?
Z

For sure look like a tuner.
Which probably compare incoming signal (from mic) with built in oscillator.
we can see 24 trimer which are probably variable capacitor coupled with mica caps, for precision oscilator tuning ?
front panel in french offer frequency tuning, sensibility (for the mic pre ?), a note selection as fixed or variable tuning.
Scope seem to offer brightness an focus of the trace.
The scope probably compare the two sources and offer kind of lissajous visual form ?

Regarding component useed it's a late 40' or 50' built
Beside the absolute pristin inside, for sure all those tar capacitor have to leave... as probably other part

I think if I have this in hand I'll try to resore it as is, and maybe mod it to output the oscilator and find a way to modulate it as sound generator, as to see how the inside mic pre can be used (without bulding other thing with the frame) !!
Right now I'm biased, I'm in the middle of a 50' french tube syth restoration (which share the same main trafo !?!)

From what I understand the display shows a perfect circle when in tune, and a elips either tilted to the right or left when not in tune.

I rather not take it apart, I'd rather see it functioning again, if no one would have shown any interest in this thing it would probably be taken apart at some time by me.

I'm willing to part with it, as I don't have the skills to repair this, so I think you should have this.
Z

PermO said:
so I think you should have this.
Click to expand...

If it shows a dot but no deflection with signal input, maybe it's an input stage problem?

In any event, that is super cool and if you want to sell, I'm willing to buy it.
Z

Here is the same lookin trafo, this is the PSU/powerAmp unit of the Sythetizer I'm resoring.
Probably not the same secondary...
The brand is Vedovelli 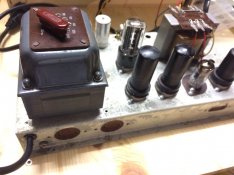 Yup, that transformer is defenitely from the same manufacturer.
A

PermO said:
From what I understand the display shows a perfect circle when in tune, and a elips either tilted to the right or left when not in tune.
Click to expand...

I don't think so.
It shows a stable straight-ish line when in tune, and the line rotates when it's not in tune. If wildly out-of-tune, the image may vary from a straight line to a circle.
Z

abbey road d enfer said:
It shows a stable straight-ish line when in tune, and the line rotates when it's not in tune
Click to expand...

so it's not an XY lisajous ?
somthing like signal A -->X and Signal A minus signall B -->Y ?
Best
Zam
Click to expand...

The most basic Lissajous has the reference going to X and the unknown signal going to Y.
Of course you may imagine any combination of these signals, and get different displays.
Indeed by feeding summ and difference signals you rotae the display by 45°.

Well,... it's on it's way to France, so Zam can continue the topic
Z

PermO said:
Well,... it's on it's way to France, so Zam can continue the topic
Click to expand...

I wanted to publicly thank you !!!
What a smooth and classy share
Best
Zam

My fiend who gave me this unit just send me a picture; 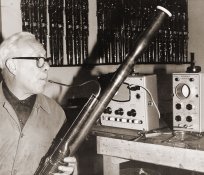 Woodwind instrument builder Josef Püchner was using this tuner.
My friend plays bassoon and he saw this picture at his luthier's place, he will be following this topic with interest.
Z

The tube tuner is here
Very nice tool ! and the look is so "vintage"
I'll probably try to restore it as soon as I finish the current restoration (same area tube syth)
Then I'll see what mods (non destructive) can be done.
Like output for the mic pre and oscillator, or "keyboard" to play the oscillator

I'll have fun for sure

The trim capacitor array is crazy
Someone know what brand and technologies this is ? ceramic ? 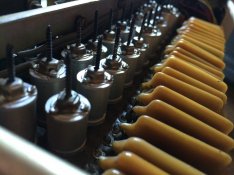 zamproject said:
The trim capacitor array is crazy
Someone know what brand and technologies this is ? ceramic ?
Click to expand...

These are air capacitors. The electrodes are concentric. Capacitance is adjusted by controlling how deep one is plunged in the other.
Z

abbey road d enfer said:
These are air capacitors. The electrodes are concentric. Capacitance is adjusted by controlling how deep one is plunged in the other.
Click to expand...

yes, I find out in the mean time you reply
I unscrew one totally and as you say, concentric tubes that overlap more or less

There is 24 of them and only one octave selection, the rotary switch have two deck, so probably there is two oscilators (for better precision ?), or the tube osc network need 2 trimer per notes, I'll se later wile drawing a schemo.
You must log in or register to reply here.

Output capacitors, is there better than Electrolytic?