All the schemos I have for fixed-bias AC100 have no screen grid resistors. They all show HT from the pi filter going direct to the screens.
So I wonder what other differences there may be...

I must be blind. Can you circle them for me?

The phase inverter is fed from R17, the screen grids are not fed from that point but just before.
I read your last post as; "So I wonder what other differences there may be...", hence the original schematic I posted.
A

Jon S said:
The phase inverter is fed from R17, the screen grids are not fed from that point but just before.
Click to expand...

I'm not questioning that. I don't see any 470 r coming from the second cap of the HT filter to the screens. I see a direct connection.

Jon S said:
I read your last post as; "So I wonder what other differences there may be...", hence the original schematic I posted.
Click to expand...

I'm familiar with this schemo.
My comment was triggered by the fact someone mentioned 470 ohm resistors feeding screens, which is not on any schemo. So maybe there are other differences between the schemo and the actual build. Don't know, trying to find an explanation why you build does not work as expected.
T

All the schematics relating to the AC100 are here , only the earliest version had the screen droppers

The history of the Vox AC100, 1963-1970. Pictures of surviving amps, from the Vox AC80/100 to the final iteration of the AC100 Mk 2; schematics; material on components, suppliers and manufacture. Images of bands using the amp on stage and in the studio 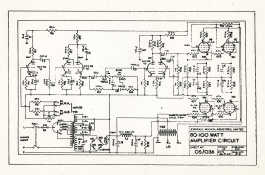 Seems like a Brimistor was used to limit screen current in the later version , they had a habbit of blowing up so often they have been replaced with resistors .
Theres tons of photos of the various versions of the AC100 on the site I listed as well as detailed documents from the Thomas organ co on the changes .
M

Ah, the joy of 60's British electronics.
This may be redundant but
1 - Tubes ain't what they used to be. VOX designed their amps right to the max and most modern output tubes will wilt under the voltage/current. Most US households also run 120 VAC and not the 115 VAC these were designed around. Several manufacturers make heavy-duty EL34's that will handle the load.
Just remember - VOX amps "eat" output tubes
2 - The transformers used in British amps were not as rugged as the ones in US amps. I've never had a Fender catch fire but I've had a Marshall 100 do just that when the Output Transformer melted. The systemic heat in VOX amps broke down the insulation. So....
3 - Get an aftermarket 100 Watt EL34 output transformer that will handle 100 watts without running on the bleeding edge. There appears to be a new(?) company - US Classics - which is picking up where Classictone closed shop. (Very coincidentally the US Classics are made in Chicago with paper bobbins just like Classictone - but priced higher)
You might want to add a PC internal fan to pull the heat out.
4 - VOX usually has almost as many versions as actual production numbers - most without documentation. You've also discovered that just because it fits, a 12AX7 doesn't always work for a 12AU7. Not every guitar amp owner can read a schematic or tube list. "What do you mean it uses different tubes than my Fender?" The fact you could read the schematic and ascertain that maybe there was an issue with the PI tube put you way ahead of the game.
The AC-100 was VOX's response to the "arms race" for more powerful amplifiers. Like the mutant Fender 180's I wonder if VOX just pushed it a little too hard. It seems to me the esthetics of the head were more important than reducing the internal heat. I don't think enough engineering went in to doubling the output of the AC-50
Every VOX I've worked on was "ridden hard and put away wet." It often was more like restoring a vintage car than repairing an amp.
Hope your repairs last