Gus, how did you figure out the tip29 thing, to220 is a big case to be using for an overdrive. I gotta give that a shot, have to splice leads to get it into the socket,

Cool on the Brian may thing. I wonder what transistor he used

Just built the Cornish ST2, probably the best thing I have heard from all this Aion stuff, like a tube screamer only no mushy rolloff and no artifacts. You can hear every note on a fast run, not all blurred together like the screamer, nice clean and transparent sustain and the tone knobs are are perfect,

Something you could keep on all the time as part of your overall sound. 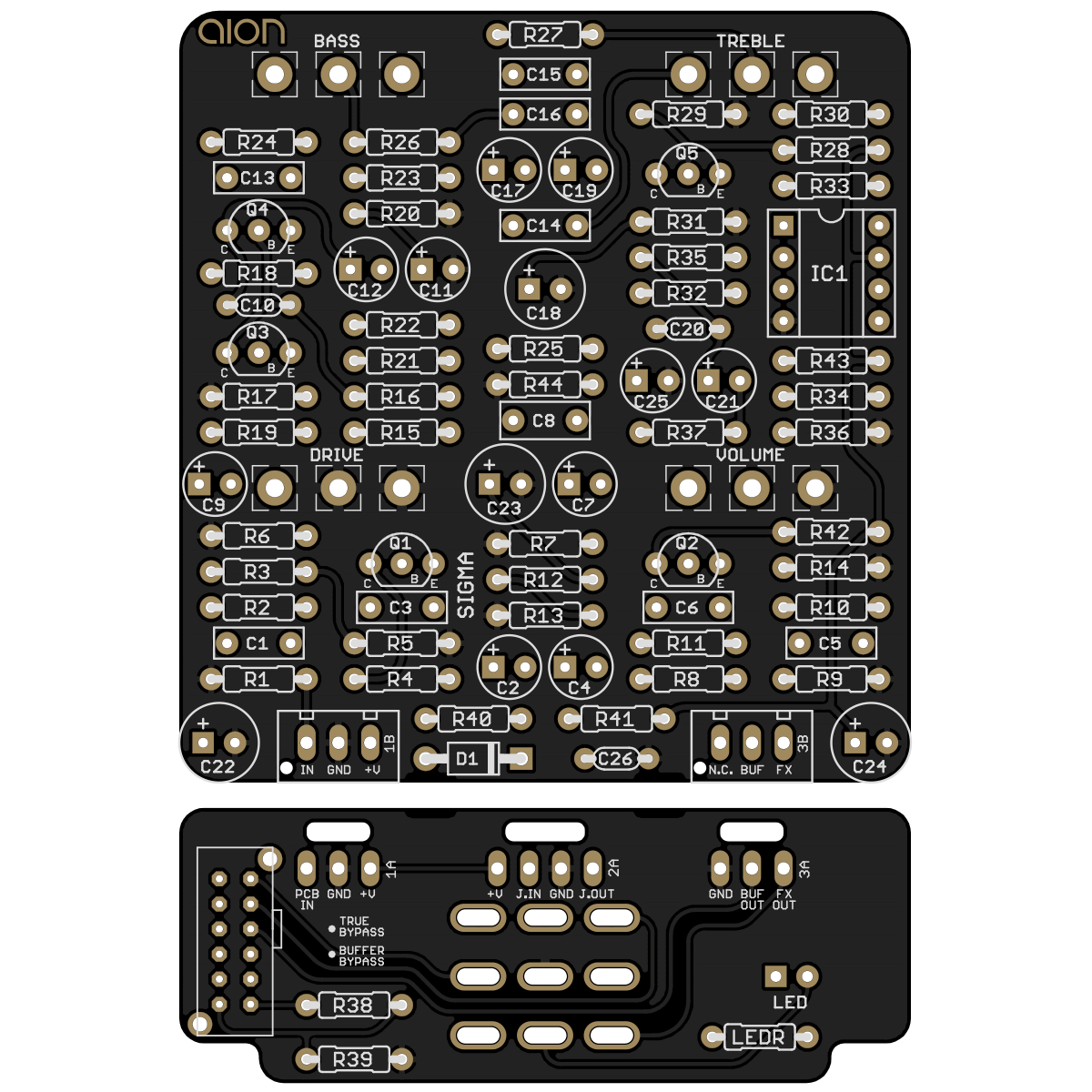 An adaptation of the Cornish ST-2, originally designed for David Gilmour and traced by Aion FX in 2020.

I built a blender using the 'paramix' pcb. Sounds great blending a fuzz with the dry guitar tone. Lowering the fuzz in a fuzz circuit doesn't sound good. Blend is the way to go.
This has dry & wet control and phase flip, but just a blend pot would be enough. Too bad the aion cbs don't have it
This paramix design needs some love though as it's rolling off the low end

CJ, when you ordered from aion did you just say "one of everything"? Haha

I would like a better tubescreamer so that st2 is now on my list. My best 'always on' is a speaker cranker clone with asymmetric 1N60P diodes.
G

CJ med power and higher power Si have larger dies I have built treble boosts and fuzzes with them I have also used power mosfets in overdrive cicuits.
Parts to the left of the input are a simple guitar sim.
In the first schematic you can make the input into a switched capacitors type. I like the switched input caps better than the input blend in the schematic.

The first circuit I ever built was treble booster. I just happened to stumble across a pic: 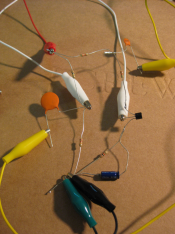 I had no clue about electronics. I remember going to Radio Shack and buying these parts and allegator clips and book called "Getting Started in Electronics that just had simple cartoonish drawings of circuits. This was 2009.

Yeah those are radio shack jumpers alright. 10 for $2.89 if I remember correctly. My BC Rich Seagull had a built in preamp with one transistor and 9 volt that looked a lot like that.

Gus do you think the extra leakage from the bigger transistors makes them sound like Germaniums, if so. 39 cents is a lot better than 25 bucks from France or the UK.

dmp. You have a schemo for that mixer? I bought the Aion sunn beta lead thinking it was 2 preamps with a blend, but no. The doc says buy two boards and use a mixer. So now I buy one more and build a blender. Yes. Cutting down fuzz sounds like dog. Every fuzz has a sweet spot. Replace pots with fixed resistors when you find it.

Built the univox superfuzz and it sure sounds weird. The volume swells up after 2 seconds when you really nail it. Must be all the 10 uf caps in the signal chain. 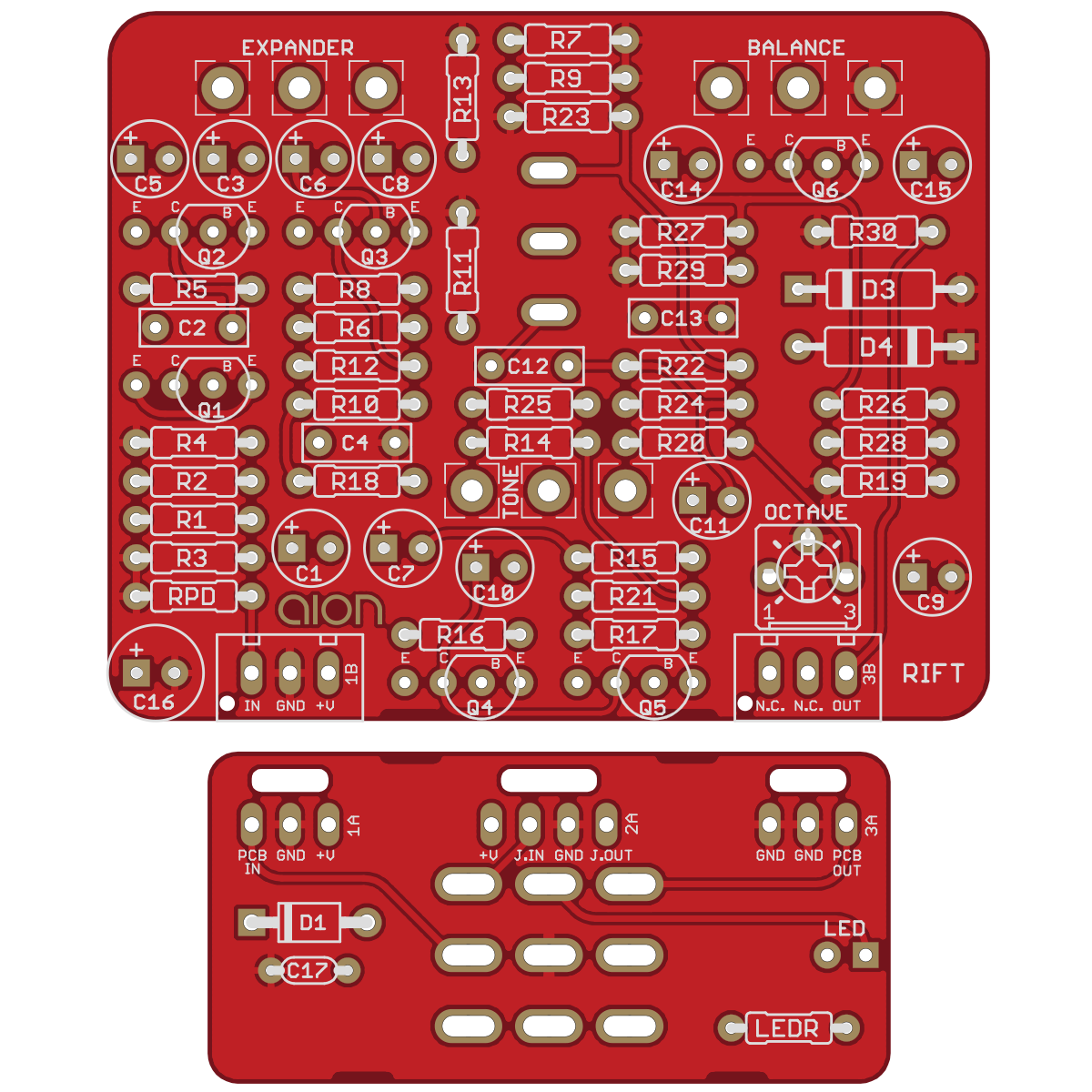 Based on the Univox Superfuzz / Shin-ei FY-6, a classic untamed fuzz from the 1970s that adds an octave-up overtone, made famous by Pete Townshend.

I should get free boards from Aion for doing all this promo.

Gus said:
CJ med power and higher power Si have larger dies I have built treble boosts and fuzzes with them I have also used power mosfets in overdrive cicuits.
Parts to the left of the input are a simple guitar sim.
In the first schematic you can make the input into a switched capacitors type. I like the switched input caps better than the input blend in the schematic.
Click to expand...

" Power MOSFET into overdrive circuits" Hey Gus, can you do that with Ge transistors?
Like the US7148526B1

Any drive circuit for that or similar? Thanks!!!

Gus said:
. I like the switched input caps better than the input blend in the schematic.
Click to expand...

Can someone chime in on what this stepped switch part is? I noticed a stepped switch used in Range-master style boost boxes like the ones made by R2R (pic attached from Reverb).

EDIT reading this I realized it might sound coarse. I did not mean it that way diystompboxes has a lot of good information that shows up with a search.

The larger die often should should have lower beta at effect currents. The med power don't sound like Ge.
FWIW I built a Tip 29 treble boost with a bias control years ago and people who tried it often play for some time testing it. Unlike people just being nice saying it sounds good with a quick test and maybe not thinking much of it.
A often use external bias controls on a fuzzes and TBs. However I don't like them in the output collector of a FF like.

Here is a nice Si Supa/ TB like fuzz 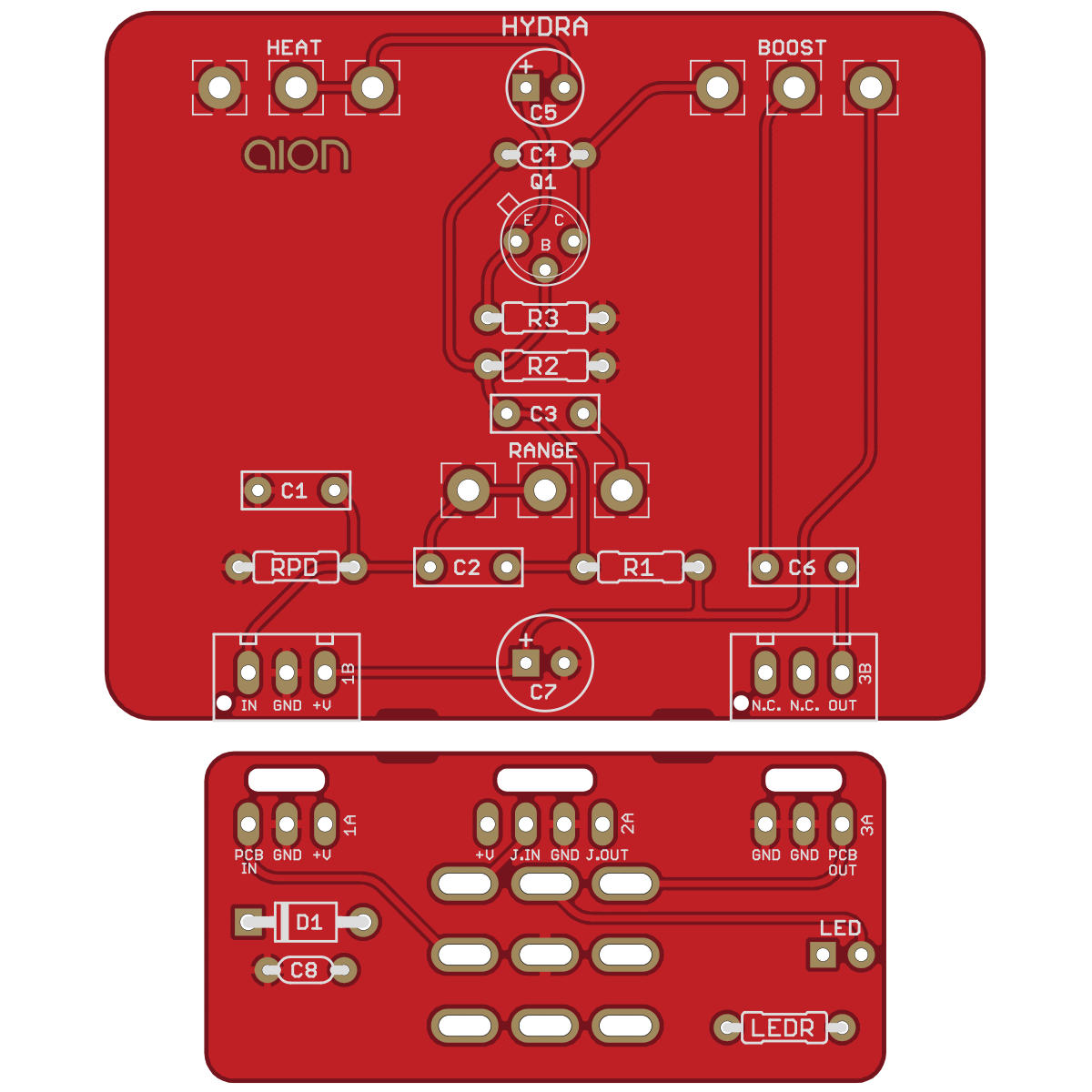 Based on the Catalinbread® Naga Viper, a silicon adaptation of the classic Dallas Rangemaster circuit with a few hot-rod modifications for added flexibility.

You have a schemo for that mixer?
Click to expand...

Here is the build doc
only $7
I used 0.1 uF caps and it rolls off the low end though. I think some of those caps could be omitted to make an improvement?

Runoffgroove has a JFET-MOSFET version with adjustable low cut. I built one maybe 12 years ago. Good for boosting level, cutting mud, and adding a little harmonic sugar.

Aion FX you say? I've built a few of those. There's a couple Mad Beans and some others but most are Aion. Oddly enough, I never built a treble booster. Going to have to get going on that, least I be disqualified. 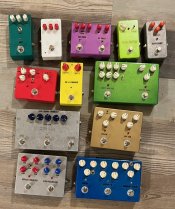 Speaking as a guitarist here, and imho of course, but I don't see why any and all Treble Booster variation circuits ( basically one transistor ) can't be in-body instrument preamps.

Even if done with op-amps ( to do more in the same space ), these are basically very simple circuits that are best in front of everything else, all the other endless gain stages, down to the amp, or nowadays, cab sim and ambient fxs.

And even if one pot, it needs to be blend, say two Qs, dry low & Ge treble boost.

It's not like I invented it, between Alembic basses and all the guys in the Grateful Dead,
lots of great in-body or on-board pres, basically a souped-up tone control, as It should be, since the
Treble Boost circuit can barely qualify as an audio filter with the stock circuit.

I have several guitars and want to be able to use the Omega regardless of which one I'm playing. Also don't like batteries in my guitars and sure as heck not going to drill extra holes in any of my Rickenbackers.

Well I want to have the least number of pedals up front, preferably only the Wha, so I planned to put one
Booster inside the wha enclosure and have a separate foot switch ( under the heel )

Then again I could have a FF pcb inside the Wah instead.

Some of my guitars already have battery holder. With the Booster as on-board pre, I could have
Booster, Wah & FF with one pedal ( my Vox 847 with "Derrick" Wah upgrade pcb ) into the first
rack valve pre, then a Boss Blues Driver, the analog section of a Roland Gp-8. Into the analog
section of a dual valve. Gsp 2101, print for re-amp.

I want to do potentiometer "swells" with the booster's blend pot ( and there is more )
So the on-board pre.

But an option is to have it all in the Wah enclosure, even though I'm trying to avoid the
Side switches. Toe/heel switches only, with status leds. 18 v.

Also this is for my own custom needs. All my guitars are stereo, have weird custom tone controls. Some have added piezo ( acoustic/synth ), three outs.

Just exchanging some of my ideas, ultimately, to each player its own gear.

Jerry had to have two cords but what a sound. And i like the way he his effects mounted up high instead of on the floor, these soft touch switches can be easily activated by hand,

Morley has a cool boost circuit in their wah/boost chrome bumper series from way back,
these overdrives and fuzzs can make you neurotic, i had to listen to some george jones just to detox from the last session with the sunn beta lead in a box,
that filthy sanchez combo box is the way to go, saves path cords and space and it don't flop around like a mini screamer.

Tillmann said:
I didn't know about Aion FX. Ooo boy. That's a lot of top-notch crud to build. I was just looking at the Laney Tony Iommi Signature Boost pedal earlier in the week. Aion's seems like a much cooler option for me.
Click to expand...