Also, I've been thinking about the preamps.. if they become unavailable I can probably fit new components and IC's but in general, how questionable it is to copy/reverse-engineer a PCB/schematic? Or would it be better to come up with a design and roll my own? I feel I haven't really DIY'd anything.. (edit : same goes for the EQ too, although I never really paid attention to filter design.. I'm not looking to sell these though, I'll be lucky to get it working in the first place.. maybe make another prototype with faders or something)

Cleaned the HP amp PCB a bit.. it's got jumper wires etc. I was thinking of getting rid of the whole thing (edit : I think it doesn't make much of a difference for home use, my PM-90 has about 1/5 useable range in the HP vol)

Tested with "ungrounded" pots.. doesn't make much of a difference though.

efinque said:
Also, I've been thinking about the preamps.. if they become unavailable I can probably fit new components and IC's but in general, how questionable it is to copy/reverse-engineer a PCB/schematic?
Click to expand...

As anyone can buy it, it is in the public domain. Therefore you can copy it unless the owner has copyrighted it (by simply placing a copyright notice on it) or by registering the design in which cases it is illegal.

Took out the HP amp.. no sound whatsoever, I thought the line preamps alone would've sufficed (edit : for home use)

The problem with that in the long run could be the impedance; the headphones I've been using for testing are 55ohm (most DJ headphones are in that range)

EDIT : I'm also trying to get rid of pops in the master when switching the PFL source.. I remember reading a (shunt?) capacitor somewhere solves the problem.

EDIT 2 : some of the copper traces peeled off during soldering (I think it's because I had my iron at 450C), maybe rebuild it on perfboard?
T

Was just about to flag the previous post ,but it vanished , proper place for it in the bin , I hope no one clicked the links .

-all the channel preamps (incl. master) now use 10-pin bus connectors except the mic channel (ie. they can be replaced with jumpers or another compatible module, line preamps have breakout wiring to the trim controls)
-stereo to mono summing where needed uses 10kOhm resistors
-HP out is now modified to use a cue/pgm blend (the grey pot next to cue select)

EDIT : here's what it looks on the inside: 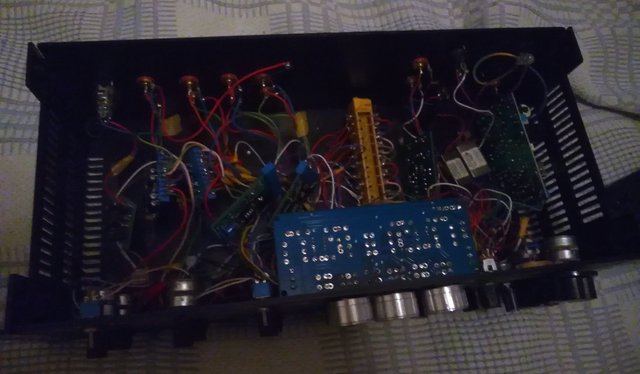 The modules on the left are input channels (the blue things are the bus connectors, not the two which are in the front panel, they're mic on/off and EQ bypass switches).. the yellow "bar" in the middle is the summing bus. The master output preamp is next to it on the right as are the output transformers (the aluminium boxes), the PSU is the green PCB on the far right. The EQ is the blue PCB attached to the front panel.

EDIT 2 : I also bought some shrink tube which I was thinking of using for the PSU/mains wiring etc.. they're mostly hot glued for now. There's a bit of other mechanical stuff to tackle as well like securing wires, PCBs etc

Here's a close-up of the modified monitoring/master section : 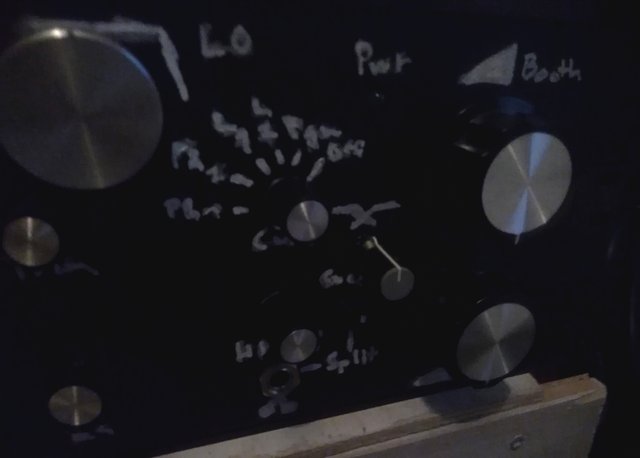 It now has split cue function, the cue select feeds the left channel (tip) of the HP out and the master feeds the right channel (ring).. with split enabled the channels are separate (you hear cue on the left and pgm on the right, the cue/pgm adjusts the balance between the two), with split off the tip and ring (L/R) are summed so you hear them from both cups.

To use it the way it was turn cue/pgm to cue and disable the split cue.

EDIT : the changes made to master section are only cosmetic as I had to make space for the monitoring modifications apart from connecting a ground wire that was loose.. I also put the headphone amp back in, it's kind of crowded in there though.

I'd imagine it makes modifying and servicing easier in the long run as each input module now has it's own power supply terminal similar to the summing bus (earlier they were all just twisted together as +/-), also noticed a few wires had become loose/unsoldered so there's a bit of minor fixing to do.

The smaller 2ch mixer I built earlier from leftover parts and then scrapped to build the xover had me thinking so I rebuilt it with some modifications.

First I assembled a roughly 6-7RU (300mm) slanted 19" case from an amplifier project. The bottom is hardboard, sides are 18mm thick pine and the top panel is plywood.

I then attached a transformer and a power supply board (from an old tape deck), along with the mains AC wire which runs to the back panel via a screw terminal in case it needs to be modified to fit inside a rack. I also drilled a hole for the power button.

Then I wired a 12-pin screw terminal bus in parallel (stereo configuration) so there's 4 left, 4 right and 4 ground with L/R/gnd terminals which forms the summing bus (the L&R ground signals are summed). These are connected into preamplifier inputs via a bus connector. The preamp is a now discontinued Velleman K2572 universal stereo preamplifier kit I built earlier.

The preamplifier output is split into 2-track out and a 100kOhm stereo potentiometer which feeds two 6,3mm unbalanced master outs. The 2-track in/out uses a two pair RCA terminal, the input is connected to the summing bus.

These are also connected to the summing bus, the mono channel uses an Y-split to L/R with 1kOhm resistors to maintain stereo separation between channels. The channel strips have 100kOhm potentiometers as volume control.

The PSU provides 30VDC for the preamp and 9VDC for the power on LED via ballast resistors.

It could benefit from per-channel HPF/EQ and -20dB pad switch too, and metering.

Here's a pic of the internals with the PSU and summing bus/master section visible (you can also see the channel configuration wiring on the front panel) : 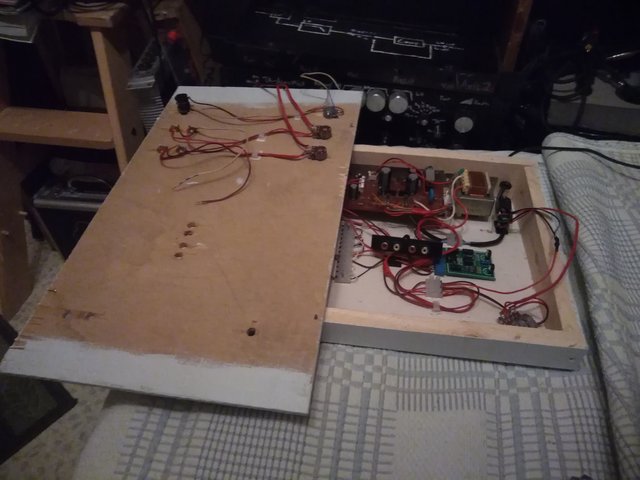 And a pic of the front panel in place : 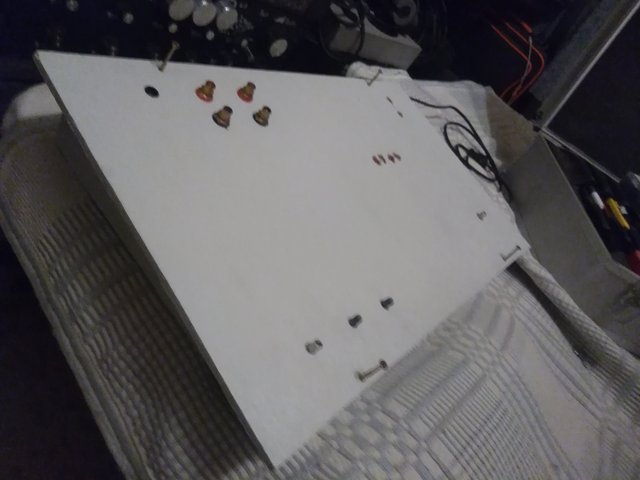 Stuff I've added since is the power on LED (in the front panel) and panel markings etc.

Regarding the 3RU mixer; I added a L/R input trim in the line channels which is basically a 1kOhm trimmer with a through-chassis hole around the back panel so it can be adjusted with a flat-head screwdriver.

This is to serve as a "dummy load" between the input and the preamp to prevent the channel from clipping/distortion since I noticed a lot of tape/CD players (esp. ones for DJing) have different output levels and usually no output volume control (my initial assumption was that the input sources are often low-gain as such and there is no need for one but I added it regardless)

Another advantage is L/R balance as some input sources may have different L/R output levels due to their output circuitry and cables etc.

In the latest 3ch mixer on the other hand I added a switch to mute Ch1 (I assume I'd use it as a microphone channel as it's mono and all microphones don't have an on/off switch) and rubber feet for tabletop operation.

EDIT : here's a pic of the input trim mod from the inside : 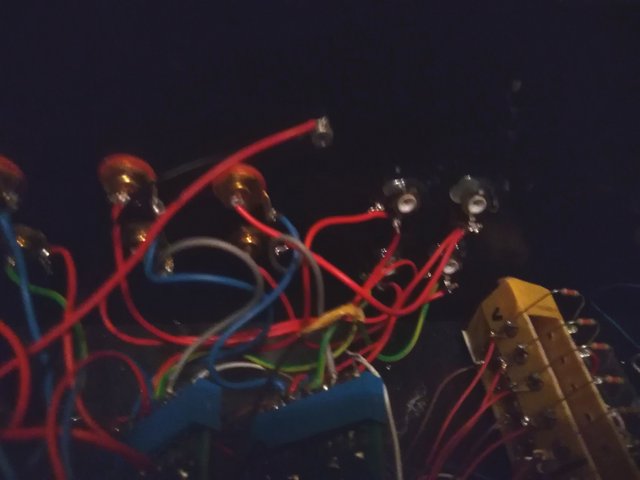 and a front panel pic of the tabletop mixer build (also added a 220kOhm trim to adjust supply voltage to preamp, a 3,5mm headphone out with volume control and handles) : 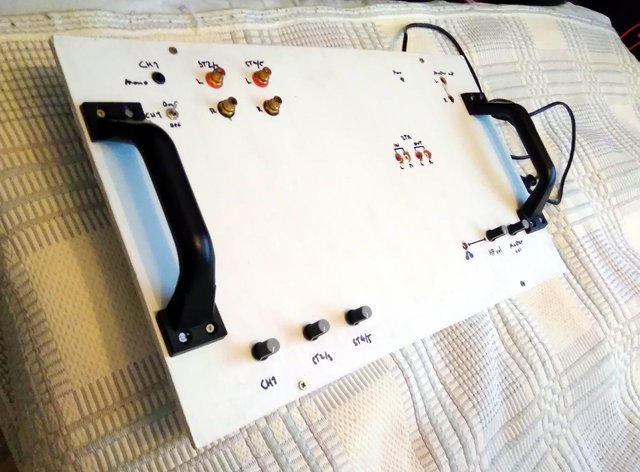 Added a 2-band master EQ, cleaned the wiring a bit and updated the front panel with a functional block/circuit diagram. 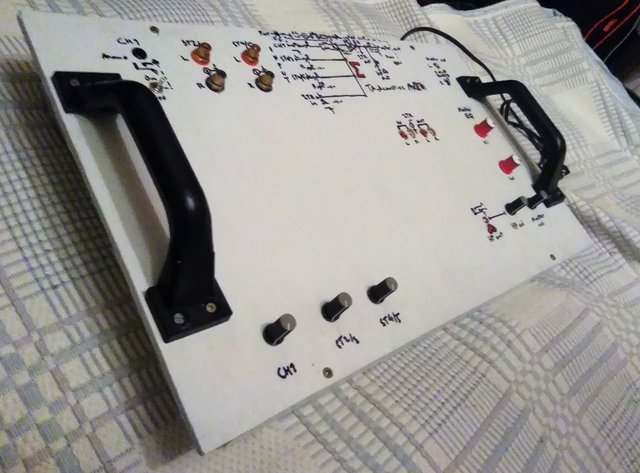 The EQ sounds surprisingly good (I didn't listen through the channels yet, I tapped into the master out post-preamp) given that it's made from junk/spare components like the rest of the device.

EDIT : I used an online function graph calculator to plot the EQ slopes (it's over ten years since I used a function calculator, last time in high school so it's a bit crude) : 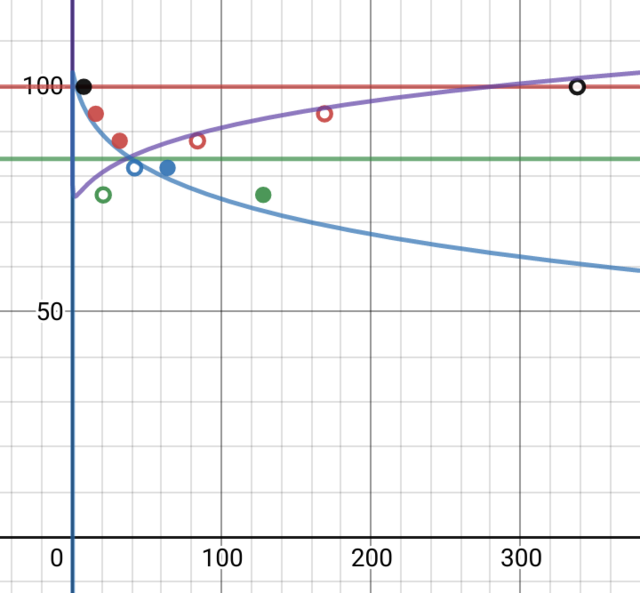 The functions I used to plot the graph were:

where a is the center frequency (in Hz), b is the loudness (in dB).

X-axis is the frequency and Y-axis is the loudness in dB. The green horizontal line is where the passbands intersect (ie. the frequency response is "flat"), the red line is loudness (at 0dBu) which I set at 100dB (I first had it at 40dB which is the preamp gain I'm using)

Monday at 8:49 AM
abbey road d enfer
A
B
A little console to simplify tracking, somewhere between mixer and monitor controller