I often get asked for standard API 500 compatible DIY kits, so I decided to offer a MKII version of the OV560 HiZ. 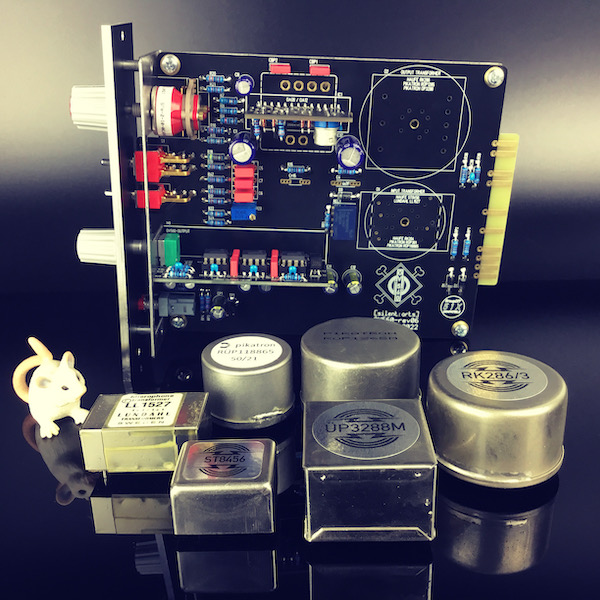 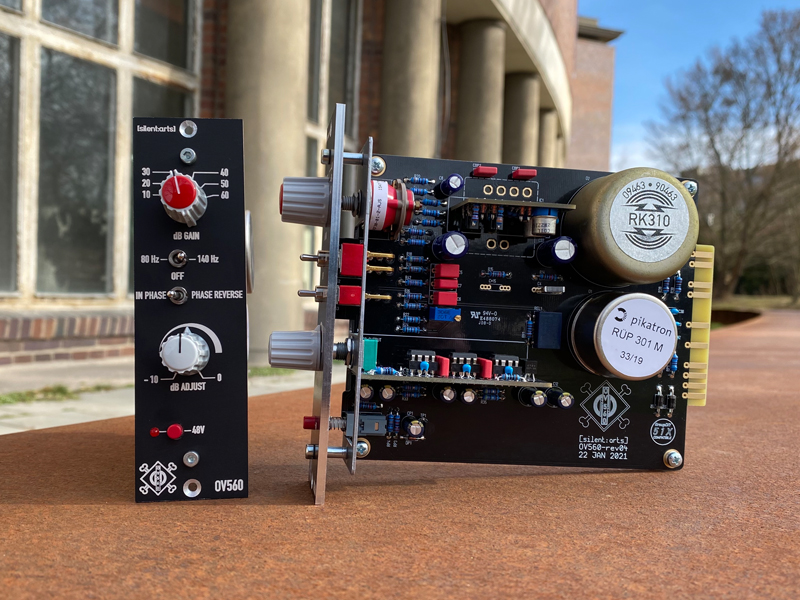 Finally !
Thanks for makes that happen Volker !

Hi everyone,
I just finished building a MIG VPR Eleven-Space Rack and a OV560 MKII (my first builts ever). I had the VPR Floor Box PSU Bundle (Two DC Cable) assembled by Volker.
The first testing was okay, everything seemed to be fine. After moving it to another place I had trouble with phantom power so I noticed that the fuse broke. I replaced it and now it's back working (both the Midas 502 I bought and the OV560 MKII).

I noticed some "scratching" and "humming" noise:
- when the gain is set to 10dB (lowest) and the dB adjustment is to -10 I hear some kind of humming or interfering noise
- when moving the db adjustment I noise decreases and I can hear some kind of scrating noise when moving the knob
I can't hear these noises when the gain is set to 20dB or higher.

Any ideas what I might did wrong. (I suppose that the rack should be fine since I don't have these problems with the Midas 502).

Thanks for your help!

Look for a bad solder joint at R21. It is the only different component in the 10dB setting compared to 20dB.
P

Thanks for the hint. I checked R21 and it should be fine as far as I can tell.
Could the solder joints at S1 be a problem as well?

I might have to add: the white noise (rauschen) isn't really there at -10db (adjust), it starts slightly after I begin to turn the adjust knob.
Last edited: Jul 21, 2021

Ah, I re-read your post and found my misunderstanding (I read the noise is only at the 10dB setting).
Ok, let us forget about R21 (only relevant for the 10dB setting).
I guess you calibrated the DC offset with R23.
Your noise can either be from a broken or bad connected C8, or the potentiometer itself.

I won't be in town for the next two weeks, but if the problem persists, send me your OV560 after Aug 8th and I'll take care of it.
P

Okay. Thank you. I'll get back to you if I can't solve it.

If you are experiencing problems / weird behaviours at the lowest gain setting (10dB) this could be caused by some high frequency oscillation of IC3. Looks like the circuit conditions are on the edge for "modern" NE5534 ICs.
You can fix this behavior by placing a 33pF ceramic cap between pin 2 & 6 of IC3: 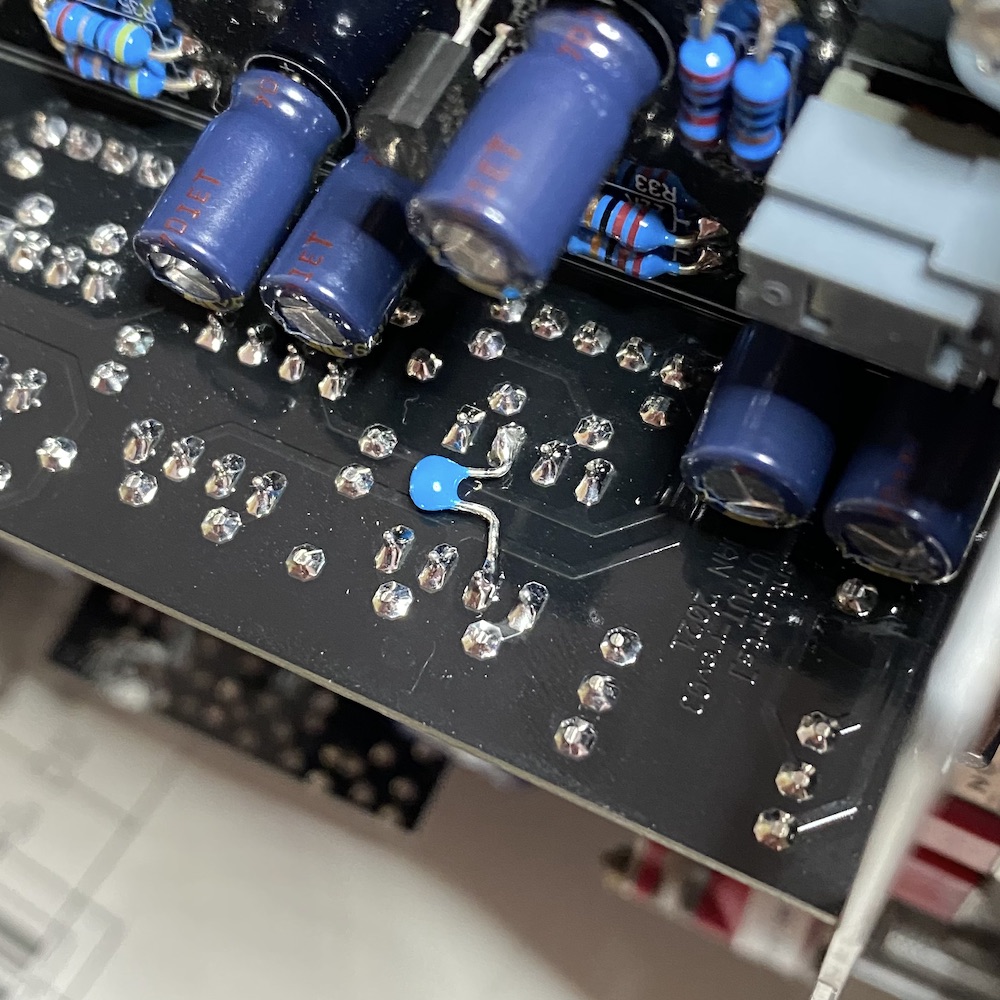 First post so bare with me Finished a couple of these. Was a nice and easy build. First one went really well and fired up without a problem. Kind of forgot to test the other one, just did and I fried r33 and r34.

Anybody that could help me trouble shoot?

Your supply lines are shorted / shorted to ground

Take out all opamps ( if socketed ) and try again? Then re-insert one at a time?

check T1 and T2, maybe you have changed them.

Super, Volker! Is it possible to get some kind of description of the different characteristics of these input and output transformers, and what each choice means for the sound of the OV560? (I know this might not be your favourite question!)

You are right, this is not my favorite question. I'm not known for commenting subtile sound difference. And the sound is not always in the iron ...

Some background why we started experimenting with different transformers for the OV560 mkII rev06:
The RÜP301 / RK204 can't be manufactured anymore, the original core material disappeared from the market. We asked Pikatron to design a follow up to the original specs - the RÜP118865 - but it was unclear how long it will take, and if we could afford the costs. At the end it didn't take as long as expected, and we decided to let them do a run of 50 pieces for us. However, the price of EUR 95,00 for an input transformer won't be everyones cup of tea.

In the meantime I did made two prototypes with the Haufe ST8456 and Lundahl LL1527 transformers and sent them to my beta tester. The ST8456 first measured its -3dB point at 18kHz, so I removed C4 which moved it to 58kHz. "For vocals I keep choosing the Haufe because of the open top end". We removed C4 for the Lundahl too but there was not much audible difference in the beta testers setup.

Long story short, the Pikatron RÜP118865 has the original sound, followed by the Lundahl LL1527. The Pikatron has the better measurement parameters, it is designed to the high German broadcast specs we had in the past.
The Haufe ST8456 is a cost effective alternative, with a slightly less vintage sound.

The output transformer in the OV560 is less critical, the original was also available without it. The RK310 from the original is still my favorite 1:1 line transformer, but my original stock dryed out. As far as I know Haufe can still manufacture it, but at a very expensive price.
The difference in price between the 3 models we now offer is not a mark of quality, it just reflects my inventory and the price I paid for it.
The Pikatron ÜP3288M and Haufe RK286/3 are used and taken from old broadcast modules. I bought the Pikatron RÜP1265 new in 2009 for another project that was never published.

Does this answer your question?
T

It certainly does - thank you! I am planning to order some items from you, and this information definitely helps me with deciding the OV560 options.