This is a new one to me.

I was working on a 3 channel 1930's preamp designed for ribbon microphones which has the center tap of the input transformer primaries grounded, as was the fashion.

Two channels measured correctly, with an EQ rise of a few dB up top to counter ribbon response droop.  One channel was 7 dB down from the others and had a relative +44dB spike at 20kHz, with a +25dB spike an octave up, otherwise response shaped like the others.  There was also a 12dB 60Hz spike.  The spikes look more like a single frequency interference than a transformer resonance.

After touching up a lot of joints and checking sockets, I transposed the grid leads across a pair of the input transformers, and the good and problem results swapped channels.  Eventually I spot the problem transformer does not have the primary CT connected to ground, it's been floated by someone.  I have never seen this be a problem, in fact normally a solution for phantom power or unbalanced usage.  Reconnecting it to ground, the problem disappeared, and response measured as the other two channels.

What mechanism might be in play here?  The transformer windings all measure correctly for DC resistance and inductance.  I can't think of a time I've seen any response difference after floating an input primary in similar cases.

I did not have the time to lift another channel for comparison.
The pink noise test signal was fed from a balanced output through a typical 20dB mic pad of 'U' variety.

Possibly the centre tap is also internally connected to an interwinding screen?

Good thought; it's not drawn that way, and the screen does have it's own terminal brought out.  Drawings aren't always truthful.

I've a couple loose examples of this transformer, will have to look at them more closely when the chance arises.

Here's a redraw with more measurements, which I need to re-confirm.  7 and 4A are tied to ground, 6B is grid, and the errant response was simple disconnection of 1B/3A from 7. 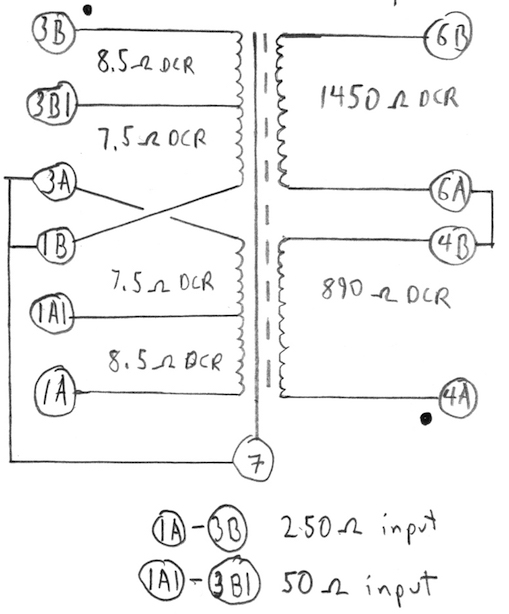 what Ian said, when you ground the CT, the primary becomes "earthy" meaning that the capacitance between the windings changes,  so this capacitance is changing the response curve on the top end, and the shielding effect affects the 60 Hz from getting to the hi z secondary which has more hum pickup due to more turns,

What about this winding differs from every other?  I've probably looked at another 20+ CT grounded inputs both grounded and floated, and never seen the slightest trace of change in response.

The only thing I can think of seeing drawn, on a different transformer, was an interwinding screen between the halves of the primary as well as between the pri and sec.

Why would there be an overall loss of 7dB at 1kHz when floated?  Overload related to the 60Hz and 20kHz spikes?

Perhaps I have a test rig fault that is erased by the CT connection.  With a test source fault I would expect to see a steadily high passed slope to the plot, even with the resistive shunt of the U pad.

The other two channels look like the red plot.  The outputs are improperly loaded at 10K in these tests, the bottom flattens out a good bit with a 600 ohm load.

Tertiarily, you see the typical (as I understand it) hum-bucking winding resonance notch up around 30kHz, that I assume to be from the secondary side having a single-ended connection, which disappears with a push-pull connection.  Though this may not be proper hum-bucking really, given the large DCR resistance differences in the secondary sections. 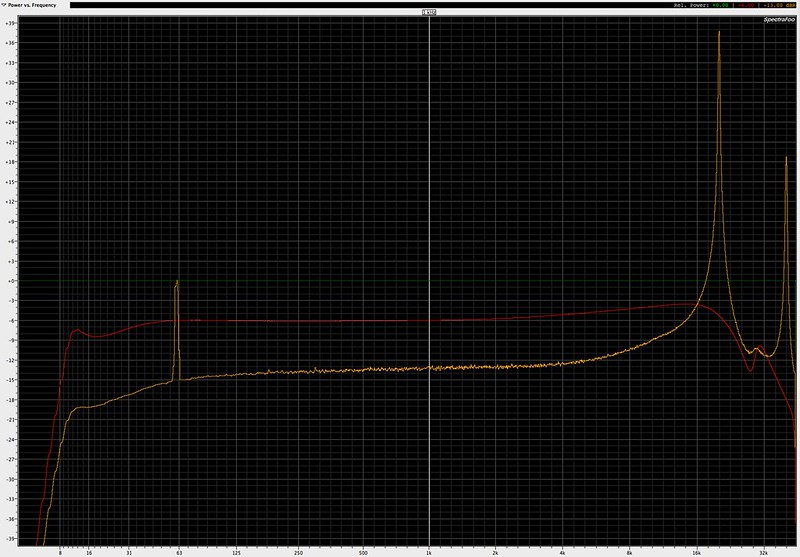 Just for fun, try shutting off any nearby CF bulbs or anything with a cheap switching supply, and rerun the test. I see a 20Khz dirty tone with a 1st harmonic at 40Khz. CF's do that. LED may, too.

There is something to be said for old-school incandescents over a test bench.

Thanks Gene, yup, tried shutting various nearby things off and on, no change.    No difference in ambient effects here than from all the other transformers I've tested which didn't show such a result.

yeah that transformer has to come apart,
A

emrr said:
Here's a redraw with more measurements, which I need to re-confirm.  7 and 4A are tied to ground, 6B is grid, and the errant response was simple disconnection of 1B/3A from 7.
Click to expand...

I would suspect one of the windings to be reversed. That would not show on DC measurements, but the impedances, transfers and CMRR would be all over the place. You need to do AC measurements.

Hmm.  I'll have look again, I recall at least AC impedance measurements looking the same when comparing inputs with an LCR meter.  Maybe I'm misunderstanding something about coil phasing, but if a winding were reversed I wouldn't expect it to function properly for either condition.
A

emrr said:
Maybe I'm misunderstanding something about coil phasing, but if a winding were reversed I wouldn't expect it to function properly for either condition.
Click to expand...

That's correct. According to your description I thought it did not work right. Do you mean that when the CT is grounded, operation is absolutely identical to other channels?

abbey road d enfer said:
Do you mean that when the CT is grounded, operation is absolutely identical to other channels?
Click to expand...

Hummm... now, if you disconnect the CT on an other channel, does the same problem happens?

Yes, that's the next test.  Very difficult to get to, under a floated terminal board and the same solid core wire is wrapped through 3A / 7 / 1B / 4A in that order.  7 is dead center between 3A and 1B.

I'm working on another early 1930's RCA that displays the same behavior, massive resonant peak if the center tap is floated.


EmRR said:
The only thing I can think of seeing drawn, on a different transformer, was an interwinding screen between the halves of the primary as well as between the pri and sec.
Click to expand...

The drawing shows the usual grounded screen with the center tap connected internally, but the actual unit has a center tap wire on a screw terminal (meant for mic ground connection) that would allow it to float, so no truly trustworthy drawing in this case.

When the CT is grounded, the peak is reduced to +4dB at about 25kHz.

extra info:
They installed a secondary shunt cap to move cutoff down to 16kHz (advertised as flat to 10kHz), which also moves the peak down in frequency to +1.5dB at 12kHz.  It sounds best in a modern sense with the cap removed, as it stays substantially flat further up, only +0.5dB at 12kHz and +2 at 20kHz.

EmRR said:
When the CT is grounded, the peak is reduced to +4dB at about 25kHz.
Click to expand...

Just to make sure, this is with the interwinding shield grounded?

abbey road d enfer said:
Just to make sure, this is with the interwinding shield grounded?
Click to expand...

In the original example from several years ago, drawing above, the center tap terminals are also wired to the shield terminal externally.

I can think of a number of ancient amps that were wired CT ground in which treble response improves and extends a tiny bit when floated.
A

perhaps @MisterCMRR has some ideas here?