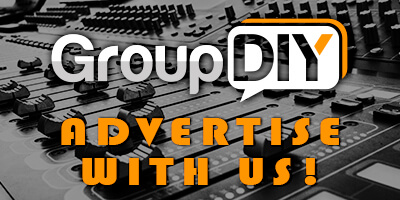 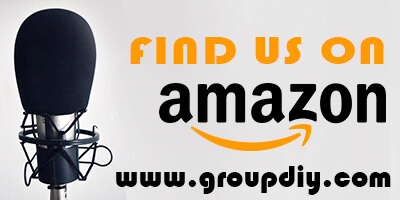 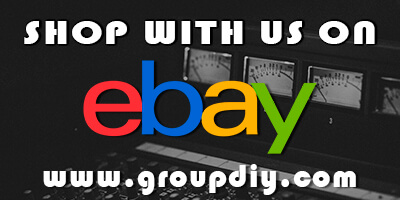 Some years back (6 to be exact, how the years fly by) I started thinking about building an AUX-expander for my yet to be built API style summing mixer (DR2402).
I posted a thread here on GDIY, but as a total beginner when it came to electronics, much needed to be understood to even know exactly what I wanted to build. Ian/ruffrecords and other friendly members chimed in, and so as the years passed and I finally finished the mixer it's supposed to expand in the first place, it was time to start the expander.

I contacted Joe from JLM, and gave him my specifications and parts intended for the unit, which he then very kindly offered to draw up PCB's for the design.
I had been working on the panel design for about a year or so, and wanted to use dual pots, both concentric and duals, as I wanted mono sends for AUX1 and 2, but stereo/dual pots for the rest. I also wanted to use an API style ACA, as to keep it somewhat in style with the DR2402 (color of panel and choice of fonts/symbols are made to resemble the design of the DR2402, as it will be mounted above).

All said, I wanted to make a flexible design that could be useful in different projects, and Joe did a terrific job on eliminating tedious wiring (which was the main reason for the pcb's in the first place!) and creating a pcb that fits well into his ecosystem of small building block pcb's. Another truly kind and helpful person in this weird fabulous world of pro audio diy. 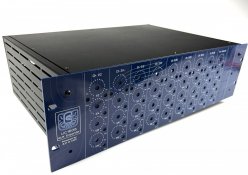 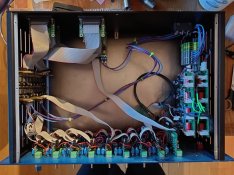 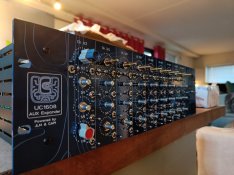 Frank from frontpanels.de CNC'ed my panel-design, and as often stated on this forum, did a terrific job. Although I made prototypes in wood with a laser, it was very comforting to see that all my parts fit snug and nicely on the final anodized aluminium panel. I was especially worried about the toggle for AUX 1, which is very close to the pcb. Switches are On-Off-(On), to allow for spontaneous dub-style echo feed in addition to normal on/off switching. Pondered using vactrols for muting to the minimize clicks/pops that inevitably take place using hard switches, but it quickly became very expensive, so standard toggles it is.

The idea for the panel was to line up the channel slots to my 10-slot API 500-rack to make channel-strips (albeit stereo instead of mono) somewhat alike a normal mixing board.
Still some wiring left to do, and I need to fit a power-supply. Also need to find a suitable metering-circuit (replicated 8 times) to use as LED-drivers for each buss. I built up the circuit from the VU/peak led-pcb from JLM on breadboard, which works nicely, but I want to use bi-color LED's so as to also show signal present in green in addition to the red overload indicator.
I am planning to use some rails originally designed for the scribble-strip for a Redco patchbay, cut and mounted in the last slot on each buss so to remind the user what it's connected to. The LED goes inside the rail, and would light up behind the printed text for that buss. Still need to cut these rails with a proper tool to get them nice and symmetrical.

Anyways, still some stuff to do before it's ready to be fired up, but after all this time, I really wanted to share what I've been working on for such a long time.

Here is the FPD / frontpanel design if anyone wants to use it as a starting point for their own design with these pcb's.
Few points:
-The red graphics shows the inner side of the NRG case. Are not produced
-The holes on the last slot are for mounting scribble-rails, so are a little small for normal 3mm LED's if you want to use them for that. They do however fit the screws that come with the rails so tightly that you make nice threads just by screwing it in.
-Panel thickness makes the use of washers on the pots a bit difficult; no chance for the concentrics, but you might be able to make it work with the dual pots.
-Pots used are BI Technology from CAPI.

Some updated pictures. Still have to wire up the power-supply but in the midst of moving houses so it'll have to wait.

L
Feeler: BBC AM9/4 or AM9/5 Germanium mic pre project

SSL SL9000J module and some other good gear