What LUFS do you aim for

I never paid much attention to LUFS, but the latest version of Audacity includes a LUFS normalisation tool which will set the LUFS of your track to any value you like. So I have been playing around with a few values and I wondered what values folk typically use. I quite like -11dB.

usually i shoot for whatever target value the various streaming services want to see, but barring that, my ears seem to like 11-12

Heya Ian! That's a very nice, and kind controversial topic! I'm not a mastering engineer per-se, but have been mastering small labels and independent music for about 20 years now and things have been changing a lot these last 10 years, from the total madness "as loud as you can" to the, sometimes, multiple painful versions for diferent platforms and listening medium.

Lately tho, with the increasing diminishing sales of the now "tradicional" physical media - the CDs - I have mostly been doing mastering for streaming platforms, and althought they have different codecs and other details, for these, I've been aiming at the -13/-14 LUFS averages. However, there's some other details to make the most of the mastering for streaming, as meaningful or even more than the said LUFS average. What kind of music you been usualy mastering?

LU have 3 ballistic... so before talking ref level we need to know which math we apply tu calculate ref "average"

mateus said:
x However, there's some other details to make the most of the mastering for streaming, as meaningful or even more than the said LUFS average. What kind of music you been usualy mastering?

zamproject said:
LU have 3 ballistic... so before talking ref level we need to know which math we apply tu calculate ref "average"

I thought there was a widely accepted IEC standard for this?

ruffrecords said:
I thought there was a widely accepted IEC standard for this?
Click to expand...

Not sure IEC is involved in the R128 EBU recommendations ?

I was joking more or less.
I suppose most of ppls talk about short-term integration (which is not far from Vu ballistic...)

At my side I'll say the good spot can be anything from -14 to -10 depending on music.
Over -10 I start to inform my client that limiting become clearly destructive.

Most streaming will normalize around -14, so pushing more should be an aesthetic decision, you won't be "louder"
Compact Disc stay another stories...

EBU R128 S1 recommends -23 LUFS. That is pretty wide dynamic range, it would correspond to a movie soundtrack or very high quality classical recording as examples.
AES TD1004 recommends for streaming purposes not lower than -20 LUFS and not more than -16 LUFS. That is still reasonably wide dynamic range.
Spotify and YouTube adjust material to a target of -14 LUFS, Apple Music targets -16 LUFS in line with the upper range of AES TD1004.

This page compares several different streaming services so you can get an idea of how they compare:
Loudness targets for streaming platforms

Mastering Engineer Bob Katz did a lot of the early work bringing attention to the lack of consistency in level standards and how there seemed to be competition to see who could make recordings with the least dynamic range.
If the EBU R128 standard is too dry reading this is a good series of articles to read over your tea:
Level Practices part 1 - Bob Katz
Level Practices part 2 - Bob Katz
Loudness War Peace is Almost Here - Bob Katz

Short answer is some places are OK with -11 LUFS, but that is a little high for most current recommendations, you would be better turning up your monitor level 6dB and aiming for -16 LUFS.

Cool! Those challenges are nice and fun, sometimes hehe.
Well, when I gotta master stuff that have such wide range of styles I try listening to all of the tracks looking for "connections points" between the tracks, content, both dynamics and eq-wise. The idea that works for me is trying to find what connects all the tracks as an album and what each one needs individualy to shine their best, then decide on how I can glue them together to sound like "from the same family". Most of the times, in these kind of scenarios, I try listening to what's in the spotlight, let's say vocals, and find a consistency between those tru the whole thing, once I get the spotlighted part of each track to sound with some kind of consistency between each other (not sure if that's the word), balancing the rest kind of flows easier. I would say staying in the safer zone of -14/-13 for most streaming will do the trick in these kind of scenarios.

ruffrecords said:
I thought there was a widely accepted IEC standard for this?

First it was an EBU development, that turned into ITU standards.

The idea came from a need for a precise tool to keep publicity from being way louder than the program.

I tried -23 on an existing mixed but not mastered track and it knocked the whole thing down by about 6dB. What does that mean?

Is there a program I can use to measure the LUFs of an existing track?

There's a few options you can give a try Ian, they'll help you monitoring and/or adjusting your tracks to a given LUFS target/standards, the one's I remember are the following:

Those are good examples, I've been using the Nugen one but all of them will help you out.

I think this one is also a free one, give it a shot!
K

ruffrecords said:
I tried -23 on an existing mixed but not mastered track and it knocked the whole thing down by about 6dB. What does that mean?

Is there a program I can use to measure the LUFs of an existing track?

I would recommend the Youlean loudness meter for measuring LUFS. It can be used in realtime or offline in a DAW. It's free and works great for music, but with a paid upgrade geared more towards post-production features. Also, compare your mix to some other references on the loudness penalty website at Loudness Penalty. On this site, you upload your song (and then a reference) to see how the streaming services will treat your master. Then compare your penalty to a reference you'd like to compete against to see if your mix will get penalized about the same.

For modern radio genres, the loudest part of a song, like the last chorus, usually measures -8 to -11 LUFS and the verses and intro will be a few dB lower. I find that the if the entire songs measures between -9 LUFS and -12 LUFS, you're competitive with radio genres. Hard-style dance, nu-metal, and other loud genres will be several dB louder (up to -4 LUFS!!). Softer genres, but still pop, will measure around -14 LUFS and classical and film stuff around -20 LUFS. Additionally, if the difference between your verses and choruses is more than 4 or 5 dB, you may not sound that great on some steaming services because some actually use a weighted average LUFS that favors the louder parts of the song (plus your song will be too dynamic for bad stereos!)

You don't want to chase the LUFS that any streaming service recommends because they will change over time- Spotify is in the midst of a change right now, so their current music varies by a few dB (which most listeners won't notice).

Also, you want to set your ceiling on your final limiter/maximizer for -1dB True Peak. That will keep any lossy compressions from clipping and sounding worse than they already do.

Thanks for the tips everyone. I will try a few out.

ruffrecords said:
I tried -23 on an existing mixed but not mastered track and it knocked the whole thing down by about 6dB. What does that mean?
Click to expand...

I think it must mean that the track started out around -17 LUFS, so when you requested -23 it dropped the level by 6dB to get to -23.


ruffrecords said:
Is there a program I can use to measure the LUFs of an existing track?
Click to expand...

If I recall correctly you are running Debian or Ubuntu based linux distributions, at least on some of your machines.
There is a linux package called ebumeter which has both a real time meter (ebumeter, connected using jackd) and an offline CLI tool (ebur128) that will analyze a file for you. The only limitation I don't like is that the tools do not have true peak analysis (i.e. analyzing after upsampling to evaluate inter-sample peak values). If your distribution package manager does not have ebumeter available you can download the source here:
EBUMeter source download
You may have to download some of the support libraries from the same author to build, but I can't remember off the top of my head (my distribution includes it, so I haven't needed to build it)
all Fons Adrienson source downloads

There are others, the Ardour DAW includes loudness analysis (with true peak evaluation) on export, and newer versions have a button to check at any time you want.

I believe you said you use Audacity, according to this document from Google there is a loudness meter which works as a plugin for Audacity, but it seems to be Windows/Mac only: dpMeter

You can use ffmpeg to both analyze and adjust the audio, but the ffmpeg command line options tend to be a little convoluted for me.
Using ffmpeg for loudness analysis
ffmpeg loudness filter documentation

ruffrecords said:
I tried -23 on an existing mixed but not mastered track and it knocked the whole thing down by about 6dB. What does that mean?
Click to expand...

-23 LUFS is a standard only for TV Broadcast, it's not a standard for music.
I Master music somewhere between -14 and -10, depends on the client.

For CD's there's no standards, you can use whatever you want.
For Streaming services there's some standards they use, although you can upload the files at any LUFS level you want, they will just turn the volume down for their standard, here is a table: 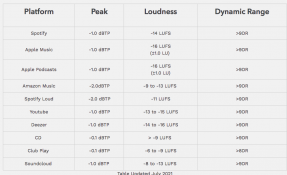 ruffrecords said:
Is there a program I can use to measure the LUFs of an existing track?

I use Waves WLM Plus for LUFS measurement when I'm mastering.
It's simple enough and gets the job done

For you old studio dogs....what do you consider to have been good investments?
2 3

Sep 9, 2021
abbey road d enfer
A
L
Can anyone tell me what this filter is doing?