Ok that does help.  I think I have it right then. Just a triple check.

dandeurloo said:
... Position one should be the highest resistance value correct?  So for the 100k switches it should be the 10.5k
Click to expand...

I always seem to make things harder then they need to be!  ugh


Thanks for the help.
B

band_master said:
thanks volker! just got a chance to fix the i/o xformers last night and now i am getting HUGE gain. also, it seems like the link mode is working properly as well. I will do some more calibration and testing over the weekend. quick question though, what is the best way to wire power to the jeweled power lamp and meter LEDs?
Click to expand...

best way to power up meter lamps etc is to use the relay switch PSU
Click to expand...

There are 2 LEDs in series in each of my meters, so I used a 47 ohm resistor for each meter. Is it best to tap the 5v before or after the regulator? Right now I have 5v from the terminal block before the regulator going to the power indicator lamp. From there I jumped either side of the lamp assembly to the positive side of each meter LED assembly. The - sides of the LED assemblies are jumped to star ground.

Does that seem right? I am getting power now to both LED assemblies as well as the power indicator lamp. Thanks for the help!!!

I'm very happy with the sound. This thing really kicks. Thanks Volker for the PCBs!

Now to correct a lifted pad on the output transformer connector, sigh..

Nice one!
What are the Filter and Response knob/switch?

Filter is the sidechain filter. Response changes the T4B cell that is in use. Do you see the 3 big holes on the back? Each channel could get 3 different T4B optos, and you could switch between them. So, vintage are the NOS T4Bs I have, Fast would be drip's fast version and modern would be IGS T4Bs.. when I get enough $$ I will implement this feature, currently it's a no-op that just looks cool

Let's call it the producer's knob?

"WOW this Modern response is so cool, you engineers have no idea, keeping it on Vintage all the time, I mean seriously, I should get mixing credit for this!"

Nice one, fooled my eyes on first sight, tought it was upside down

Yeah, I totally should have put the knobbies under the VUs.. don't know what I was thinking really. This way you have to be more at an angle when adjusting knobs and looking at VU. But ooh well, it's a DIY piece and I made it through so who cares. It's also the best La2a that I have heard yet.

It's using a peculiar trafo combo too, UTC A16 and A26

Wasn't a criticism, i actually tought that it was pretty original.

This way you have to be more at an angle when adjusting knobs and looking at VU. But ooh well, it's a DIY piece and I made it through so who cares. It's also the best La2a that I have heard yet.
Click to expand...

I guess should be the first one in the rack then.....

Well, it seems there is more to it than a lifted junction on the PCB... let's take this slow in a timeline

-- I first made this board to use with molex-like connectors
-- then since I had to wait so much time for molex tool and case front panel, I wired one channel directly, just to hear how it sounds
-- I enjoyed that channel for some time, until finally the case and tools arrived
-- I stripped the wires out and that killed one of the output transformer pads next to the relay - marked PNK
-- I pupulated the other channel and placed molexes into previously populated channel, making sure the lifted pad was soldered to the molex receiver before I soldered the other pins
-- On power up the new (previously unpopulated) channel works and the old one doesn't - the output is very highpassed
-- I trace this around, at it seems the signal is healthy after the 10uF solen
-- hooking up the trafo directly to the 10uF output + gnd and getting that to XLR produces a nice, clean signal, however since the VU connection is bypassed, but I have no VU movement for output (and I need that)
-- so I remove the molex completely and solder the trafo outs to the lower pads of the output relay (which are linked to the VU by the PCB and to the XLR out with the relay)
-- the sound is still highpassed (?!?!?!?)
-- also, measuring resistance between pin2 of input and output on that channel gives me some resistance that rises as if measuring a capacitor in circuit and that doesn't happen on the healthy channel

any ideas?? I've tried a lot of things, maybe the input XLR is shorted to gnd somehwere? Or the input trafo?

I used a-26's for both in and out.I had the same issue with one channel. I resolved it by taking a jump from the star ground and tying it directly to one of the pins( can't remember right now) of the output traffo on the affected channel. Not sure why it worked it just did. Sorry for the non-tech tip but worth a shot!
Run a signal through the channel and probe around the utc's with a ground wire and see what happens.

Hmm, now that you mention it... that channel used to have an A-24! I changed over to A-26 becuase I have a pair of them. Hmm, will try, probably one of the centertaps, geez..

You were right! The left channel suddenly works great after A-26 pin 1 is grounded. Including the VU meter and all.. now, if only I did this while I still had the molex instead of all these wires everywhere..

Thanks mate,  I owe you a fancy beer

now give us some insight photos of your beauty

Well, it's not quite as nice as it was before, but still... 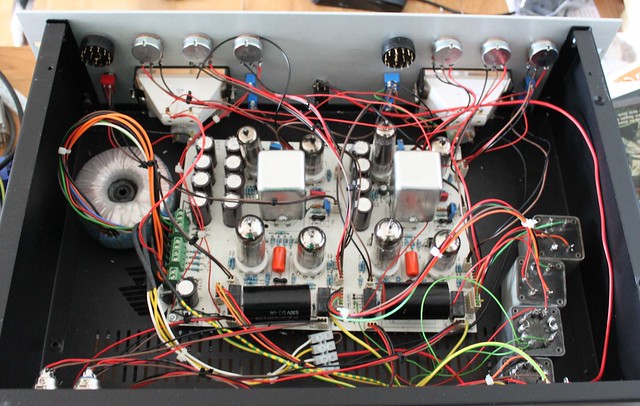 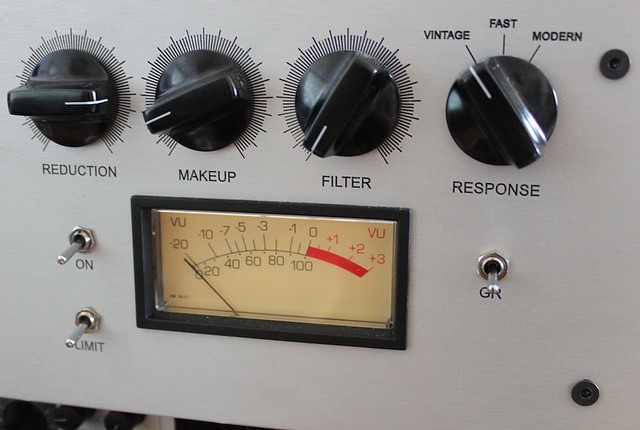 Also, she's in quite good company.. the rack itself is DIY ofcourse

baadc0de said:
You were right! The left channel suddenly works great after A-26 pin 1 is grounded. Including the VU meter and all.. now, if only I did this while I still had the molex instead of all these wires everywhere..

Thanks mate,  I owe you a fancy beer
Click to expand...