RCA 41B analysis and test results

In the 1920s and 30s, very clever guys worked at the forefront of what was possible with the limited components available at the time. When we see them using 1uF capacitors, it’s because they had no choice. They made the most of what they had and the RCA 41B is a good example of what can be done. I have redrawn the schematic without the jacks to make it easier to understand. There are three special features in this schematic, 1) The return of the second cathode to the first. 2) The bypass of the choke with a resistance. 3) The return of the OPT cap to the cathode instead of to earth. 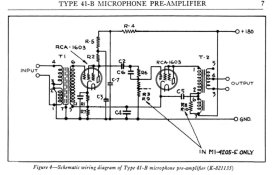 The tube currents given in the manual, together with the resistances chosen, give a voltage on the cathode of V1 of 6.3V. This makes perfect sense when you need to reduce the voltage difference between the heater filament and the cathode (to reduce hum) and you only have a 10uF cap!

The bypass resistor of 70k/120K helps to even out the impedance of the choke/reactor. The chart shows the difference with and without a 68k resistor. 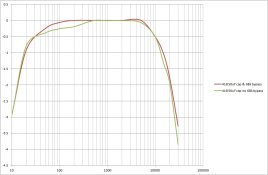 I constructed two output stages to test these features using the following components. Choke: Hammond 156C 150 Henries @8mA, OPT: Edcor WSM 15K:600. Tube:6C5 (equivalent to triode wired 1603/77). I first configured the schematic as a standard Parallel Feed with no DC in the OPT, then I arranged it as the 41B, in both cases I used a 50uF bypass cap on the cathode resistor. The chart shows that the frequency response of the 41B is better at both ends of the spectrum using the same components. 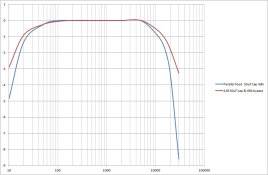 I don’t claim to understand why connecting the OPT like this is better, but I noticed that this trick was first used on very old Western Electric designs. Any suggestions welcome. 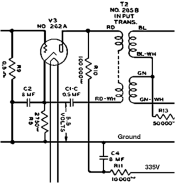 I did not include the treble lift circuit in the test because that well-known trick is used on every guitar amp and the 41B was specifically made for the RCA 44 mic. However, a quick test with a 100pF across 200k shows that the response is flat to 20kHz. This is a very good result using readily available components. Further improvement with these parts might be possible if the OPT return cap is tuned to extend the low end response.

Anyway, hats off to the RCA engineers who got the best out of their components. Maybe we should all experiment a little more instead of just copying standard designs?