Some pre-mod plots first.  No input transformer yet, or any other electrical changes.  Try to ignore the squigglies in some of the plots, result of fast settling times.  The last plot in this post also shows the original Collins 26C response.

You'll see we have a treble boost under compression, the Collins does not change with compression setting.  At this point I suspect the boost is in the interstage transformers, due to the way they react under source, load, and GR conditions.

various compression timings, all set for -6 GR.  This shows relative level change per setting.
Click this link for the full size plots

This one may be misleading, various amounts of GR, 32K resonance aligned.  Note the purple plot shows the extreme frequency changes that occur once you push GR past prescribed limits, that plot representing between 20-30 dB GR.
Click this link for the full size plots

10 dB NFB (green) in output amp versus previous.  This knocks down hum level and reduces the large amount of output amp gain to a more reasonable level.
Click this link for the full size plots

same again plus original amp plot (blue) and mid cut EQ bypassed (yellow).  Blue representing the in/out amp stage response without the bridge, yellow representing the effect of disconnecting the mid cut (effectively bass boost) which also negates the 32kHz trap effect.  You can see the lack of hum in the blue plot.
Click this link for the full size plots

to previous add -6 GR, A1 R1S, before (yellow) and after (purple) and add -6 GR, A50 R30, before (blue) and after (green), plots grouped on screen.  The slight improvement under compression can be seen in the frequency extremities.

400R between C3/T1 to decrease source Z into bridge (green), extra top boost probably related to knob setting, unexplained.  Present with 0R insertion.  This change also leveled out a bit of the top and bottom frequency changes under compression.
Click this link for the full size plots

Noise floor at this juncture, input pot off and output pot set at noon.  9:00-9:30 is a more normal output pot setting, so this shows more noise than would usually be seen.  I think this is easily improved.  Dave's experience says the inductor used in the 32kHz trap is the chief source of hum pickup, and this is positioned after the bridge, where approximately 37 dB of losses occur.  I think if I can get the trap fit before the bridge at high level, I can significantly reduce interference.

Dave fitted a metal plate shield between the output pot and the PSU section, and it was interesting to note the way noise changed with and without it.  It knocks 60 Hz down roughly 1 dB, but doesn't really touch 180Hz.  It helped the most between 1K and 8K.  The 27kHz noise peak actually appears a hair lower without the shield than with.
Click this link for the full size plots

I did find one grounding connection that was increasing noise initially, the front panel grounds were all joined and run to B- together.  Bussing input pot separate from all others decreased 60Hz by almost 4 dB.  Overall noise improvement of 17dB currently realized, hopefully more to come.

I can see the usefulness of an increase in side chain gain, and a reduction in output amp gain.  The output knob is frequently set fairly low, after mods still having 49 dB gain.  Side chain gain would help drive slow attack fast release setting to higher compression, while allowing inputs with more headroom.

I wouldn't want to go higher than 740R between C3/T1, that gives -0.5dB less at 31Hz than 400R does, seems to represent the upper limit of source Z.  In a new build you might just alter the source Z of V2.  With an entirely different type of interstage transformers for the bridge, you would need to redesign the surroundings, V2 setup likely different and EQ stages for bridge correction totally different, or unneeded, if you can find some of those magical generally unobtainium split winding 50K:50K interstages with full response.

I tried feed-forward operation to see what would happen, and found it mostly uncontrollable.  Abort!

For a new build, I'd suggest 50% bigger for accessibility.  1RU taller and 3 inches deeper.  Dave really packed it in this one!  Some things I might have tried would have been fairly long disassembly processes, while more space to move would make long term service more simple.

The unit got warm to the touch, but not terribly hot.  I have not taken a temperature after being on all day, but it wasn't bad at all.  Tubes off the back really help.

My final testing was with an Audio Precision ATS-1, unweighted 22-22K filters, 1K tone, 10 dBm return level (unity).  I am not an expert with this unit yet, so there are easily flaws in procedure.  THD+N is a tricky number to chase, and is easily done wrong.  Changing the source tone did not change result significantly enough to warrant exhaustive data here.

We see in the above that in/out settings are critical to noise, they are also somewhat self-governing in action.

If the above comment on max input level is correct, then the side chain amp could definitely have more gain to be able to get greater GR at A100R30.

The Collins and any other limiter preset for fastest attack at all times will suffer from the same SC issues with slower attack and faster release modifications.
26C type differs from vari-mu in the loss seen in the bridge, which makes for a very low signal level into the SC.

great Plots!!
What software is that you are using?

Hi chaps- as Dave mentioned I got back from holiday and been in and out of hospital the past few weeks...hoping to get round to posting some sound clips etc this weekend once I've reorganised the massive backlog of studio work!
Cheers
Jay
D

I had a lot of help from some clever guys as you can see.

The comp is waiting for one more East side auditioner to get a window to test, before it goes west coast and gets auctioned.

I would design it a little larger for the next one, but overall I was pleased with the results, it makes the top end of a recording very smooth and the rest rock solid, it should be an asset to any studio.

This thing made the rounds to about a half dozen listeners in the USA, all agreed it sounded great, but hum was too high.

I have just finished moving the PT's to an outboard PSU box, along with the B+ rectifier.  Interestingly, if I also moved the filament rectifier outboard noise got worse.  In the end I got hum component noise better by 25dB or greater at most frequencies, with a few frequencies getting a bit worse.  There are some very interesting 'proximity cancelations' at play, and every change is a trade-off of some sort.

Noise is now quite good, I can record fairly hot levels with limiting on human speech with no trace of hum unless I really crank speakers up loud, noise floor before the limiter being predominate in that case.  It'll be all buttoned up and ready for a new home as soon as I get the PSU cabling made permanent.

White is before, red is relative best case I found today.  Output control set to noon, which is a good bit higher than normal operating position. 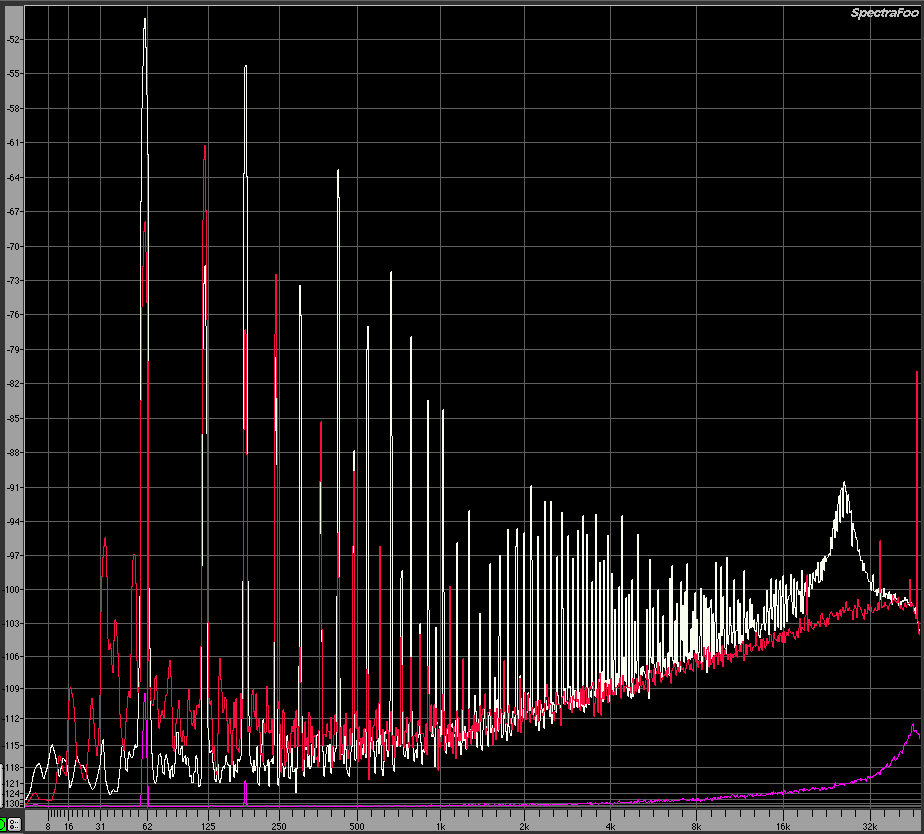 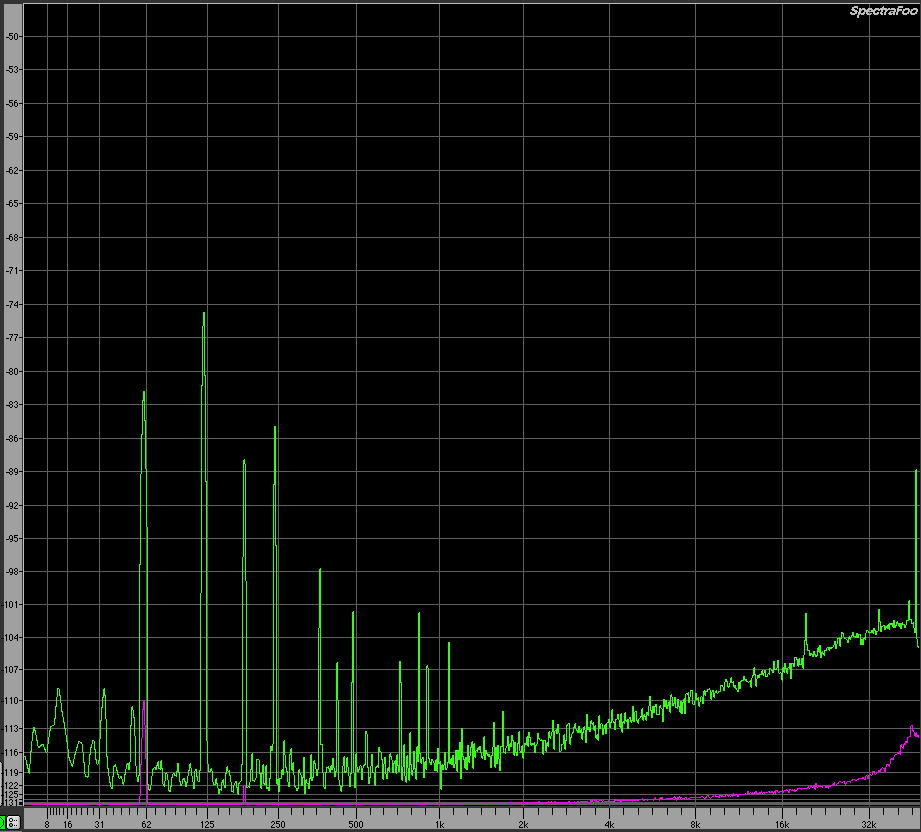 OK, delays surrounding connector order mis-step, correct connector in now, 10 feet of wire between power transformer box and limiter, max noise is now 6 dB lower than the plots above.  Hum is down below hiss where it belongs.

I thought I'd finished the job when my S:N ratio was the same as the original, just goes to show.

Just to remind everyone, the profits from the sale go to the forum less my shipping costs and Doug's costs.

This comp imparts what I call a silky brilliance to any recording no harshness whatsoever.  I would guess this is because of the extended top end response.

On what sources do you like it? A pair on a 2 buss is very tempting

Thomas, This was my report from earlier in the posts:-


"Jay had some mixing to do for a local band on Pro-Tools.  I was worried in case it did not come up to scratch because all I've ever put through it is sine and square waves.  We tried it on drums first and it sounded good.  Jay was able to compare the waveforms for different timings with Pro-Tools and seemed to think the top end was very well defined and smooth.  There was no hint of thumping at all.

When he was happy with the result we moved on to bass and did the same, we ended up with 20ms Attack, 30mS Release, these settings seemed to bring it forward in the mix.

We then moved on to acoustic guitar and ended up with, I think 50mS/250mS, with the same result.  At no stage was any noise detectable which was a great relief to me.

Finally we went to the fastest settings for lead vocal with 1mS/30mS all very smooth."

There you go
best
DaveP

I tracked a bunch of pop piano through it.  It was one guys favorite vocal compressor, another guy mixed a record using it on parallel drum bus. Another tracked banjo and drum room mics.  It's pretty flexible.

Hi folks....unfortunately right after Dave's visit I was very ill, for a very long time, so I never had chance to type up a proper evaluation! What I do remember, and this really just reiterates Dave and Doug, is that it was silky smooth and particularly pleasant on the high end. I was working on an indie guitar based album at the time so we tried it out across drums, bass and an acoustic guitar track. It sounded great on all these sources and is a genuinely versatile piece. I would also like to point out it was typical of Dave's excellent quality of build and workmanship. With a little more time it would've been interesting to audition it on some more aggressive tracks and some dance/house music hear how it performed...
Glad to see it's still here after my nearly 2 year break from DIY/recording/music too!
Jay

So glad to hear you are better Jay, that was one hell of a bug!
best
DaveP

After six years we now have a result!

The GroupDIY 26C compressor has been sold to an American DJ who has pronounced it "Awesome"!

After all expenses have been paid, Doug Williams will be sending Ethan $400 for the forum.

In an effort to curb the impatience of my youth, my Dad used to say, "Everything comes to those who wait".

Turns out he was right!

Best wishes to all the contributors to this thread, this was for you.

Funds traveling to Paypal for disbursement.....

$400 donation made, expenses settled, and balance sent on to Dave!