I have had a request for one of these so I'll be starting this project in September and I expect it to take all winter.

The original is about 24" wide so not suitable for rack mounting, mine will have to fit in a rack and will be higher.

The original had removable boards, mine will be point to point.

Push buttons are not a viable option nowadays so mine will be rotary switches and miniature toggles.

Good luck to Ian's project as well, so there will be a fair bit going on in this section for a while.

Hopefully you're making it stereo linked while you're at it?

Your image is a plugin, that simply dosen't count.  the english version faceplate was translated wrong, naming the two mid controls "low pass filter" and "high pass filter" in stead of the correct high- and low band filter.

Seems logical. Attached my try at a front panel, it's absolutely possible to come up with user interface that works at least as good as the original. You need to know how you want to use the unit though. I have controls for levels at the top, functions in the middle, and frequencies at the bottom of the face plate.

The original had removable boards, mine will be point to point.
Click to expand...

- My UE-100's are point-to-point, no boards, and certainly not even remotely removable. Perhaps you're thinking of the simpler and later UE1000?

pro tip: you can get very good and cheap 6201 tubes at reichelt in germany


(apart from face plate these are EXACTLY the same, they track in stereo to a scary degree of precision)

How could they translate  X BAND FILTER by X PASS FILTER?
The words for "x pass filter" are the same in German and English...
Which country are they from?

abbey road d enfer said:
Which country are they from?
Click to expand...

Honest, I was not sarcastic. I had to dig a little to gather they are from Sweden, which is all the stranger, since Swedes are usually very good with language, as most Scandinavians are.

Aah, thought you were joking..

Klein&Hummel are from Germany - the "Stuttgart" on the front plate.

And they are very, very German

The basis for the UE100 was the idea to develop a maximally precise equalizer, and as inductor core material is notoriously temperature sensitive, they designed it around only capacitors as frequency-determining, switches controlling only resistors.

Wait, you may say - capacitors are temp dependent too..

..yes but - everywhere in this beast where you have a frequency determining capacitor, it consists of two paralleled precision capacitors: One with a positive and one with a similar negative temperature coefficient.. Pic related, it's the dual-styrene-like ones covered in red tape..

In my opinion over-designed in a way that only very obsessive-compulsive German engineers can be allowed to. Sometimes wonder if a bit of medication at the right time could have saved some pain here.

I have some very old German fixed frequency WDR (broadcast) filter modules, that also use that dual capacitor config. They are also exceptionally big for their capacitance values-
Always wondered what that was for... !

(They also use very hq inductors too, that I bought them for harvesting, but didn´t yet have the heart to violate the exceptional craftsmanship involved,  ;D )

DaveP, a worthy project for you,  you know you got us all salivating in anticipation!

(..please don't kill WDR modules, it's not that hard to grow new inductors...)
A

Klein&Hummel are from Germany - the "Stuttgart" on the front plate.

And they are very, very German
Click to expand...

I'm well aware of K&H, but my doubts were on Lindell Audio.
I may be wrong but I believe the German text is correct, the BAND FILTER being what we're used to call parametric (or semi-parametric since switchable). The other sections, far east and far west being shelving EQ's with a complement of standard asymptotic hi and lo-pass.

Don't take the Lindell too seriously, that one - albeit correctly translated - is only a nice graphics mockup to persuade you that the plugin sounds right. Note that for some reason only some parts of the front panel has been translated into English. It never existed in real.

The brutally mis-translated at my above pic is real and Klein&Hummel's own version for the english-speaking world..

What's the issue ? it's the same unit for freq measurement, now cps is obsolete but maybe not at that time ?

Any way, pleased be assured I do have a pic of the original front panel even though it will mean very little when it gets translated into a 7u 19" rack mount! 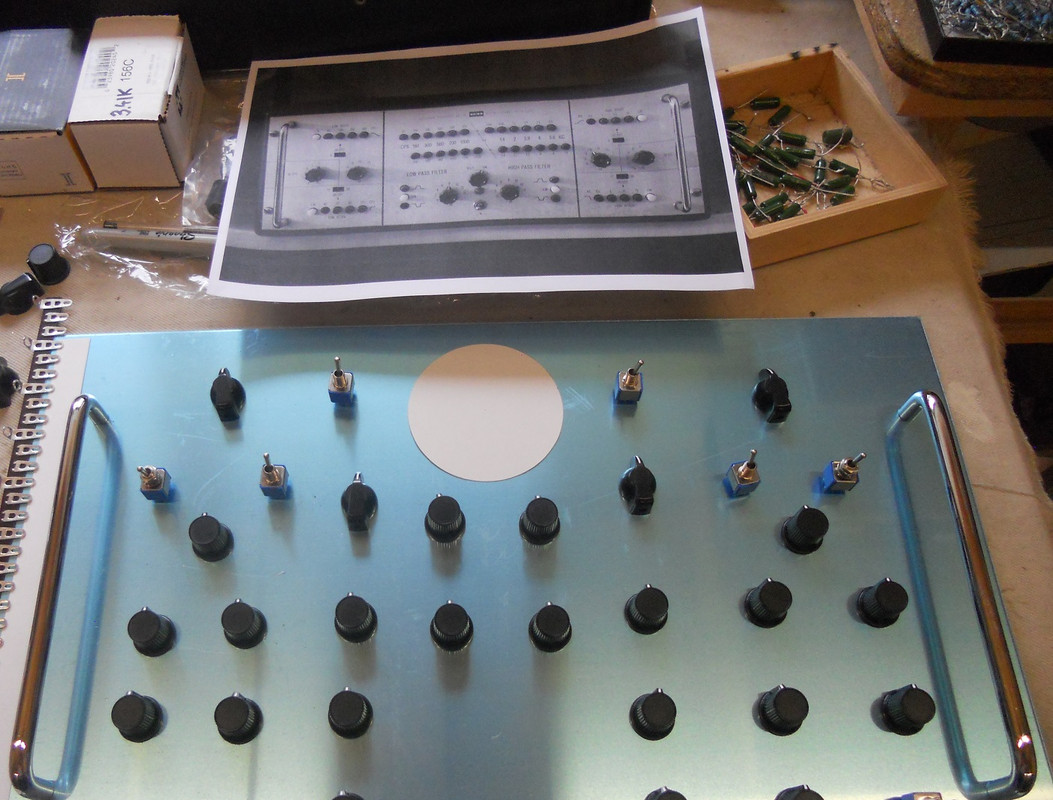 Covid 19 has played havoc with electronic component supply, some gear has taken 6 months to arrive, but here it all is.... 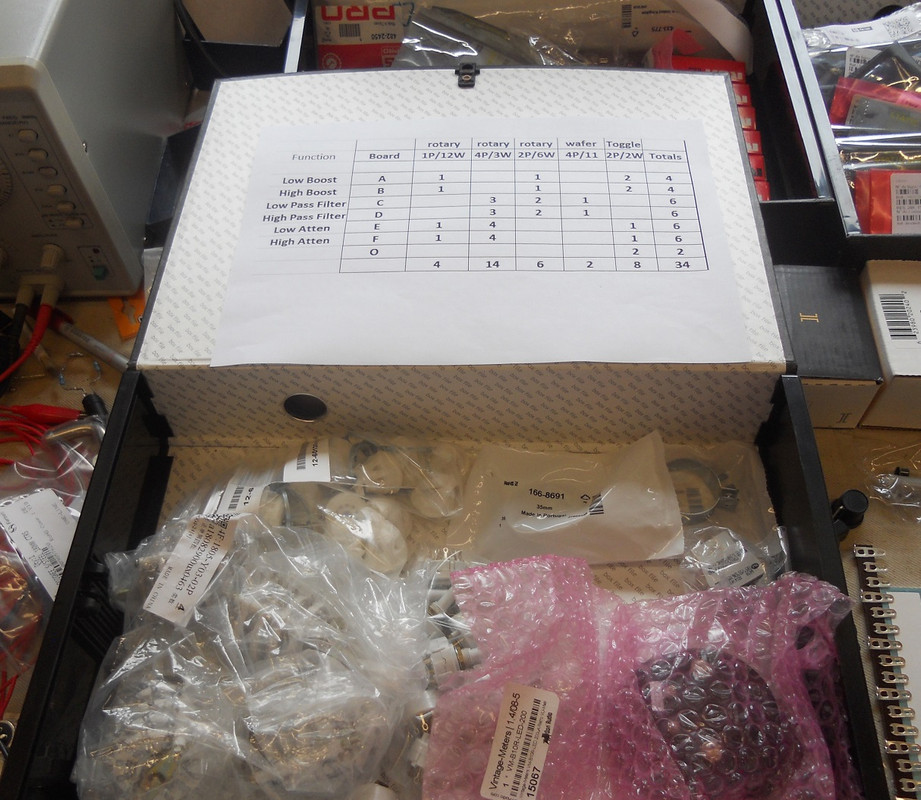 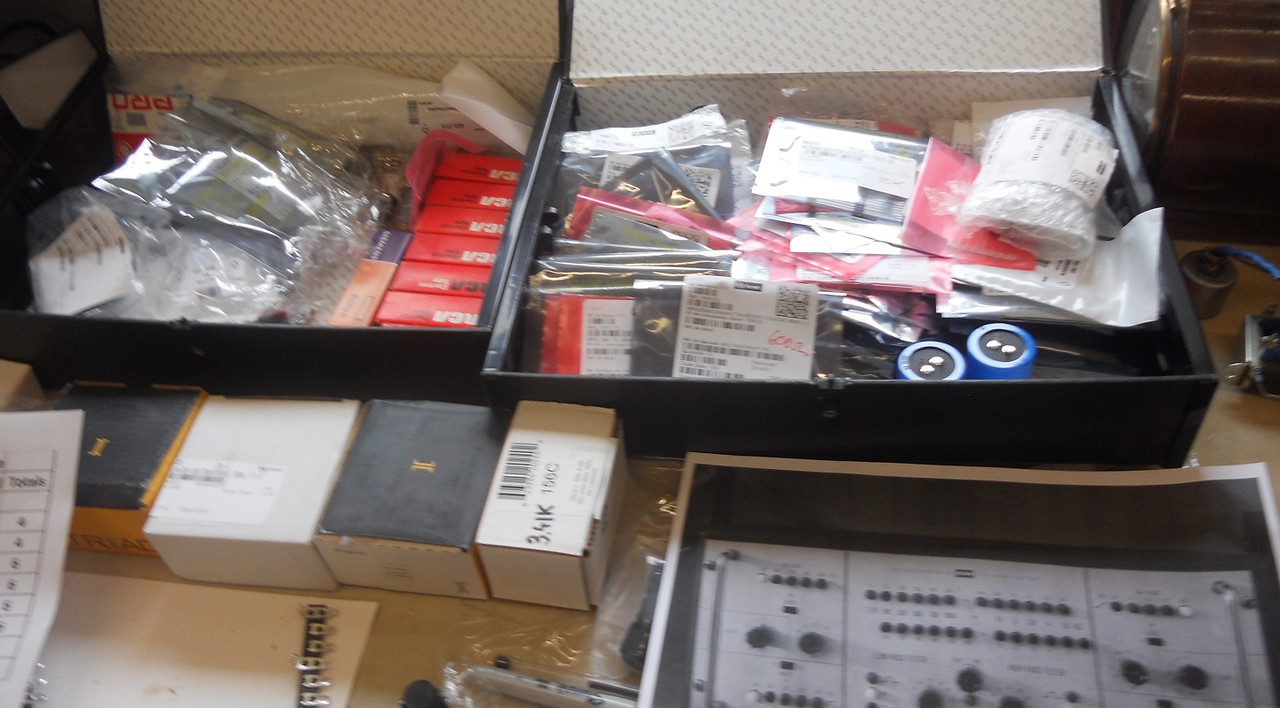 This is the first time I have entered the exotic world of E196 resistors often to find they are cheaper than usual (less demand I guess?)

Getting the components is the easy part, every decision I take from now on will have consequences down the line, so wish me luck.

Good luck on your journey, Dave!

This project is still very much alive but has been delayed due to moving.

I decided to redraw the schematics for use with toggle and rotary switches as push buttons are so expensive. 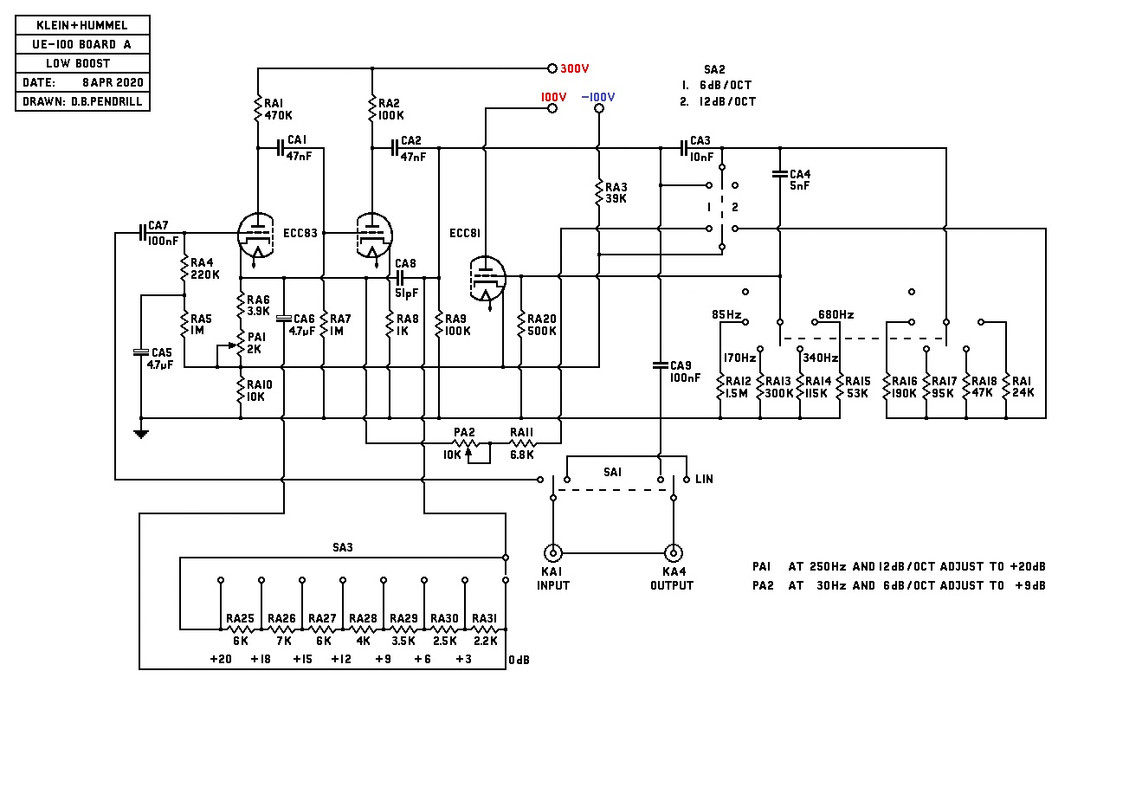 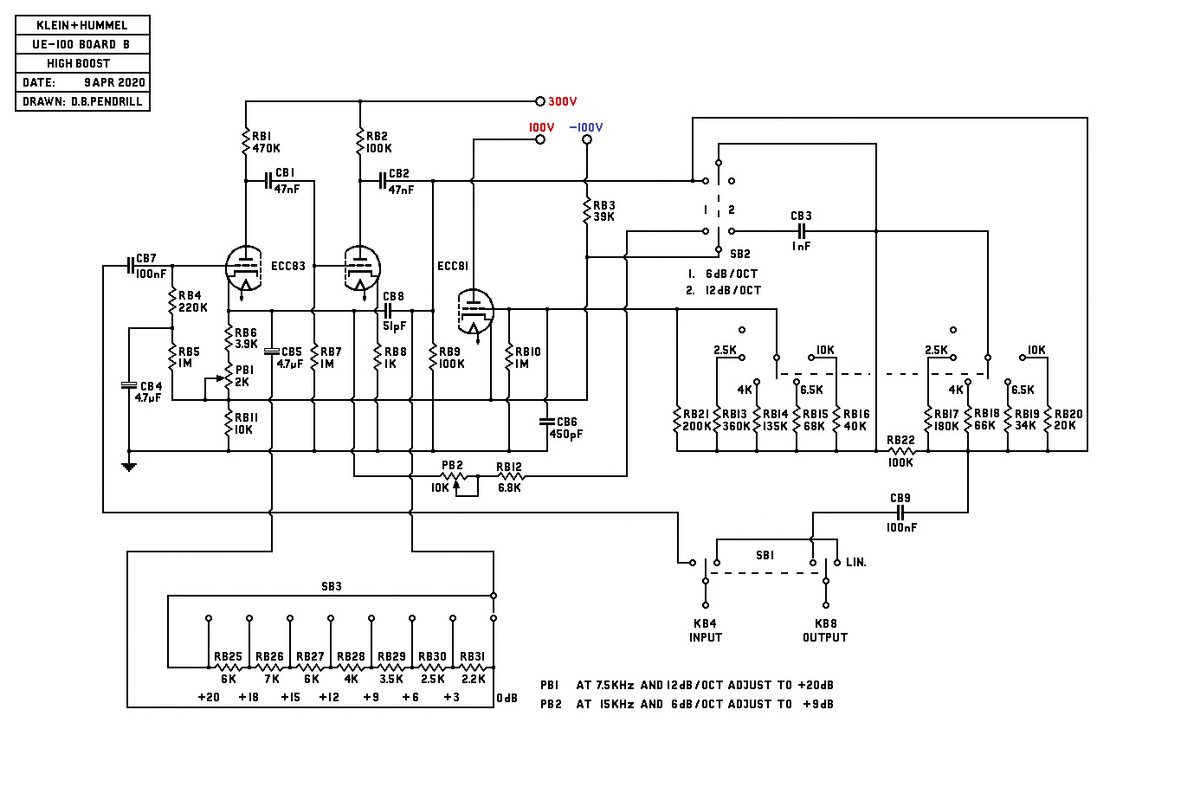 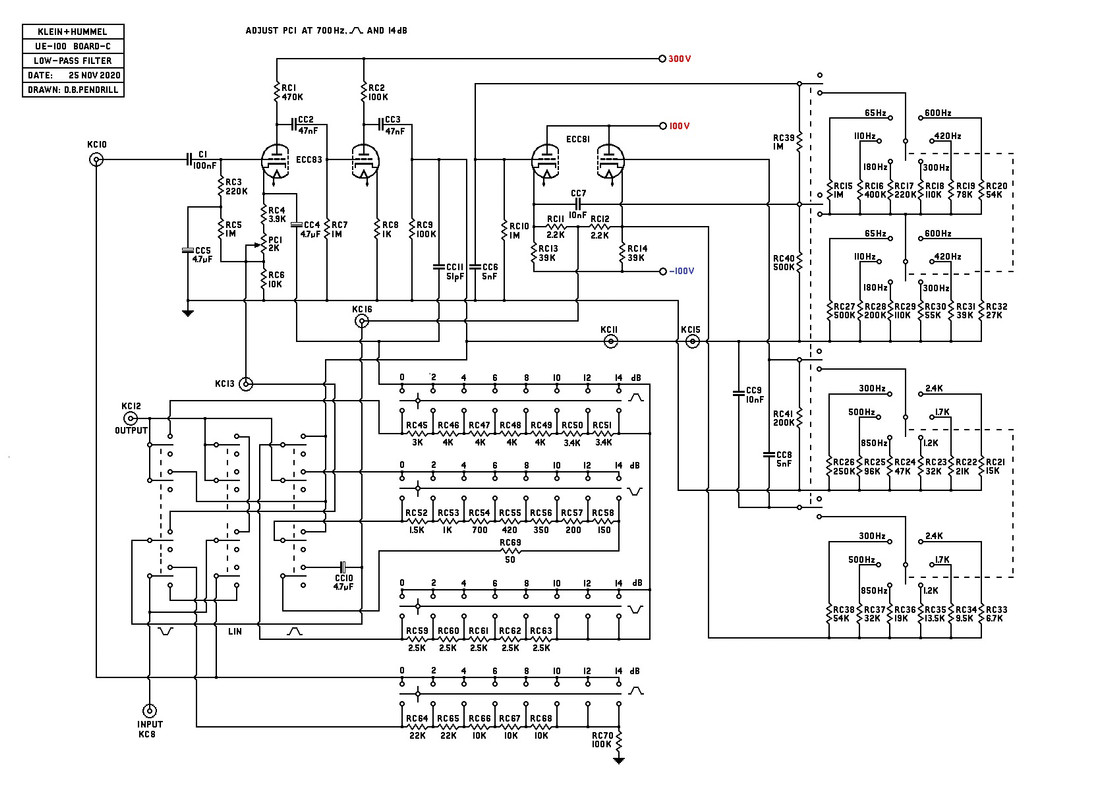 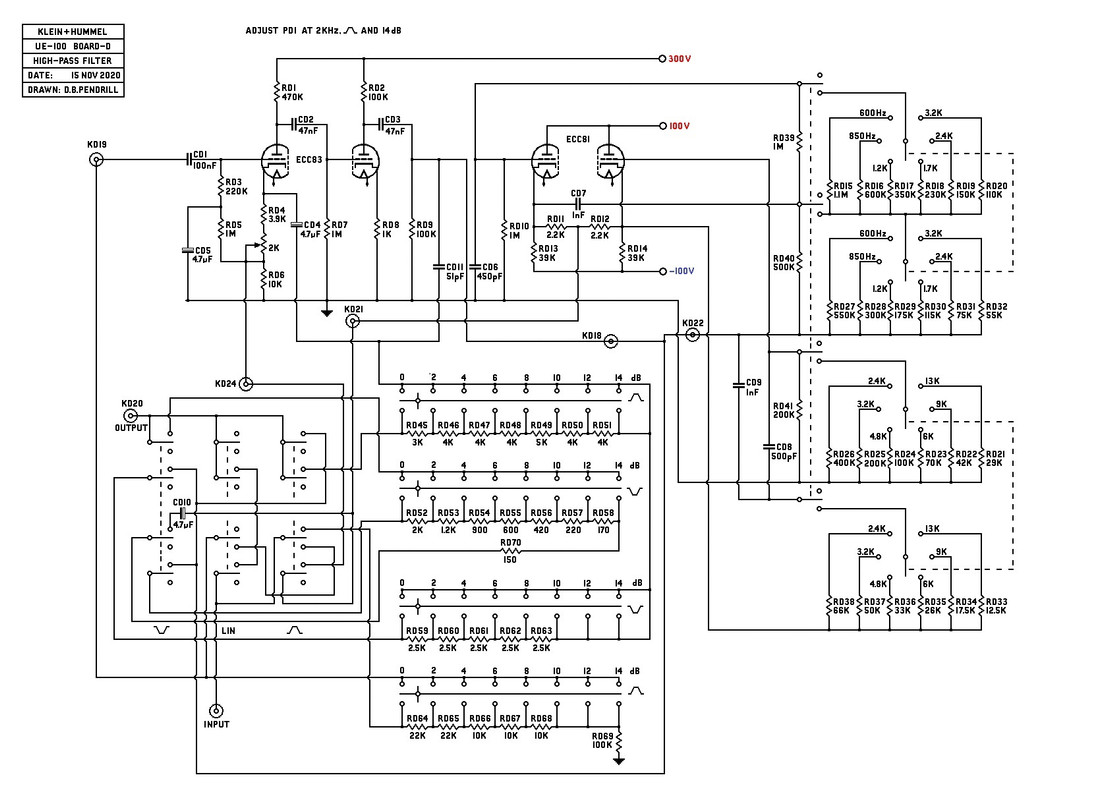 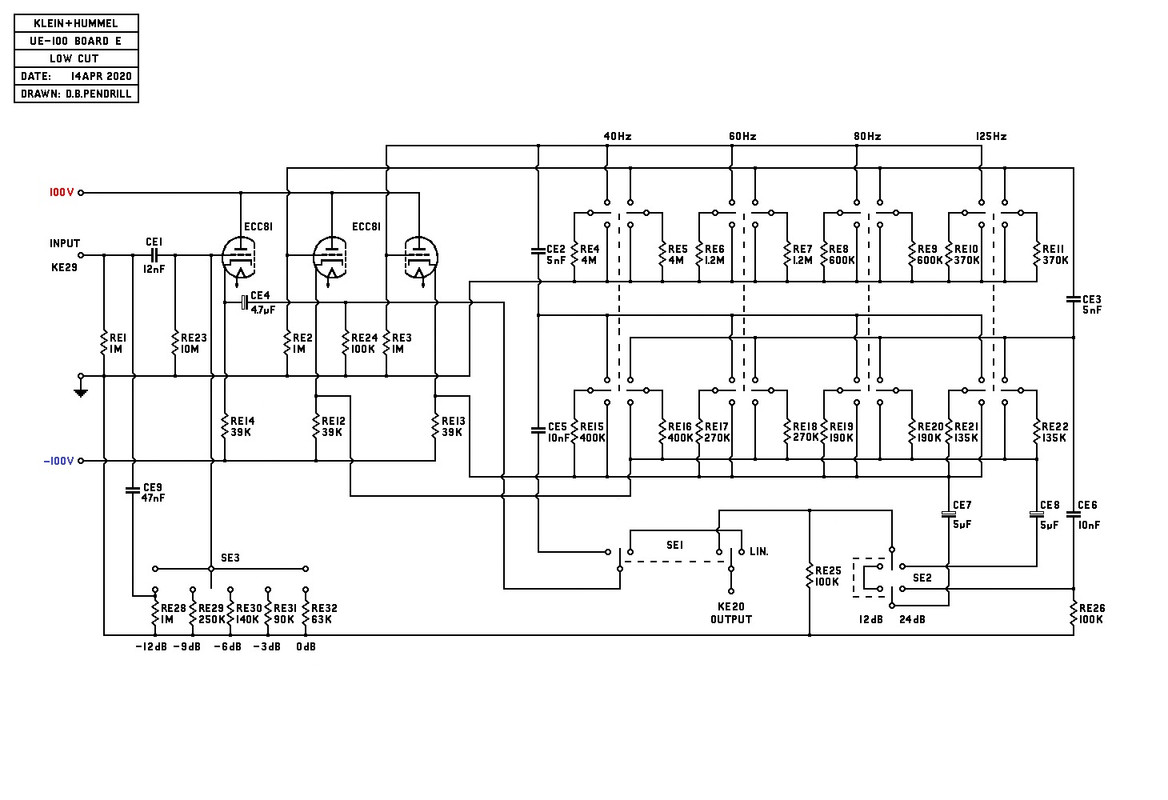 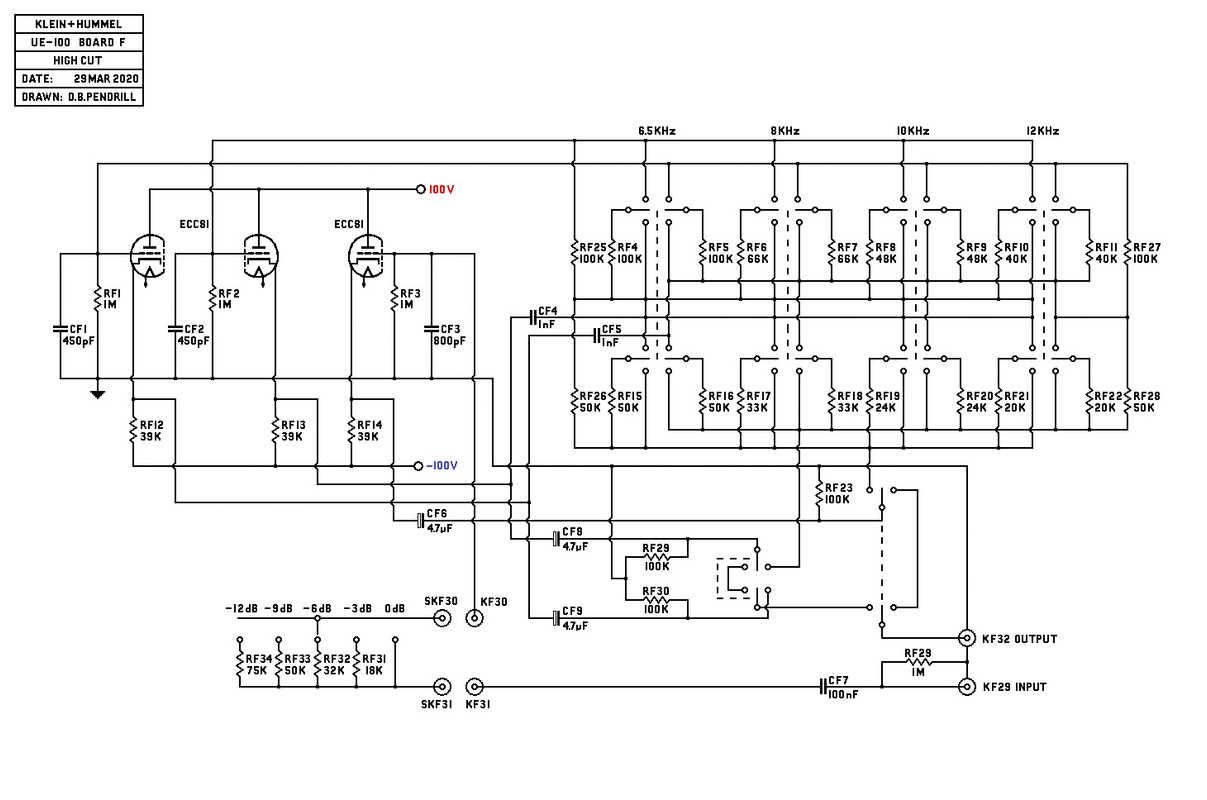 The rest of the schematic is straightforward so no need to redraw.

The front panel can now be started as I now know how many switches have to be fitted.

I only have internet access for a couple of hours a week so can't promise to reply quickly.

Can't wait to see that coming through! Good luck Dave and damn you are adding more projects to my list!
You must log in or register to reply here.