What if you opened up a Manley Reference C and ...

Has anyone traced this microphones circuit?
Is it a copy of something or is it somewhat different?

abbey road d enfer said:
It's not skimping. It's just using modern parts that fit within the constraints of industrialized manufacturing.
Are people who use high-quality film caps skimping over using PIO?

How can you be sure that what you perceive as more "direct" is not an artificially "enhanced" transcription?
Click to expand...

Not skimping - I understand. Regarding the "more direct" sound, yes you got a point there. It all comes down to taste really.

The picture is not from me but should 100% stock. But I can open mine (unmodded) up and send some pictures later, after I'm done tracking some vocals tonight.
X

kingkorg said:
I see nothing wrong with those capacitors there. It's C0G (NPO) capacitor.

Neve gear, and Neumann mics have tantalum capacitors in signal path, and people still use them.
Click to expand...

cheap ceramics and NP0/CoG how do you tell them apart?

gyraf said:
I'll see if I can dig it up, but there was a late 1960'es AES paper on microphone sound that speculated if the signature sound of the u47 is really about the VF14s always being so microphonic. Which makes me smile every time the selfproclaimed microphone specialists over at GS talk about how important it is to find a tube with no microphonics

VERY INTERESTED!
FWIW there were two AES papers in the last ten years (I think) on a similar subject, one about the selection of tubes for phono preamps and another on "why tube amprifiers have fat sound".

FWIW I installed a polystyrene cap instead of a capsule in a microphone the body and grill were installed and the cap worked as a low output level capsule. I could record sound
Others have posted about microphonic parts.

Nice links!
Even the mic input xfmr on a Neve module can be that microphonic, hence it's shockmounting.

..still looking, found that my indirect university AES subscription expired.. pretty sure I saved the article somewhere though..

Hey, a little late, but as promised. Here the pictures of my sE T2. Looks well designed to my (layman's) eye, and it does indeed have those ceramic (NP0?) coupling caps...

Let me know what you guys think.. 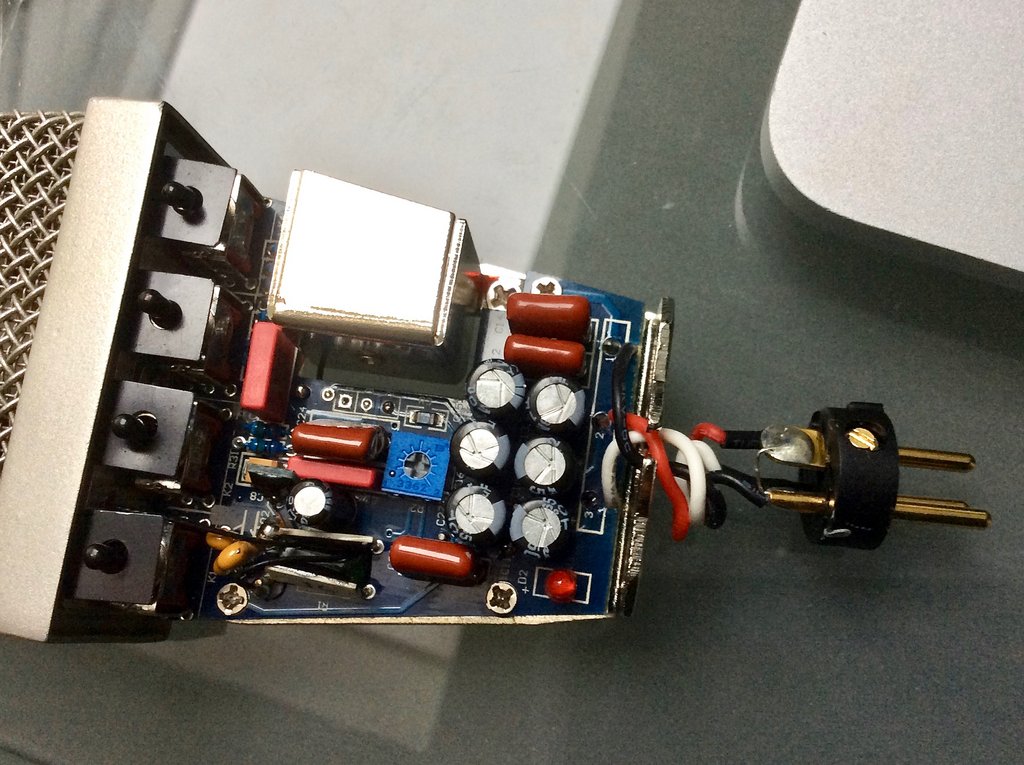 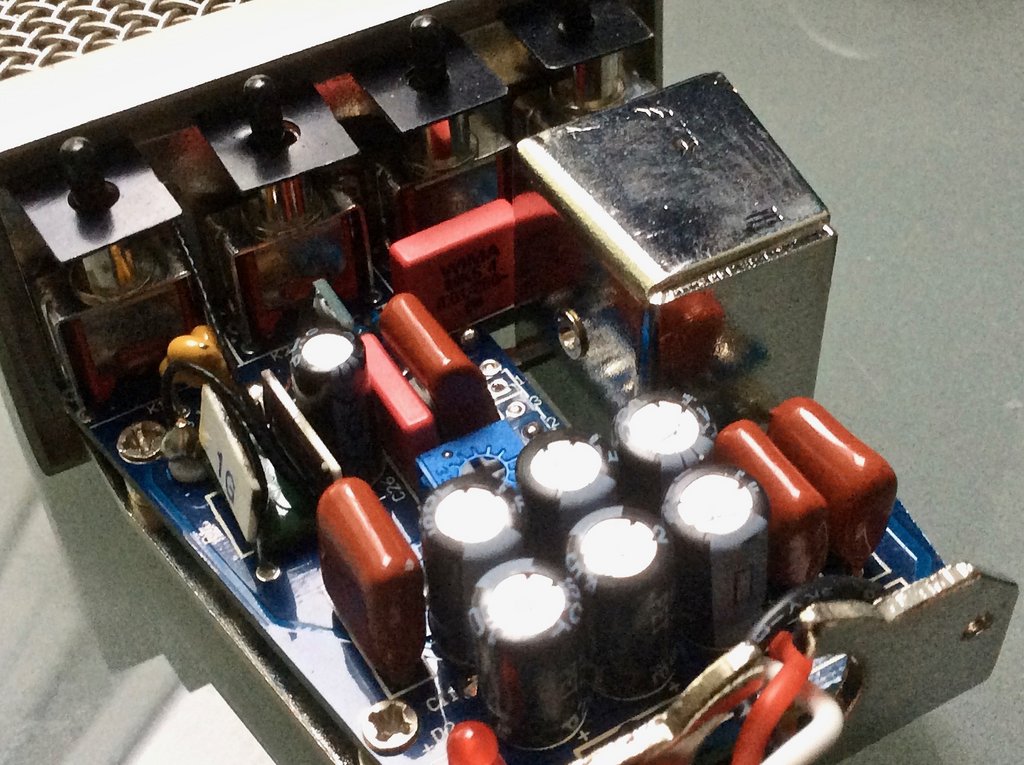 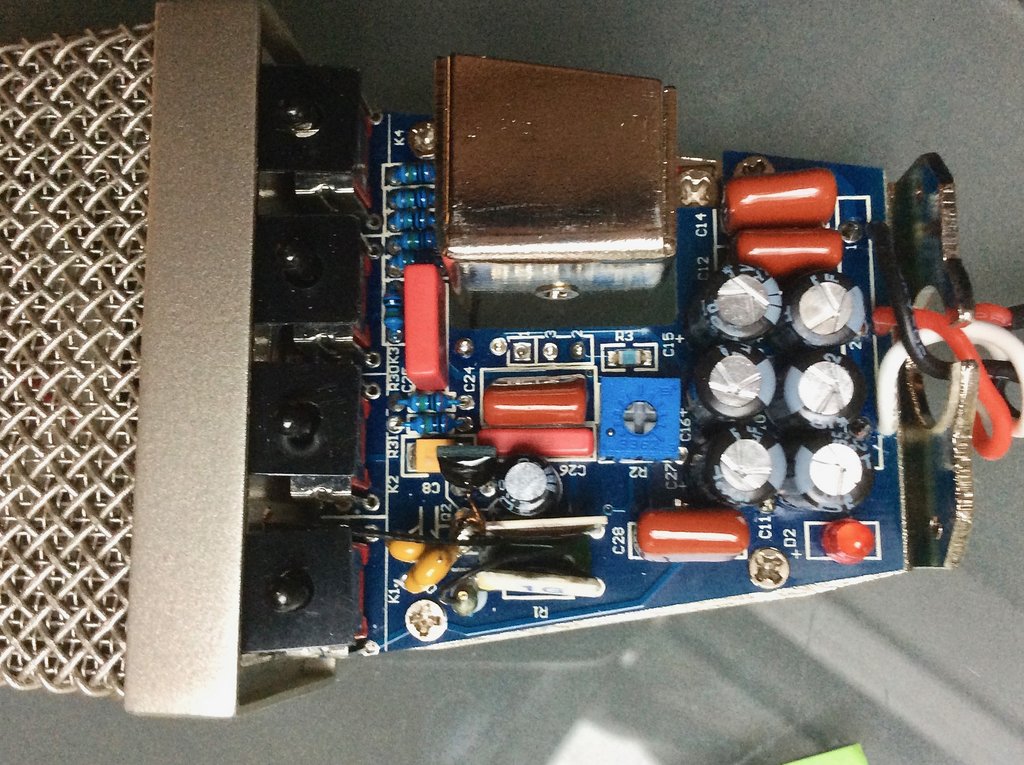 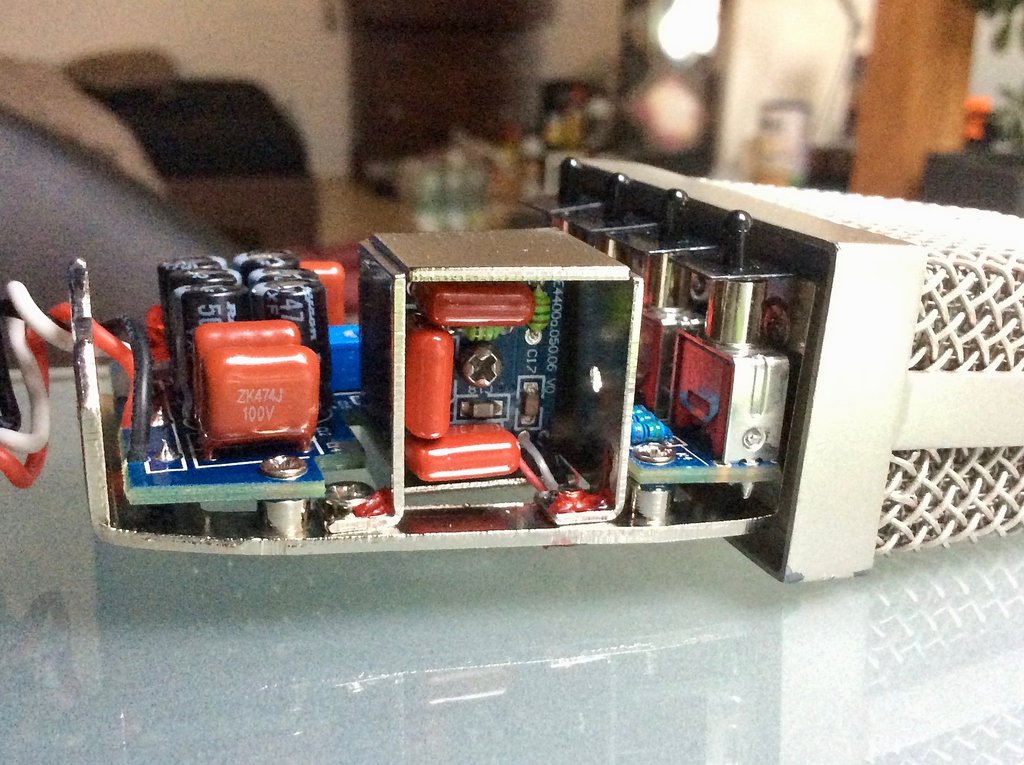 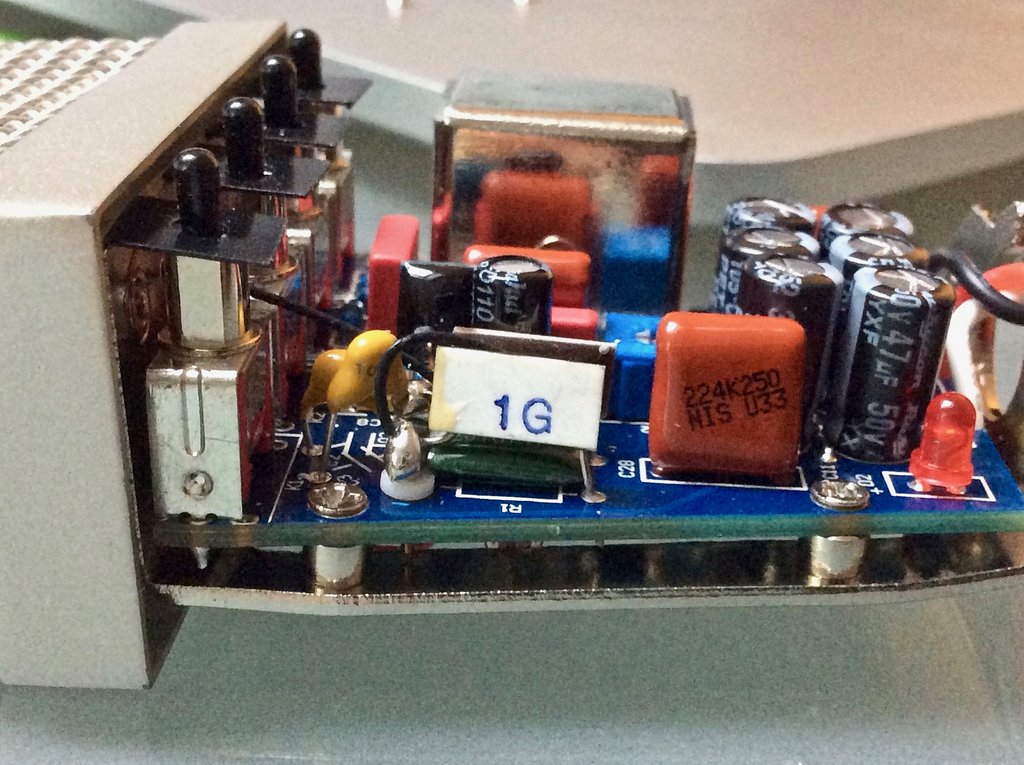 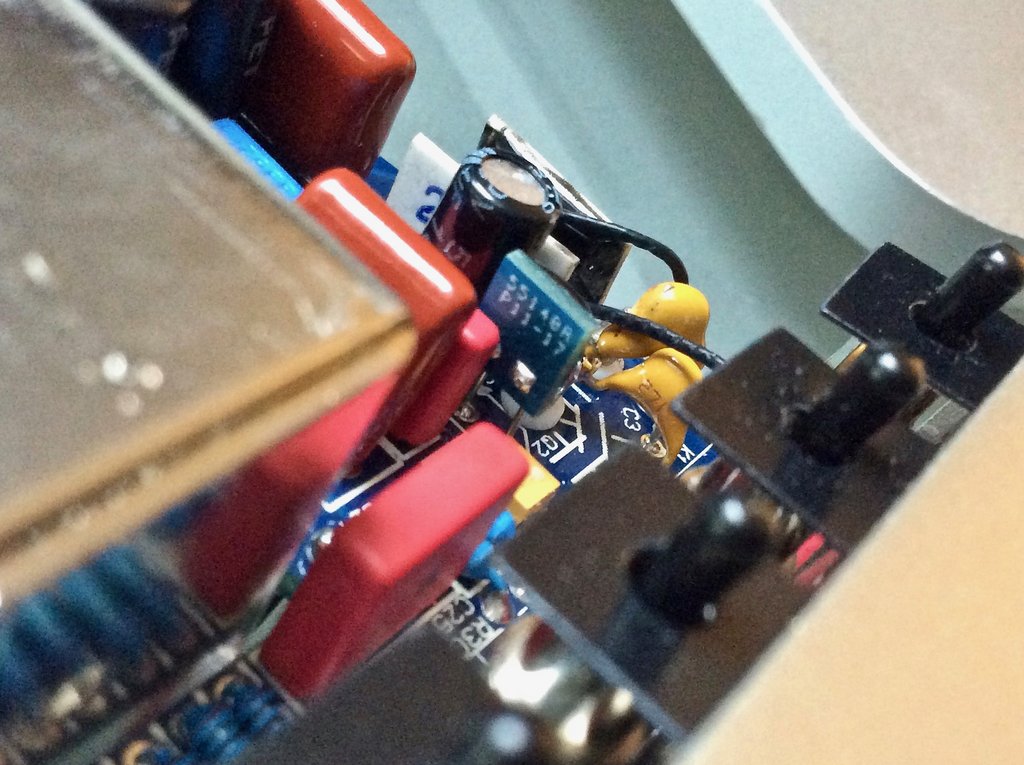 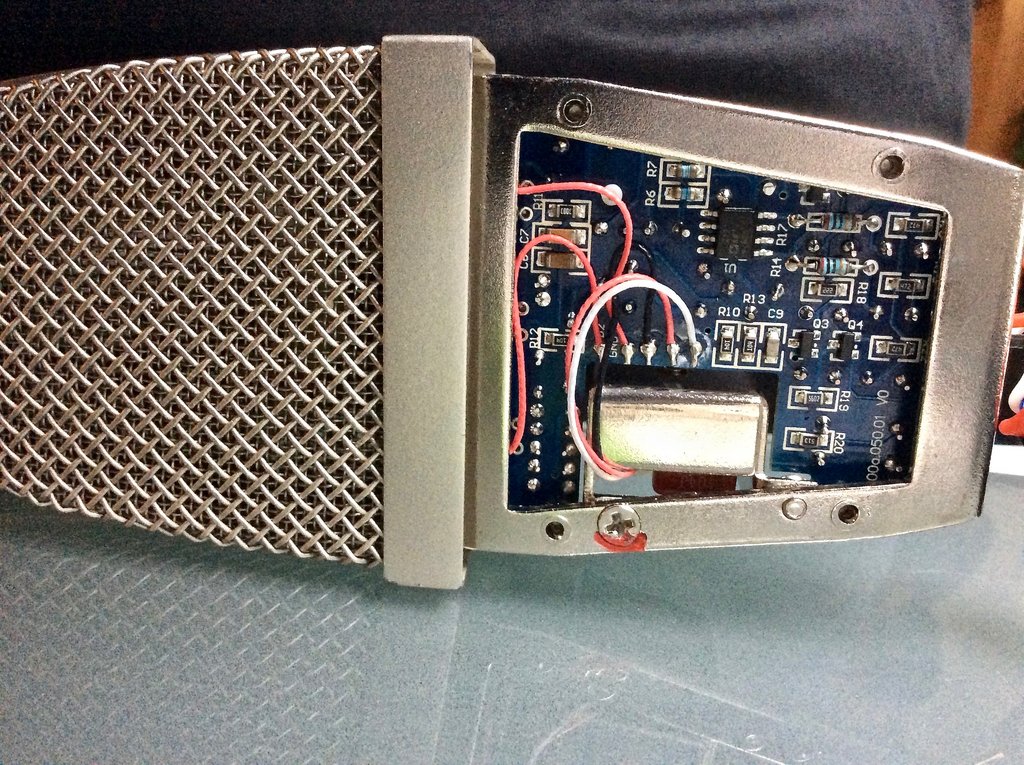 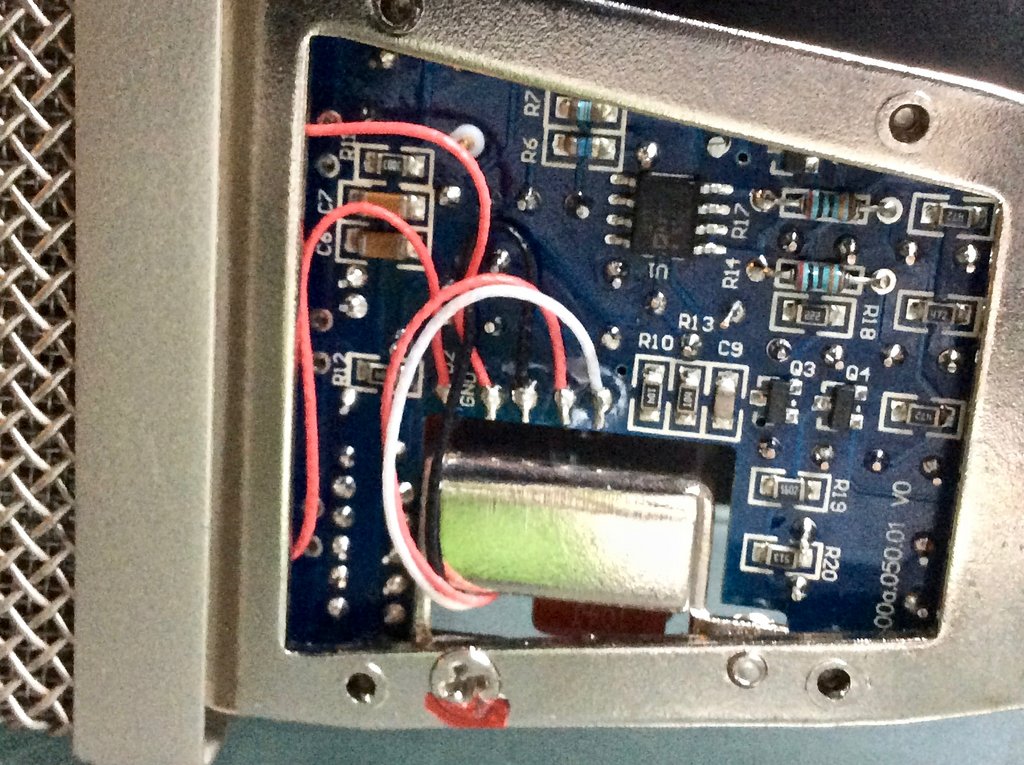 A guess
Looks like it uses an epoxy? covered SMD JFET on a small PCB.
A

Wow, what a pleasure.... a (partly) screened oscillator according to the rules.
D

kingkorg said:
Well, the capsule in Manley Reference C is cheapest capsule available, found in Sterling Audio ST51 for example. So i wouldn't be surprised if they used 0.1$ cap instead of 0.2$ cap.
Click to expand...

Could you tell me which capsule that is?

afaik its from Feilo / Shuaiyin. i thought its their 6 micron 35mm capsule with both sides mylar but only one side gold sputted. but the Sterling Audio is supposed to have a 32mm capsule i think.. but i could be wrong.
K

Icantthinkofaname said:
It almost pains me to say that I prefer $100 and $200 mics.
Click to expand...

There are a lot of great mics in the $100 and $200 price range nowadays, and I think some of them perform as well as $2000 or $3000 mics.
The high prices don't necessarily reflect a better sound or performance, they reflect a brand, and hype or a specific market target.
Some of the so called High End Companies are selling the same OEM chinese mics sold much cheaper by other companies, and I take with a pinch of salt the statements that their QC is better, I would have to see to believe. Also QC doesn't justify a $2000 diference.
Look at some of the present Telefunken offerings, another example...

It's not hard or expensive to do a quality condenser microphone, the technology is already established for many years, the U47 was released 74 years ago and has been 54 years for the U87.

Whoops said:
The high prices don't necessarily reflect a better sound or performance, they reflect a brand, and hype or a specific market target.
Click to expand...

You're an iconoclast!  ;D

Definitely,
Do you join me?
A

I just bought a used 51 for 55€ i know its pretty steep for a used one as they usually go for 30$ or so but here in europe theyre hard to come by..

I cannot recall where i read that the capsule is 35mm from feilo / shuaiyin but it must have been somewhere trustworthy enough to be in discussion with them for a sample order of their 35mm capsules lol.
They seem to sell different capsules for FET and tube circuit which differ in polarization voltage. Never heard of different capsules for fet and tube tho..

Anyway i checked sterlings description and they say their capsule is 1.25inch oven baked all brass capsule which would make it 32mm
And manley says their capsule is a 34mm capsule which is dual sided mylar but only one side is gold sputtered..
I know you have a lot more experience in this than me but did you compare them side by side or how do you know theyre the same?

Dont get into published specs. They just copy/paste different stuff they come by. Same goes for Manley. I know they are the same as i had them side by side, measured them and tested.

These are clearly one and the same. There are no special capsules for tube and fet mics. Who knows who actually produces the capsules, Feilo is probably just distributing. At the time, when Reference C appeared there weren't many manufacturees, and this one came obviously from the same one.
D

Thanks a lot! I might try building me a cheap manley ref c clone using the capsule snd maybe a modded t.bone 800 for the tube circuit.

For the feilo 35mm capsules. Im actually in discussion with shuaiyin who make capsules and mics for feilo alctron etc.. But what i found really odd was when the sales representative asked me if i want the capsules for fet or tube and upon asking whats the difference the response was that they would differ in polarized voltage..
Maybe the optimum polarisation voltage from the circuit is differs from the capsules? Idk..
I never heard of different cspsules for tube or fet and as you say there are none that makes it pretty odd why they asked me that.
I might 2-3 capsules anyway to try them out.
Should be the same 35mm capsules advanced audio and chunga sell.
K

It would be a real shame not to use this body. Looks amazing, great build quality, and a lot of the sound comes from capsule surroundings. It's the body i used in my build, the picture is in some of my previous posts in this thread. You would need to remove a thinner layer of mesh on the inside.

gyraf said:
I'll see if I can dig it up, but there was a late 1960'es AES paper on microphone sound that speculated if the signature sound of the u47 is really about the VF14s always being so microphonic. Which makes me smile every time the selfproclaimed microphone specialists over at GS talk about how important it is to find a tube with no microphonics

M
various similar faults on psu 12v lines - zener or capacitor or what?

Dec 17, 2020
mutetourettes
M
C
How to (properly) get started with analog circuit design